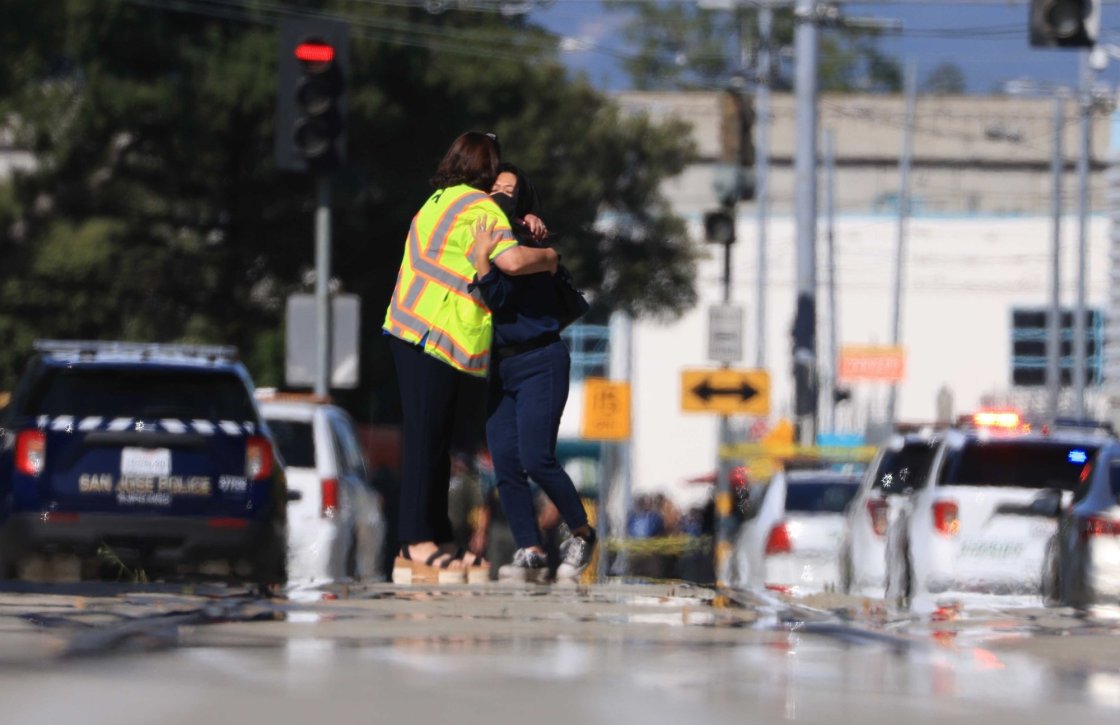 The gunman, an employee of the Valley Transportation Authority (VTA), is dead, Davis said. He has been identified as Sam Cassidy, a law enforcement source with knowledge of the investigation confirmed to CNN.

Mayor Sam Liccardo told CNN’s Jake Tapper the gunman was no stranger to the people he shot.

“It’s clear the victims and all the colleagues knew the shooter well,” Liccardo said.

Santa Clara County Sheriff Laurie Smith said the victims worked together and were there this morning together.

Davis said law enforcement officers didn’t exchange gunfire with the gunman and investigators believe he took his own life.

“I know for sure that when the suspect knew the law enforcement was there, he took his own life, our deputies were right there at that time,” the sheriff said. The deputies were there quickly because the sheriff’s office is next door, she added.

Smith said deputies and San Jose police officers ran into a building as the shooting was continuing “and I know that it saved many lives.”

At least one of the wounded is in critical condition, Davis said.

Investigators are looking into the gunman’s motive, he said.

Police also received information about explosive devices inside the transit building, which the bomb squad is investigating, Davis said.

In addition, a house that erupted in flames in San Jose around the same time as the shooting is believed to be the gunman’s home, a source close to the investigation told CNN.

The shooting began just after 6:30 a.m. PT when several 911 calls reported shots fired near a VTA control center, a hub that stores light rail trains and a maintenance yard, Davis said. VTA employees were among the victims.

The shooting occurred in the VTA rail yard — not the operations control center — at a time when light rail was starting up for the day, VTA Board Chairperson Glenn Hendricks said. The yard is where the VTA vehicles are maintained and dispatched.

“A horrible tragedy has happened today, and our thoughts and love goes out to the VTA family, the organization and what they’ve had to go through,” Hendricks said.

Light rail service was suspended for the day as of noon, the VTA said, as the crime scene investigation limited its ability to provide service. The VTA is a public transit service that operates bus and light rail services in the Santa Clara Valley and employs about 2,000 workers.

The mass shooting is the 232nd incident in which at least four people were shot in the US so far this year, according to a tally by the Gun Violence Archive.

The Bay Area is no stranger to such spurts of violence; in July 2019, a 19-year-old gunman opened fire at the Gilroy Garlic Festival, located about 30 miles from San Jose, killing three people and wounding more than a dozen.

Mayor Liccardo said in an interview with CNN affiliate KGO that a fire was reported at the home of the gunman, though he did not specify the location.

“That is certainly the information that I have — is that there was a fire at the shooter’s home, there was nobody found inside the home, thank God,” Liccardo said.

Firefighters responded to a fire at a home in the 1100 block of Angmar Court in San Jose at 6:36 a.m. local time, according to tweets from the San Jose Fire Department. The time was just minutes after police were called about the shooting at the VTA facility, about 8 miles away.

Crews are also responding to a residential structure fire on the 1100 block of Angmar Ct. Currently at 2 alarms. TOC 6:36 am pic.twitter.com/IWWqhd4Lmt

Video shot by a neighbor showed a home with smoke pouring out of it as firefighters respond to the blaze. The neighbor, Duk Kyun Suh, started recording the video early on during the fire. In it, firefighters appear to be just arriving on the scene.

It took firefighters about an hour to extinguish the two-alarm fire, which caused heavy damage and left the structure uninhabitable, the fire department said.

When asked about the house fire in a media briefing, Smith said the San Jose Police Department was working on that part of the investigation.

The cause of the fire is still under investigation, but there were no injuries to civilians or firefighters, according to Erica Ray, spokesperson for the San Jose Fire Department.

Anxiety, fear among employees and family

Employees and their families expressed anxiety and fear in comments to CNN shortly after the shooting.

Michael Hawkins Sr. gathered at a reunification site to look for his wife, Rochelle Hawkins, a mechanic at the VTA facility. She left him a message from a coworker’s phone saying that she was OK but had dropped her phone while running to safety, he said.

“I’m just here for my wife and hoping she’s OK and whoever else in there is OK,” he said.

Billy Cantillas, who has worked at the VTA facility for 22 years, said he had just started his shift when a coworker told him there was a shooter at the site, so he left the building. He didn’t hear or see anything, but he said he was terrified.

“I’m scared, you know? I’m thinking about the people that got shot. It’s terrible,” he said.

Gov. Gavin Newsom, after meeting with family members of VTA employees, expressed frustration at continued gun violence in the US and called for politicians to take action.

President Joe Biden called for Congress to act on gun law reform. He sent his sympathies to the victims’ families.

“There are at least eight families who will never be whole again,” he said in a written statement.

“There are children, parents, and spouses who are waiting to hear whether someone they love is ever going to come home. There are union brothers and sisters — good, honest, hardworking people — who are mourning their own,” Biden said.

Agents from the Bureau of Alcohol, Tobacco, Firearms and Explosives (ATF) and from the Federal Bureau of Investigation responded to the scene.

The ATF has brought in five bomb-sniffing dogs to assist in the search for any potential explosives.

The agency is also providing investigative resources to trace firearms and ballistics evidence in an effort to link it to other firearm crimes that might be involved, said Joshua Jackson, an assistant special agent in charge of the ATF’s San Francisco Field Division.

Mayor Liccardo, who also serves on the VTA board, referred to the shooting as a very dark moment for the city.

“This is a horrific day for our city, it’s a tragic day for our VTA family,” he said. “We know that so many are feeling deeply this loss of their loved ones and their friends.”

The president of the Amalgamated Transit Union International, a labor union that represents transit workers, said the union is “shocked and deeply saddened” by the mass shooting.

“Our hearts and prayers are with our sisters, brothers, and their families at Amalgamated Transit Union (ATU) Local 265,” President John A. Costa said. “We are working to provide support and assistance to the victims’ families, and everyone impacted by this tragic event.”

US Secretary of Transportation Pete Buttigieg said his “heart breaks” for the families and colleagues of the victims.

“Transit workers have kept the traveling public safe this past year — we must do the same for them,” he said.