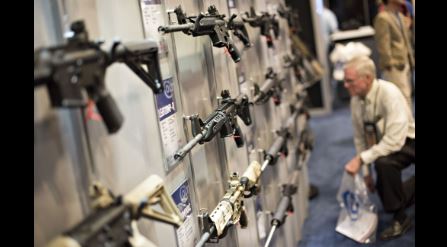 Assault weapons have not been legal in the state since 1989.

“I’m very interested in it. I think it’s a positive move. They do not represent or contribute to the level of violence that we experience in the country and in our communities today,” said John Bianchi, the owner of Frontier Gunleather in Palm Desert.

Assault weapons include semi-automatic firearms like AR-15s, but not bazookas or machine guns.

According to the Palm Springs Police Department, there have 7 been assault weapon arrests since 2018.

“The majority are handguns. They’re going to be some type of handgun used in your street robberies in your home invasions. Sometimes there are no weapons at all, but in terms of assault weapons it’s not a very frequent issue,” said Lieutenant Hutchinson with the Palm Springs Police Department.

In Indio, six assault weapons have been taken off the street over the last two years.

Since this issue is rare, police staff members have questions about the need for these types of guns on the street.

“Bullets that are used in these weapons can be used for other rifle means, people that go hunting or target shooting, but why would you need a bullet that goes through bullet proof vest,” said Ben Guitron with Indio Police Depaetment.

Whether these weapons are legal or not, local departments believe more accountability is needed for those breaking the law.

“I think that absolutely starts with tougher penalties, and tougher responses to those who are in possession of these firearms illegally because that’s where the majority of our law enforcement is involved,” said Hutchinson.

Guitron agreed, and said that criminal penalties have changed throughout the last year.

“Right now, especially during COVID, there’s weapon violations where they didn’t even go to jail. You know, we have people who are committing serious crimes, weapons being one of them, and they’re not even spending even 12 hours in a county jail.”

As these weapons become more available, the Indio police department asks the public to notify them if they believe these guns have fallen into the wrong hands.

“Specifically if they’re currently on any pending violations or on parole or probation or they know they shouldn’t have those guns need to report it to their police department,” said Guitron.