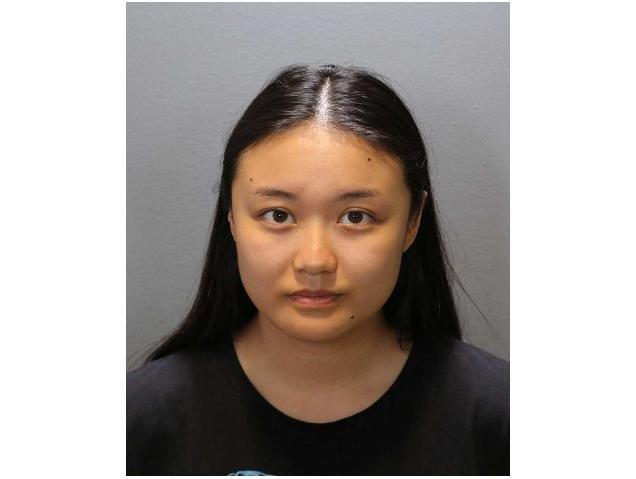 Bail was reduced Friday from $500,000 to $100,000 for a woman charged as an accessory in the alleged road-rage shooting death of a 6-year-old Costa Mesa boy on an Orange County freeway.

If Wynne Lee, 23, manages to post bail, she will be required to surrender her passport and will be barred from leaving the state without permission. She will also be banned from driving, will have to submit to GPS monitoring and will be barred from having any contact with co-defendant Marcus Anthony Eriz or the family of victim Aiden Leos.

Her 24-year-old boyfriend remains jailed without bail. Eriz is alleged to have fired the fatal shot from Lee’s vehicle while she was driving May 21 on the Costa Mesa (55) Freeway in Orange.

Authorities say the pair got into a road-rage confrontation with Aiden’s mother on the freeway, then maneuvered behind her car, allowing Lee to fire a shot into the rear of her vehicle. The bullet traveled through the trunk and struck Aiden, who was in a car seat on the rear passenger side of his mother’s car.

The boy’s mother and teenage sister were in court Friday morning. Senior Deputy District Attorney Whitney Bokosky said they were concerned about their safety if Lee made bail.

In agreeing to reduce bail, Orange County Superior Court Judge Larry Yellin noted that Lee is not personally accused of committing any type of violent act and has no criminal history. However, he noted that even after the fatal shooting, she allowed Eriz to continue riding in her car with a gun, which he allegedly brandished at another motorist days after Aiden’s death.

“Allowing that gun and that person back in her car and committing what appears to be another crime … that is concerning when I consider the danger to the public and to the victim,” Yellin said.

Lee’s attorney, Tom Nocella, had asked that bail be reduced to $50,000. But Yellin said the additional road rage allegation was a factor in setting it at double that amount.

Lee will be restricted to the home of her parents if she is released, but she would be allowed to go to counseling appointments. Yellin told her that she would not be allowed to drive because “both of the most concerning acts of this case were when you were behind the wheel of the car.”

Yellin also extended his condolences to the family of the victim.

“You have our sympathies,” Yellin said. “What a tragic and horrible thing.”

Lee was born in Diamond Bar and has resided in Southern California for her entire life, Nocella said in court papers. She was working at Gerber Collision as a receptionist and living with Eriz in a Costa Mesa apartment at the time of the shooting.

Last week, Eriz and Lee both pleaded not guilty to the charges stemming from the shooting, and a pretrial hearing was set for Aug. 27.

Lee faces up to four years behind bars if convicted of a felony count of being an accessory after the fact and a misdemeanor count of having a concealed firearm in a vehicle. Three of those years would be in prison and one in jail.

According to prosecutors, Aiden’s mother, Joanna Cloonan, was driving her son to kindergarten in her Chevrolet Sonic about 8 a.m. May 21 when she was cut off on the freeway by the defendants, who were in a Volkswagen Golf Sportwagen.

Lee was behind Cloonan in the diamond lane before swinging over to the fast lane and then accelerating at an “extremely high rate of speed” to get in front of Cloonan, prosecutors contend in a bail motion first obtained by City News Service.

“Wynne Lee motioned to the victim vehicle a `peace sign’ with her hand and continued driving,” prosecutors alleged in the motion for higher bail.

A few miles later as Cloonan was attempting to merge over to the eastbound Riverside (91) Freeway, she passed the defendants and was “still angry about being cut off and put up her middle finger at the two as she passed,” according to prosecutors. “She then heard a loud bang to the rear of her vehicle and heard her little boy in the backseat say, `Ow,”‘ the motion says.

Cloonan immediately pulled over and saw that Aiden had suffered a chest wound, prosecutors said. The tot was pronounced dead at 8:39 a.m. at Children’s Hospital Orange County.

In an interview with investigators on June 6, Eriz said he “was angry after being `flipped off’ by Ms. Cloonan, so he grabbed his loaded Glock 17 9mm and racked a round,” according to the motion. “He then rolled the passenger window down and took a shot at her vehicle. After shooting the victim, the defendants continued on to the 91 eastbound and on to work in the city of Highland.”

The couple worked a full day at the auto shop and returned home.

During the week of May 24-28, the two got into another “altercation on the freeway,” prosecutors allege.

“As Wynne Lee was driving on the 91 eastbound on the way to work with defendant Eriz as her front passenger, a driver in a blue Tesla did something to make defendant Eriz angry, acting aggressively,” prosecutors allege. “Defendant Eriz again took out his gun and brandished it to the driver of the Tesla. That driver told the defendants that he had called the police and then he drove away.”

A co-worker told Eriz on May 28 that it looked like their car was the suspect vehicle police were seeking, prosecutors said.

Eriz “claims that at that time, he looked on the Internet and saw the story about Aiden Leos’ death,” prosecutors allege. “He said he `immediately’ knew he was responsible for the boy’s death. He then told Wynne Lee about his revelation.”

Prosecutors allege that after May 28, Eriz hid the Volkswagen in a family member’s garage and did not drive it again, instead driving his red truck to and from work. He also allegedly shaved his “substantial beard” on June 3 and “started to wear his long hair back in a tie,” according to prosecutors, who said both defendants also applied for new jobs.