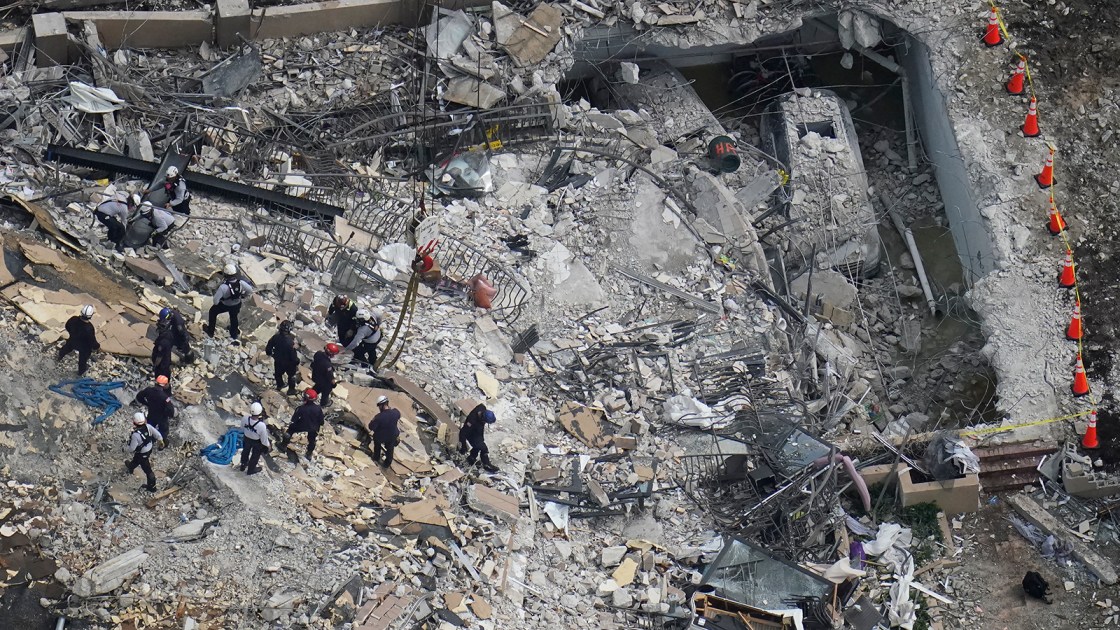 While families endure a fifth day of anguish waiting learn the fate of 150 loved ones, a sobering reality is setting in.

“We know time is of the essence,” Maggie Castro of Miami-Dade Fire Rescue said Monday.

“We’re still in a rescue mode, but as you can imagine, we’re starting to understand that it’s going to be less likely that we’re going to be finding survivors.”

No survivors have been found in more than a day in Surfside, Florida, where 55 condo units of Champlain Towers South crashed to the ground Thursday.

More than 400 rescue workers are assigned to the search, with about 200 scouring the wreckage at any given time, Miami-Dade Fire Rescue Chief Alan Cominsky said.

“It’s a strategic process,” he said. “We can’t have one squad working right on top of another. So we have to space out. We have to have different components.”

The search has been treacherous, as rescuers have been stymied by fire and the constant threat of further collapse.

But just like the rescue workers, friends and families of those missing are not giving up.

“We’re still praying for a miracle,” said Fortuna Smukler, who has two friends missing after the collapse.

“We hear stories of people being found up to 15 days later, so we’re still holding out.”

Mark Eiglarsh says he is torn between hope and realism. His close friend since childhood, Jay Kleiman, grew up in the building. Kleiman’s mother and brother are also missing, Eiglarsh said.

“We don’t know if he’s alive or not,” Eiglarsh said Monday.

“I try to speak of him in the present tense, like he’s still here. But I’m having challenges being intellectually honest with myself — knowing that it’s been so many days, and the odds are not very good.”

He said Kleiman lived in Puerto Rico, but came back to Florida to attend the funeral of another childhood friend, who recently died of Covid-19.

Kleiman was staying with his mother and brother when the collapse occurred.

“He always had a huge heart — so compassionate,” Eiglarsh said.

“We would play football together. I remember missing passes, or not tackling properly, and he’d come over and he’d be the first one to high-five and say, ‘Don’t worry about it. It’s OK. It’s just a game.’ So he taught me a lot.”

Why the search is so dangerous as crews dig deeper

“You’re de-layering all the debris up top, and you have to be very careful with it,” Gomez said.

Removing pieces can affect other pieces, and rescuers “don’t want to cause more damage if they are, in fact, alive there.”

Over the weekend, rescue workers completed a 40-foot-deep, 125-foot-long trench in hopes of finding survivors.

“It gives the men and women an ability to … get underneath some of the rubble through a different perspective,” the state fire marshal said.

“One of the pieces they were able to pull out because of the trench weighed about 12,000 pounds,” Patronis said.

“Once they pulled it out the back side, this 12,000-pound piece was all scorched. That is where the fire was underneath.”

The mayor said rescuers are also using sonar, cameras and K-9s to try to find anyone beneath the rubble.

Some families have grown impatient and channeled their anger toward search officials, Castro said.

“They’re looking for someone to blame. There is no one they can blame at this point. The emotions have to go somewhere. We understand that,” she said.

“We’ve asked the families that if you need to vent, you (can) vent at us.”

Families who want to visit the site of the collapse will be brought in by bus Monday afternoon.

Those who visited Sunday saw how dangerous the search operation can be.

“That is the perfect example of the situation we are dealing with,” he said. “It’s going to take time.”

And as search crews dig deeper, “most of the individuals have come up upon larger concrete areas and that will require heavy machinery,” Jadallah said.

Smukler, who has two friends missing, is also a city commissioner for North Miami Beach. She said residents have inundated her with questions since the tragedy:

“Is this going to happen to the other buildings? Is this something we can fix in the future for it not to happen again? Can we do some more soil testing? Can we do a moratorium?” she said.

While the cause of the collapse has not been confirmed, nearby city and county officials are scrambling to beef up inspections for older and high-rise condo buildings.

The Miami-Dade County mayor said officials will be reviewing buildings over 40 years old and more than five stories tall, “making sure everything is in order” with proper certification, Levine Cava said.

“We are immediately putting in plans to check 59 buildings that are either at the 40-year mark or have just went through the 40-year recertification,” Svechin said Monday.

“Everyone needs to know what is happening in every single community here, especially on the coast of Florida.”

The city of Miami sent a letter to buildings Friday urging new inspections for those more than six stories tall and more than 40 years old, city spokesperson Stephanie Severino said.

‘There are no words’

Of the 11 people killed, eight have been publicly identified.

Stacie Fang, 54, was the first victim identified Friday. She was the mother of Jonah Handler — the boy who was pulled from the rubble alive Thursday, her family said.

“There are no words to describe the tragic loss of our beloved Stacie,” the family said in a statement.

“The many heartfelt words of encouragement and love have served as a much needed source of strength during this devastating time.”

Authorities have not yet identified two of the victims.

“The process of identifying these victims is very difficult,” Levine Cava said.

“We’re going to be relying on DNA testing. And that is why we’ve already been gathering DNA samples from the family members. So they have all participated and provided DNA to assist us in the investigation,” the mayor said.

“This allows us to do rapid DNA testing on-site for bodies.”

Those missing are from at least nine countries, including six Latin American countries, and multiple faith communities.

The Greater Miami Jewish Federation offered to help community members with arranging funeral and burial services. In the Jewish tradition, burials are completed within days after death, but some victims might not be recovered in the coming days.

A 2018 report by the structural engineering firm Morabito Consultants “detailed significant cracks and breaks in the concrete,” the firm said in a statement Saturday.

The report didn’t say whether the structure was at risk of collapse, but the group said it provided an estimate to the condo association to “make the extensive and necessary repairs.”

The association retained Morabito again in June 2020 for the building’s 40-year repair and restoration process, according to the statement.

The firm said it “exclusively provides” engineering consulting services and does not provide construction-related services.

“We are deeply troubled by this building collapse and are working closely with the investigating authorities to understand why the structure failed,” Morabito Consultants said.

According to NPR, Rosendo Prieto, who worked as the town’s building official at the time, assured residents of Champlain Towers South that their building was “in very good shape” at a November 2018 meeting. NPR cited minutes from the meeting it obtained.

Two days before the meeting, Mara Chouela, a member of the condo board, forwarded a copy of a structural engineer’s report to Prieto that warned of “major structural damage,” according to an email released by the town on Saturday.

Prieto no longer works for Surfside and currently serves as the interim building official for Doral, another city in Miami-Dade County, according to the Doral website and a county document. Prieto has not responded to requests for comment from CNN.

In 2020, a structural engineer who inspected Champlain Towers South saw cracks and deterioration, but was not alarmed, the engineer told CNN on Monday.

Borden said nothing he saw during his hourlong inspection alarmed him. He said the observations were typical of coastal buildings of that age, and what he saw was consistent with the nature of reinforcing steel and concrete over time.

But he said these factors can become a danger when they are not maintained or repaired.

When asked about recent speculation that collapse may have started from the bottom, Borden said in that scenario, “the most likely or the most common would be the failure of a column.”

“The columns are one of the most robust parts of the building. They are designed to hold up the entire building. So something had to have happened to a column,” he said.

Residents raised concerns over tremors during construction of nearby building

Eliana Salzhauer, one of three Surfside town commissioners, said survivors of the collapse she encountered said they felt shaking during construction on a nearby building in recent years.

Salzhauer said some of the survivors told her they were bothered by the shaking of their building that occurred while a high-rise was under construction next door. They told her there was shaking, cracking and water leaking in the garage, she said.

“They were very traumatized and shook up,” Salzhauer said, adding she heard people saying the building “was shaking all the time,” during the construction.

“In hindsight, reading that report is very damning. You read that report you go, ‘My God. How could they miss this?'” Salzhauer said.

Magaly Ramsey, daughter of missing Magaly Delgado, said her mother had been concerned about shaking from the nearby construction.

And in an email to Prieto in 2019, condo board member Chouela said she was concerned the nearby construction was “digging too close to our property.”

“We have concerns regarding the structure of our building,” she wrote.