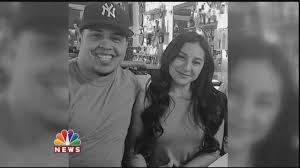 Four years after Jonathan Darling Reynoso and Audrey Moran went missing from the Coachella Valley, the six defendants charged with the murders were supposed to face a judge in a Riverside courtroom for a preliminary hearing: Abraham Fragoso, Manuel Rios, Eric Rios, Jesus Ruiz, Aaron Bernal, and Adilene Castanda. Only Bernal, Manuel Rios and Ruiz appeared, the rest waived their right to appear in court.

While those who have been seeking answers in the disappearance and murders expected this to be the beginning of finding out what happened that day in May of 2017, they will have to wait until October, as the hearing was continued.

“Unfortunately there was some discovery that was outstanding available for all the parties to pick up,” says Bosky Kathuria, Adilene Castaneda’s attorney adding that the hearing had to be continued because important evidence defense attorneys need to review just came in, “particularly cell phone data and DNA because DNA is essential to show basically the cooperation that needs to be established to prove out the case and cell phone data is critical in showing call, logs, location and important facts that would need to be established to prove out a case like this.”

Kathuria says it’s important to distinguish this preliminary hearing from a trial where a jury finds a defendant is guilty or innocent, “It’s the first evidentiary hearing so it’s the first opportunity in a criminal case to actually hear evidence, hear testimony and the purpose is basically to establish if there’s enough evidence to even go forward with the case.”

Kathuria expects this typical one or two day process to last a week because of the number of defendants, “It’s tough enough to handle one of these cases of this type of magnitude and when you have six co defendants everything takes six times as long.”

After all witnesses are called and all evidence is presented a judge will decide if there’s probable cause to proceed with a trial or dismiss charges.

Kathuria says he’s confident charges against his client will be dismissed, “I believe in her innocence I believe she’s actually caught at the wrong place at the wrong time and I’m going to do everything in my power to help her overcome this.”

We reached out to Jonathan and Audrey’s families, they did not want to be interviewed.

Kathuria says he knows they’re in pain, “My heart, my thoughts my prayers go out to the families, they’ve lost a loved one they are in a lot of pain and they’re grieving and it’s an unfortunate situation because nothing is going to ever bring those people back but in many ways Adilene is also a victim.”

All six defendants will remain in custody, all must appear at the next hearing scheduled October 18, 2021.