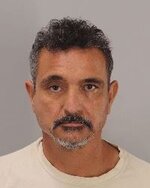 Murder and other felony charges were filed Friday against a 52-year-old man accused of killing a Coachella resident.

Gabriel Castro Ramirez of Coachella was arrested Wednesday on suspicion of killing 46-year-old Jimmy Meza the day before.

Along with the murder count, Ramirez is charged with one count each of attempted murder and assault with a deadly weapon causing great bodily injury, along with three counts of child endangerment.

Additional details regarding the attempted murder and child endangerment charges were unclear.

Ramirez, who remains in custody without bail, was scheduled to make his initial court appearance Friday afternoon at the Larson Justice Center.

Deputies responded at 8:43 p.m. Tuesday to the area of Fifth Street and Vine Avenue to an assault with a deadly weapon call, according to the Riverside County Sheriff’s Department.

Ramirez was arrested at the scene with a machete in his hand, according to officials, who did not specify whether the machete was the suspected murder weapon.

The motive for the killing was not provided.

Ramirez has felony convictions including carrying a concealed knife and assault with a deadly weapon causing great bodily injury.