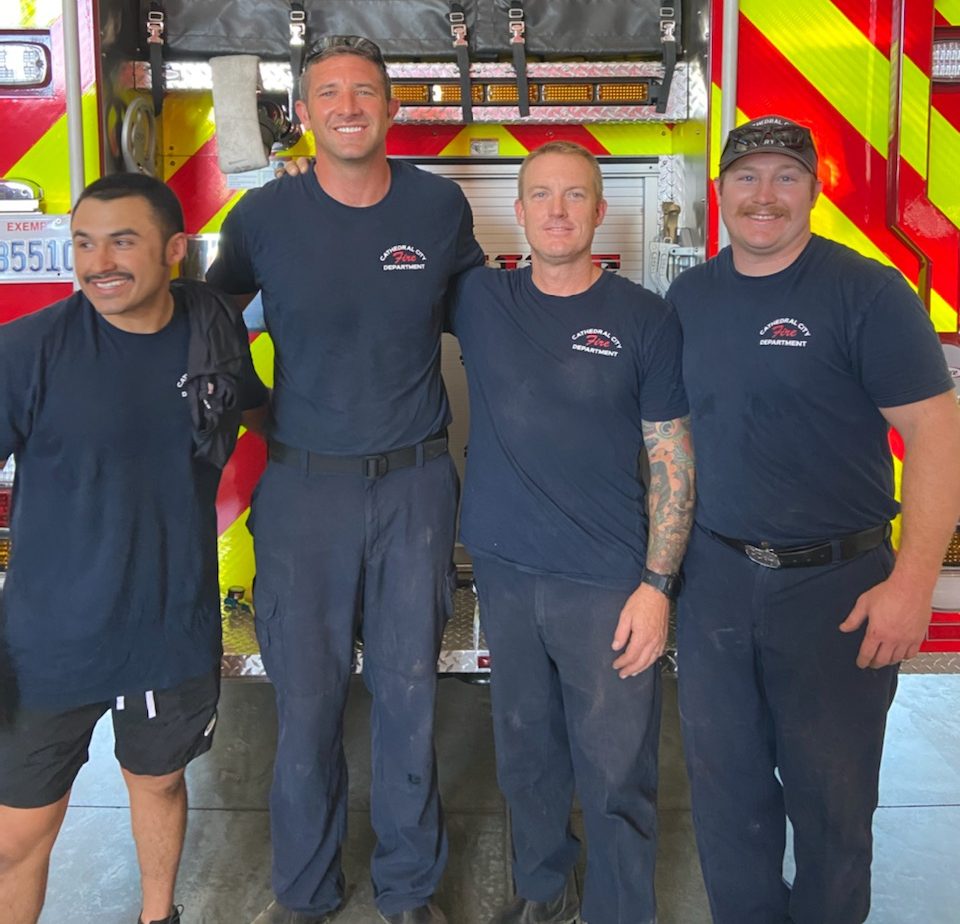 The Dixie Fire is the largest fire burning in California and now the second largest fire in the state’s history. It’s ravaged nearly half a million acres, destroyed hundreds of homes and communities in the northern part of the state.

Nearly 6,000 firefighters are battling the fire among them Cathedral City Fire Department’s bravest. One crew just returned from an 18 day deployment. Captain Craig Sanborn who is a 20-year veteran of the fire service says the fire behavior is among the most extreme he’s experienced.

“It really is shocking … we were driving along a dirt road and the fire was to our left and it was burning through the trees and through the brush at the same speed we were driving,” adding the fire gets out of control quickly because drought, terrain and weather created by the fire, including winds and lightning.

“Everything was just ripe to burn unfortunately so we knew that it was going to burn hot and it was going to burn fast … and that was the problem is no matter how much water we applied, dozer lines that were cut, the air tankers dropping water the fire was spotting with embers a mile to a mile and a half ahead so when you’re fighting the head of the fire and you get smaller fires constantly breaking out a mile ahead of you, I don’t want to say it’s a loosing battle but it just makes it very challenging to get ahead of this fire so that’s why it kept growing day after day, we’d redeploy, get in front of it, it would burn up to us it would burn past us and then we’d redeploy it’s just day after day chasing this thing down because it’s so big,” says Sanborn.

Sanborn says it seems everything is working against fire crews, not just the terrain and giant walls of flames but the smoke too, “I went nine days without seeing blue sky or sunlight … the smoke was so socked in above that area that they couldn’t fly all the planes.”

Sanborn says the strike team often had to stop fighting to take cover from lightning strikes inside the cabin of their fire truck and did have a close call, “Our tools got burned up some of our fire hose got burned up we literally had to drop everything we were were doing and abandon and get out of that area because the fire was just we were surrounded … they came up with a new plan safer and then we went back in and went back to work.”

Even with the odds stacked against them, Sanborn says the strike team of 21 he was working with had some meaningful victories, “That fire burned hot and fast and completely surrounded it and we were able to save the mill which was a huge bonus for the community I could only imagine if that thing had burned down, the devastation it would have caused for unknown number of jobs and all the people who live in the small town of Chester.”

His thoughts are with the communities who lost everything and the firefighters facing an uphill battle, “There is so much open forest that this can burn into … they don’t even have an end in sight.”

Cal OES, the state’s emergency operations center tells NBC Palm Springs the are coordinating more than 10,000 firefighters and fire personnel who are fighting nine large fires across the state, of which the largest is the Dixie Fire.