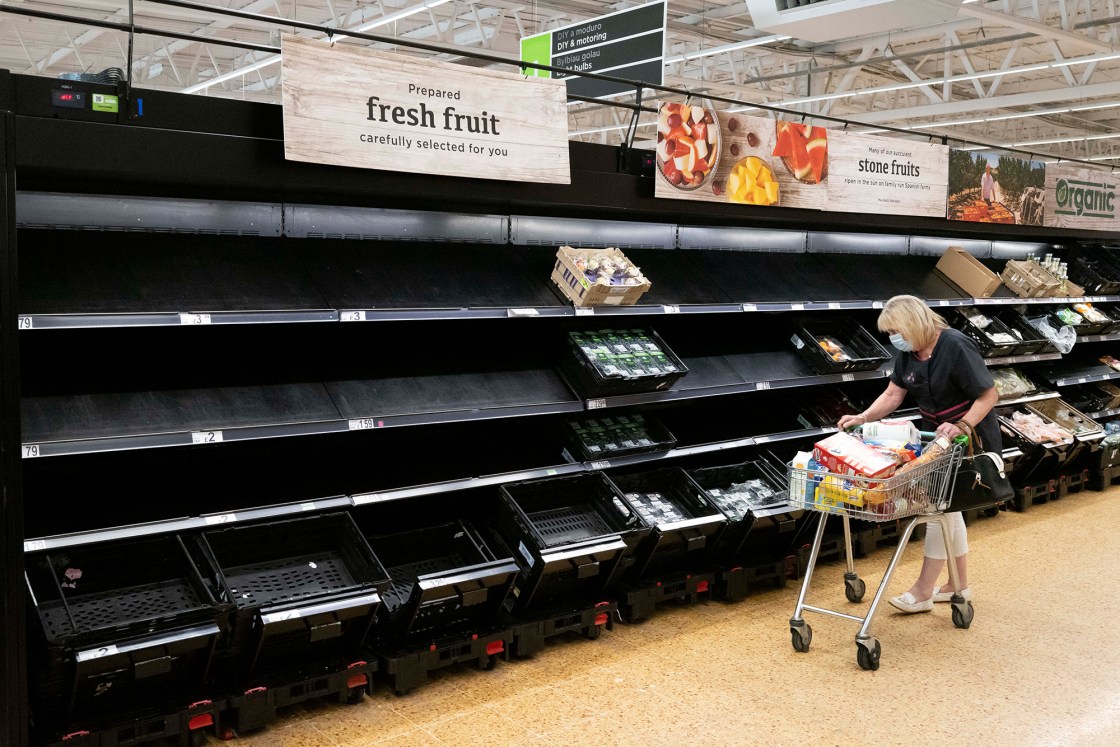 (CNN) — UK food producers and supermarkets are warning that empty shelves could persist through the year-end holiday season unless the government acts to ease a shortage of workers and truck drivers caused by Brexit and the coronavirus pandemic.

McDonald’s has already been forced to take milkshakes off its menu in the United Kingdom and Nando’s has closed 45 restaurants because it was running out of its signature dish peri peri chicken. But suppliers are warning of further disruption that means Brits may have to go without holiday staples such as turkey and pigs in blankets when they celebrate the first Christmas after Brexit took full effect.

National chicken production has already been cut back by 10%, according to the British Poultry Council, which says that 16% of industry jobs are not currently filled. Christmas turkey production will be slashed by a fifth, the industry group estimates.

“When you don’t have people, you have a problem — and this is something we are seeing across the whole supply chain. The labor crisis is a Brexit issue, and one that has been widely reported across the food and drink sector,” Richard Griffiths, chief executive of the British Poultry Council, said in a statement.

Supermarkets are warning that shortages could worsen ahead of the crucial holiday shopping period. Richard Walker, the managing director of supermarket chain Iceland, told BBC Radio on Wednesday that stores are already running short of some products including bread and soft drinks. Meanwhile, the chain is struggling to build stock needed for the peak season.

“The shortages consumers are seeing from the likes of Nando’s and McDonald’s in recent days and weeks highlight the immense impact this [truck driver shortage] is having on businesses,” Walker said in a statement. “The real worry is that time is quickly running out as we approach the extremely busy Christmas period, during which a strong supply chain is vital for everyone.”

Other grocery chains are in a similar position. Supermarket giant Tesco said Thursday that it’s suffering from pockets of low availability across a number of products, while rival Co-op said it was recruiting up to 3,000 temporary workers to help keep its shelves stocked.

“The shortages are at a worse level than at any time I have seen,” Co-op CEO Steve Murrells told UK newspaper The Times.

Industry groups have blamed worker shortages on a tight labor market and an exodus of EU nationals from truck driving, farming and food processing jobs. The Road Haulage Association says the United Kingdom is short around 100,000 truck drivers, 20,000 of whom are EU nationals that left the country after Brexit.

Global supply chains are under enormous pressure from coronavirus fallout. And in recent months, staff shortages in Britain were exacerbated by rules that required people to isolate if they came into contact with someone who had been infected with the coronavirus. Those rules have since been scrapped but the problem isn’t going away.

Meatpacking plants are suffering from staff shortages of roughly 14%, according to the British Meat Processors Association. Nick Allen, the group’s CEO, told the BBC last week that the industry has “lost more and more labor back to Europe” following Brexit, and it’s now running six weeks behind on producing pigs in blankets — or sausages wrapped in bacon — for Christmas meals.

Employers have been unable to hire replacement workers from the European Union because of tighter immigration rules brought in by the UK government following Brexit. Instead, some companies including Tesco are offering signing bonuses of £1,000 ($1,375) to drivers.

But that may not attract enough workers in a labor market with a record 1 million job openings and an unemployment rate under 5%. Walker, from the supermarket Iceland, said the government has made the truck driver shortage worse by leaving the profession off a “skilled worker” list that would allow for more immigration.

“This is caused by the government’s failure to appreciate the importance of [truck] drivers and the work they do for us. But even if they were immediately added, it would take four to six weeks because they need to get a right to work [document] and have a PCR [coronavirus] test, a place to live — they need to be recruited. So it’s not a light switch that will happen overnight,” he told BBC Radio.

Helen Dickinson, chief executive of the British Retail Consortium, has called on the government to rapidly increase the number of driving tests taking place for truck drivers, provide temporary visas to EU workers and change how driver training is funded.

Griffiths, from the British Poultry Council, said the government should also extend a program for seasonal agricultural workers to the meat sector.

“Our asks are clear and they provide government a way out of this problem. If that means relaxing immigration rules or accepting regulatory alignment with the EU, then these are the steps that must be taken to put British food on the road to recovery,” he said.

The UK government has announced some measures to increase the number of driving tests for truck drivers. But a spokesperson for the government said that “most of the solutions” will be driven by industry.

“We want to see employers make long term investments in the UK domestic workforce instead of relying on labor from abroad and our Plan for Jobs is helping people across the country retrain, build new skills and get back into work,” the spokesperson added.