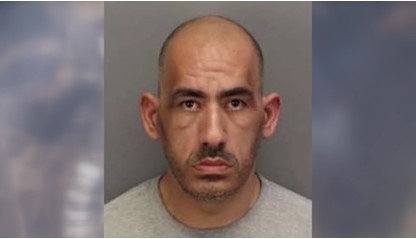 A dump truck driver accused of causing a deadly1,000- acre blaze in Calimesa by intentionally dropping flaming debris from his rig in the middle of a windstorm made his initial court appearance Tuesday.

Antonio Ornelas Velazquez, 38, of Desert Hot Springs was charged earlier this year with two counts of involuntary manslaughter and one count of burning an inhabited structure for the Oct. 10, 2019, blaze.

The defendant appeared before Riverside County Superior Court Judge Timothy Hollenhorst, who scheduled his arraignment for Oct. 21 at the Banning Justice Center.

Velazquez, who has no documented prior felony convictions in Riverside County, is free on a $75,000 bond.

The defendant was arrested in February following a 14-month investigation by Cal Fire peace officers and Riverside County sheriff’s detectives.

“The Sandalwood Fire was caused by a burning load of trash that was dumped next to dry vegetation by the trash truck that Velazquez was operating,” according to a Cal Fire statement released at the time.

According to prosecutors, the defendant noticed smoke rising from the scoop of the CR&R truck he was operating on Sandalwood Drive, near Seventh Street, about 2 p.m.

Against the advice of a motorist and another truck driver who pulled up behind him and warned of the dangers of allowing burning material into the open amid high winds, Velazquez “dumped the burning load onto the ground” directly adjacent to brush along the roadway, according to the District Attorney’s Office.

Hannah Labelle, 61, and Lois Arvikson, 89, were killed as the flames swept over their properties, leaving them no time to escape.

Seventy-two structures were completely destroyed, and another 16 were damaged, according to investigators. The blaze charred a total of 1,011 acres before it was stopped just inside San Bernardino County four days later.

Lawsuits were filed against CR&R weeks afterward and are pendi