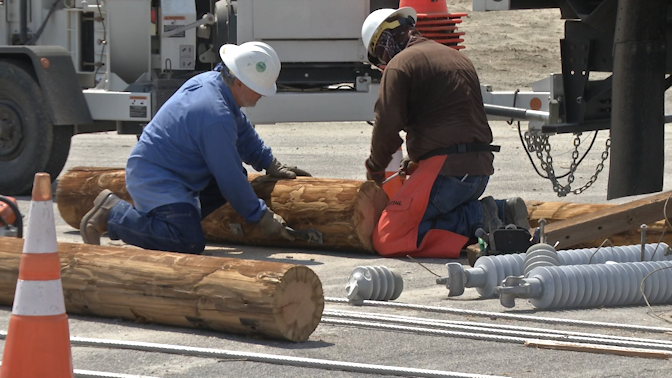 No electricity. No Internet. And no air conditioning.

Six hundred and sixty customers in North Shore are still without power in the middle of summer following severe thunderstorms.

Thirty-seven Imperial Irrigation District utility poles went down, and with them, power lines causing damage to not only IID infrastructure, but also to access roads and nearby homes. One North Shore resident told us his roof was severely damaged.

IID said the outage in the area was caused by heavy winds, knocking over a number of poles, all which were in good condition.

“This is an event we have no control over, mother nature does these things,” said Antonio Ortega, Imperial Irrigation District Spokesperson.

“Although we are doing everything we can to get those customers back online as soon as we can and as soon as possible, our estimated restoration time continues to be the same as what we announced yesterday morning which was within 4 days,” said Ortega.

Some residents worry that the restoration will take longer.

“It might be more, I don’t know because I haven’t seen anything getting ready,” said Silva.

Utility officials are still working to get the power up and running. The Salvation Army stepped in, alongside IDD and Riverside County, to provide resources to those affected including ice, water, and food.

“We are providing information to those affected customers for either shelter or a hotel voucher for anybody who needs accommodation for lodging everyday between yesterday and until the repairs are made,” said Ortega.

Free lunches were given away to North Shore residents, and within an hour, more than a hundred people came to pick up food for their families.

“Definitely 100… definitely 100 plus,” said Hilda Parks, Captain of The Salvation Army. “We give away almost all the lunches already. Everybody is in need.”

IDD said restoring power to North Shore is their top priority, and they are working as best, and as quickly as they can.

“Know that we have boots on the ground, and we have other work crews coming in from out of the area,” said Ortega. “We’re working 24/7 everyday as hard as we can to make sure that we restore power to our community as soon as possible.”