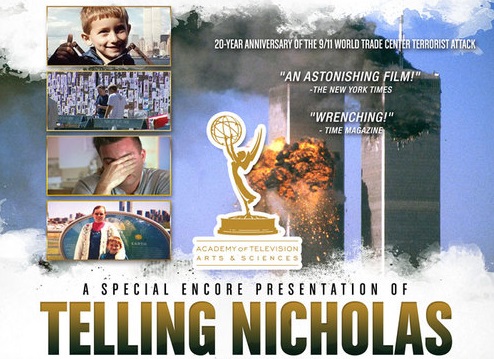 Local filmmaker James Ronald Whitney saw 9/11 unfold right before his very eyes. Armed with a camera, he documented the biggest and most horrific tragedy we have ever faced. But Whitney did not just capture incredible footage, he also created one of the most quintessential movies about 9/11 — “Telling Nicholas.”

The film is a brilliant, heartfelt, and hopeful account of 7-year old Nicholas Lanza’s life after his mother was killed in the Twin Towers. The film begs the question — how do you tell a child that his mom just died?

Another boy whose parent died in the 9/11 attacks is Thanbir Ahmed, a Muslim teenager whose father, a waiter at Windows on the World, also passed away that day.

54 days after the 9/11 attacks, “Telling Nicholas” premiered to critical acclaim. The documentary won an Emmy, was inducted into The Museum of Television and Radio, and was selected by The Academy of Motion Pictures Arts and Sciences as “One of the most outstanding movies of 2002!” It was also included in the Academy’s prestigious documentary series.

Twenty years after the attacks, the film is set for a red carpet encore presentation at the Mary Pickford Theater in Cathedral City.  Benefitting Variety the Chldren’s Charity, the event is co-sponsored by the City of Palm Springs and the Greater Palm Springs Realtors (of which Whitney is the current president) and will be held on Saturday, Sept. 11th at 6:30 p.m.  Click here to purchase tickets.