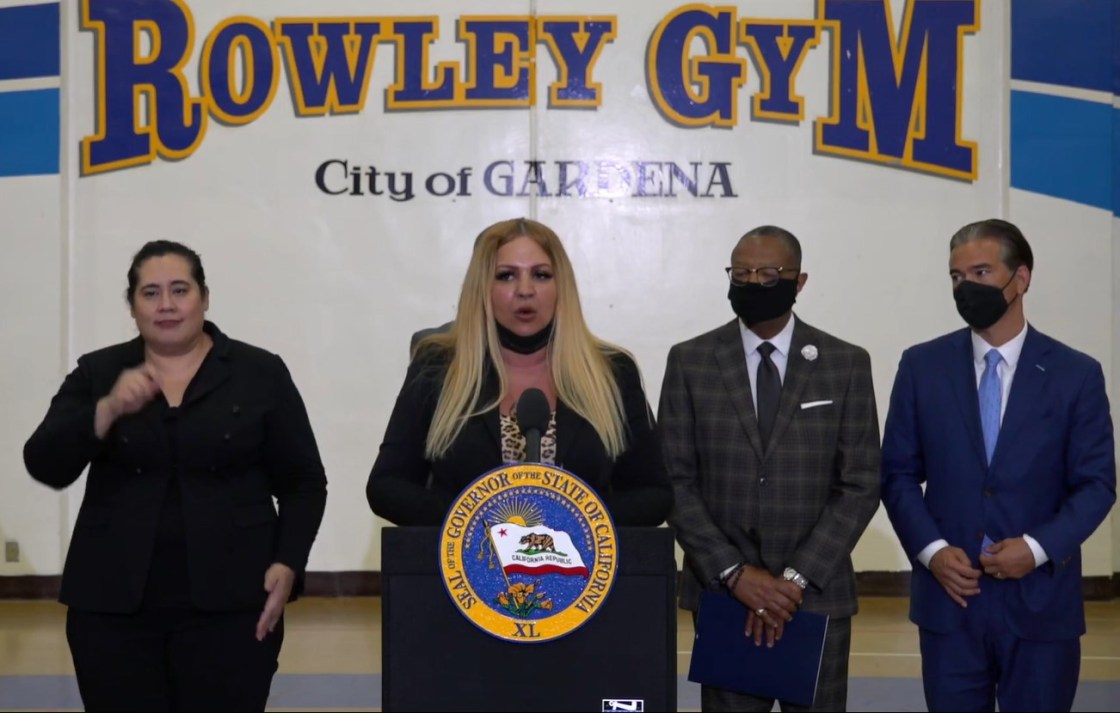 (CNS) – During an appearance at Rowley Gym in Gardena, Gov. Gavin Newsom Thursday signed a package of bills into law aimed at cracking down on misconduct by law enforcement officers while also setting standards and restrictions on certain uses of force.

Most notably among the new laws was Senate Bill 2, which creates a process for decertifying law enforcement officers who are found to have engaged in misconduct — preventing culpable officers from simply moving to a different law enforcement agency.

Newsom said the measure was a long time coming, noting that 46 other states have similar laws on the books.

“I’m here as a governor mindful that we are in the juxtaposition of being a leader on police reform, and a laggard on police reform,” Newsom said. “We have a lot to be proud of, but there’s areas we have nothing to brag about.”

Speaking in front of an audience that included relatives of people who have been killed during interactions with law enforcement, Newsom assured the families that the deaths will “have an impact in a way that does justice to the cause that unites us, which fundamentally is to build trust, develop a stronger relationship, to do more and do better, to be better in terms of how we approach each other each and every day.”

SB2 was strongly opposed by some law enforcement groups. After Newsom signed the measure, the Los Angeles Police Protective League — the union representing Los Angeles Police Department officers — and the San Francisco and San Jose Police Officers Associations issued a joint statement saying the original version of the legislation would have allowed the decertification of officers for issues such as “traffic tickets, unfounded complaints and unsubstantiated allegations.”

As passed, the law sets up an advisory commission that will review misconduct cases and make a recommendation to the state Commission on Peace Officer Standards and Training, which could then suspend or revoke an officer’s certification.

“The biased panel established in his bill has zero authority to decertify an officer,” according to the law enforcement unions. “They can recommend it to the POST commission, but they can’t do it. The POST commission must vote by a two-thirds margin to decertify a peace officer after a hearing that accords officers their due process rights.”

The unions urged the Legislature to now “focus on reducing the rise in shootings, homicides, and robberies each of our cities are grappling with.”

The leader of the Peace Officers Research Association of California, however, spoke out in support of the law.

“We cannot allow officers who demonstrate gross misconduct to continue to be members of the law enforcement profession. Their licenses must be revoked,” PORAC President Brian Marvel said in a statement.

Among the other bills signed by Newsom was Assembly Bill 48, authored by Assemblywoman Lorena Gonzalez, D-San Diego. The bill sets training and use standards for crowd-control measures such as rubber bullets and tear gas.

“AB 48 finally creates basic standards to help minimize the excessive, unwarranted use of these dangerous weapons,” Gonzalez said in a statement. “This law will protect Californians’ right to safely protest without risking permanent or life-threatening injuries.”