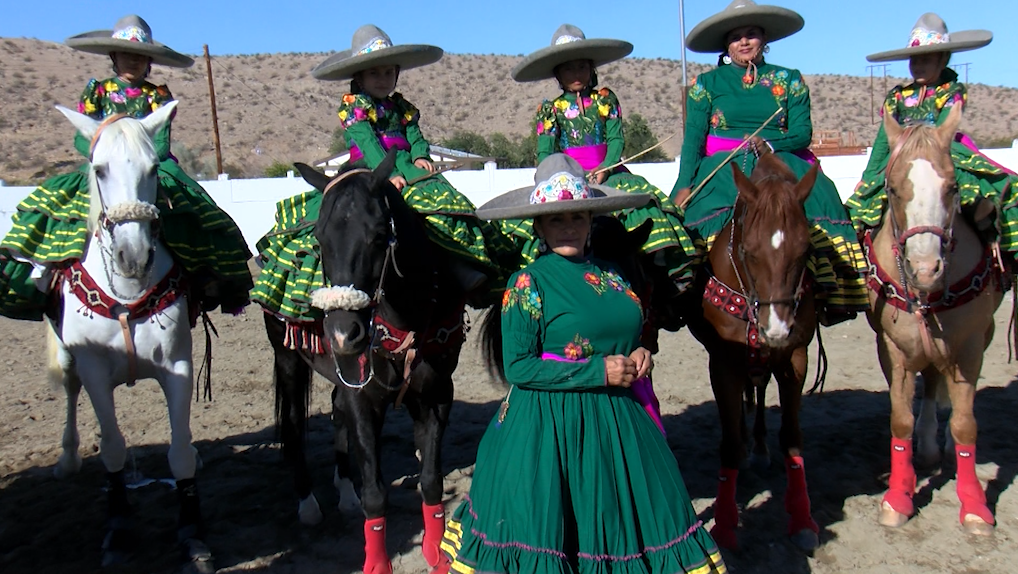 Rodeos, bull riders and barrel races are all sports that originated during the 19th Century to honor the open-range cattle industry in Northern America, now that legacy lives on through the traditional all-female Mexican rodeo.

A group of young Mexican American girls who go to school in the Coachella Valley, speak both languages and sometimes even help their families in the fields have started a new activity. Three months-ago, these seven to fifteen-year-olds began to spend their free-time at a backyard stable learning how to take the reins and gallop sidesaddle .

“I like horses and I like how escaramuza looks,” said Miranda Lopez, a 7-year-old escaramuza who has been practicing every Saturday.

“Escaramuza”, meaning an all female mexican equestrian team, is a first for the eastern coachella valley. According to the Mexican Rodeo Association there are less than 30 all female teams in California.

Toni Gallegos, the owner of Escaramuza Charra la Potosina, says the team was born out of the uncertainty of the pandemic. She says the practices are more than just a distraction from the hard times, they are also a learning experience connecting the riders to their Mexican roots and traditions.

Sandra Gallegos who is one of Toni’s daughters and also helps out as an instructor said, “Especially for the girls, it shows them a lot about their culture, where they come from, and our history as mexicans. and on the sports side it teaches them responsibility.”

Rodeos tend to be male dominated, so the escaramuzas are a distinct sport that revolves around femininity.An important factor that has sparked interest in Coachella female American riders.

“It’s been an absolutely wonderful experience to learn how to do the sidesaddle and all of the customs and all of the wonderful commerotary with these people and it’s making me a better rider,” said Jenny dales, who is also an instructor.

With a coachella valley team, families are reminiscing with their kids as they see them practice a sport their grandparents performed in their country.

Humberto Haro,whose daughter is part of the team and owns his own ranch in the desert said, “It’s not easy, especially for a kid.” while Lunamia, who is a 6-year-old escaramuza said, she “loves riding horses,”

With their long puffy green embroidered dresses and sombreros, these little girls hope to sidesaddle all the way to national competitions in january.The owner of the small ranch and saddle has made this possible with the help of her family and does not charge any young resident who wishes to join the team.