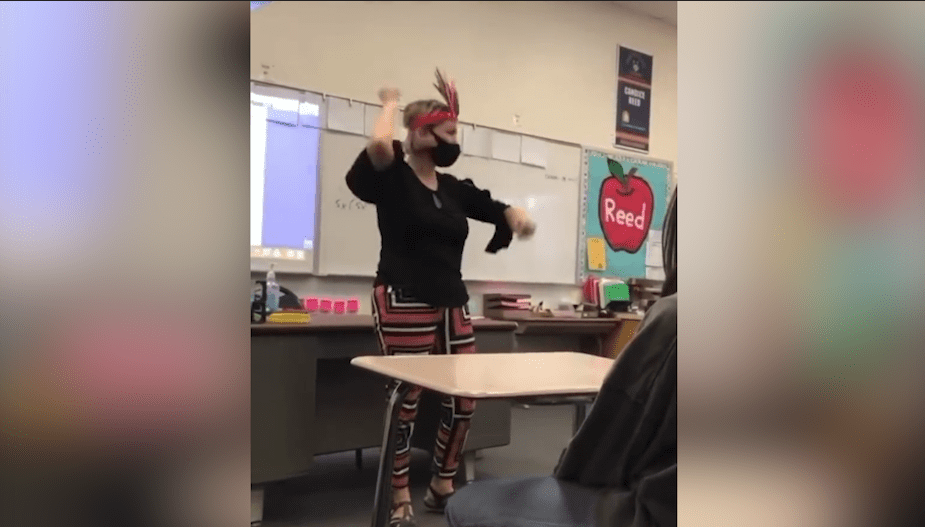 “Racism and unprofessionalism, this is why our education system is falling apart,” said Nick Tilsen, the CEO and President of Oglala Lakota Nation. Tilsen was reacting to a video that has been shared and seen millions of times on every social media platform.

National and international outlets have covered the story, while Native Americans are outraged after seeing this video too.

A math teacher from John Wright North High School in Riverside dressed with a fake feather headdress and “tomahawk chopping” and “whooping” across the classroom for several minutes.

According to students, Miss Candice Reed wanted to teach an interactive trigonometry lesson but it quickly went sideways.

The student who filmed the video is reportedly of Native American descent and he felt he had to record the video because he felt traumatized.

“You can teach American Indian history. The indigenous people’s history by not accurately culturally appropriating yourself into it,” said Tilsen.

It appears this behavior has gone on for years, an image from a yearbook reportedly from 2010 appears to show Miss Reed with a similar feather headdress.

Native American leaders say this is the latest failure of our education system to tackle and forbid racist behaviors among teachers.

“The way we reclaim our power as indigenous people is through education and the decolonization of education. It was used to assimilate people to brainwash our people. Force us to cut our hair,” said Tilsen.

California is seen as a progressive and tolerant state and Riverside County itself is surrounded by acres of tribal land. However, local tribal members say that doesn’t make it immune from racism.

“There’s little to no difference as to what happens in Palm Springs High. The mascot is the ‘Indians’ and that is the exact same thing. Yes this lesson might be taught but when you have teams running out saying we’re Indians,” said Tribal member for the Agua Caliente Band of Cahuilla, Isabella Dodd.

Riverside Unified School District quickly released a statement saying these behaviors are completely unacceptable. They also add that they value diversity, equity, and inclusion. The district has now placed the administrator on leave, something many are saying it’s not enough.

Tribal members also want an apology and security for the student who released the video after feeling attacked.

State lawmakers representing the district issued a collective statement condemning the teacher. They are calling her actions damaging and insensitive thus acknowledging it’s not an isolated incident.

In addition, the California Indian Nations College in Palm Desert will also be releasing a statement to the school district demanding racist actions like these legally become a zero tolerance behavior.