Kyle Rittenhouse Found Not Guilty On All Charges 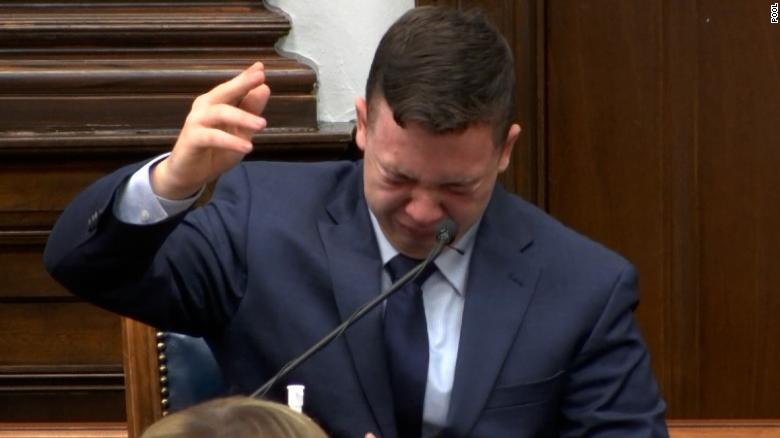 (CNN) — Kyle Rittenhouse, the teenager who killed two people and shot another during unrest in Kenosha, Wisconsin, was acquitted Friday of first-degree intentional homicide and four other felony charges.

Rittenhouse, wearing a dark jacket with a burgundy tie and shirt, stood behind the defense table as each not guilty verdict was read. He tried to hold back tears, then sobbed and appeared to collapse forward on the table, where one of his lawyers embraced him.

Rittenhouse’s mother gasped after the final verdict was read, her head falling into her hands.

The panel of five men and seven women deliberated more than 25 hours over the past four days in a closely watched case that polarized an already divided nation. The verdict cannot be appealed.

Jurors had asked the court a handful of questions, including requests Wednesday to rewatch much of the video evidence of the shootings. In the end, the panel agreed with the defendant’s testimony that he feared for his life and acted in self-defense.

Since the shootings on August 25, 2020, the case pitted Americans who saw Rittenhouse as an armed teen vigilante against those who viewed him as a citizen taking up arms to protect businesses from looters and rioters.

The judge praised the jury, saying he “couldn’t have asked for a better jury.”

Some jurors appeared fatigued in the jury box as the verdicts were read — their hands on their chins or rubbing their eyes, according to a pool reporter. Others appeared ill-at-ease,their arms across their chests.

After the verdict was announced, lead prosecutor Thomas Binger told the court, “The jury has represented our community in this trial and has spoken.”

The family of one of the victims, Anthony Huber, said in a statement “there is no accountability for the person who murdered our son.”

“It sends the unacceptable message that armed civilians can show up in any town, incite violence, and then use the danger they have created to justify shooting people in the street,” the statement said of the verdict.

“We hope that decent people will join us in forcefully rejecting that message and demanding more of our laws, our officials, and our justice system.”

On a cold, sunny afternoon, crowds gathered outside the courthouse after the verdict.

“We want the nation to know the nation that you live in now isn’t the … United States that we used to live in,” said Justin Blake, uncle of Jacob Blake, whose shooting by police last summer sparked the protests where Rittenhouse showed up with his gun.

The prosecution faced an uphill challenge in the case because Wisconsin law requires the state to prove beyond a reasonable doubt that Rittenhouse did not act in self-defense. But there are limits to a self-defense claim.

One of the videos the jury asked to rewatch — a drone video showing Rittenhouse shooting Joseph Rosenbaum — was at the heart of a defense request for a mistrial in the case.

The deliberations come after a two-week trial highlighted by emotional and compelling testimony from Rittenhouse, the 18-year-old at the center of debates around self-defense, gun ownership and Black Lives Matter demonstrations. On the stand, he told jurors — and the viewing public — that he acted in self-defense.

“I didn’t do anything wrong. I defended myself,” he testified.

The charges stem from the chaotic unrest last year in the wake of the Kenosha police shooting of Jacob Blake, a 29-year-old Black man. After instances of rioting and fiery destruction, Rittenhouse, 17 at the time, took a medical kit and an AR-15-style rifle and joined up with a group of other armed people in Kenosha on August 25.

There, Rittenhouse fatally shot Rosenbaum — who was chasing the teenager and threw a bag at him — and then tried to flee. A crowd of people pursued the teenager, and Rittenhouse shot at an unidentified man who kicked him; fatally shot Huber, who had hit him with a skateboard; and wounded Gaige Grosskreutz, who was armed with a pistol.

What happened in the trial

Prosecutors called 22 witnesses over the course of six days as they sought to show Rittenhouse acted recklessly that night and provoked Rosenbaum by pointing the rifle at him, setting off the ensuing series of events.

The prosecution portrayed the three other people who confronted the teen as “heroes” trying to stop what they believed to be an active shooting. Binger also questioned the teenager’s decision to take a gun into the city in the first place, calling him a “chaos tourist.”

However, on the stand, Rittenhouse testified he acted in self-defense when he shot four times at Rosenbaum, who he said had threatened him earlier, chased him, thrown a bag at him and lunged for his gun. Rittenhouse also referred to the three other people he shot at as part of a “mob” chasing him.

He became emotional and broke down into tears during his testimony as he began to recount the initial shooting, leading to a break in the case.

“Every person who was shot was attacking Kyle. One with a skateboard, one with his hands, and one with his feet, one with a gun,” Richards said. “Hands and feet can cause great bodily harm.”

The trial featured more than a dozen videos from the night that showed what happened before, during and after the shootings. Most of the facts of what happened that night were not up for debate — rather, at the heart of the trial was the analysis of Rittenhouse’s actions and whether they can be considered “reasonable.”