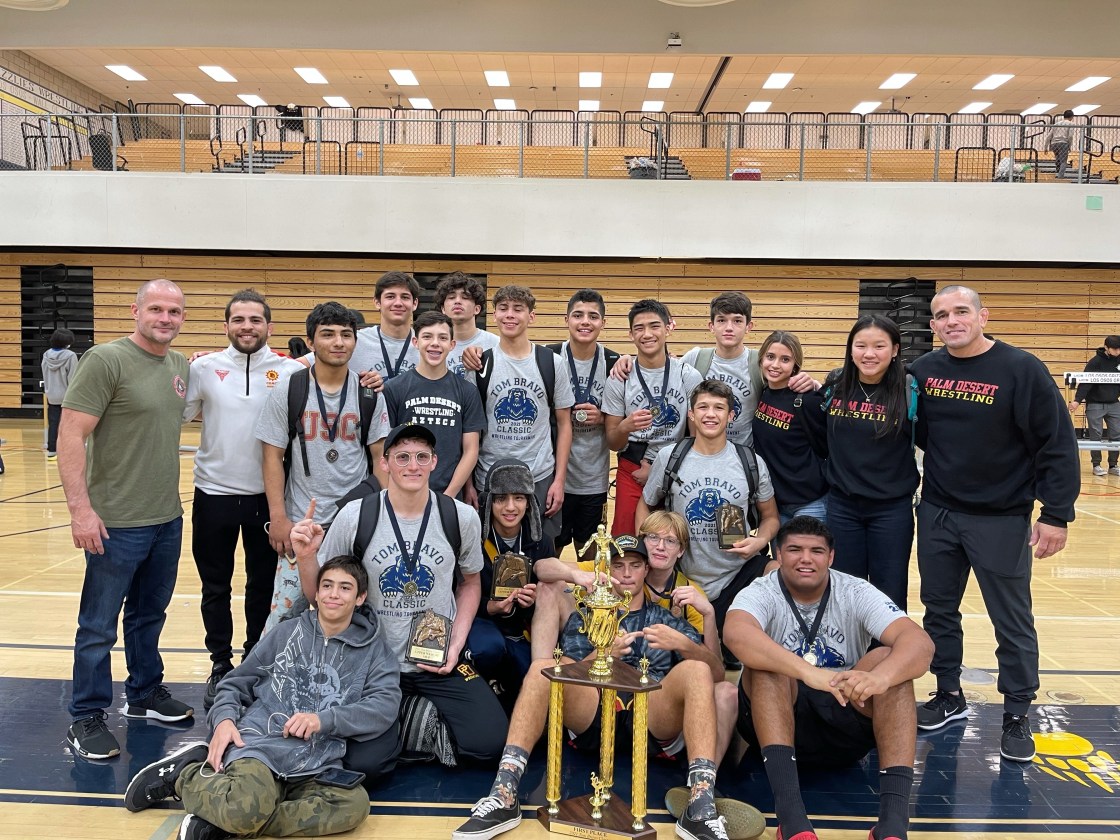 Palm Desert high school’s wrestling team has emerged yet again this season as one of the best programs in California.

Even though wrestling is an individual sport, head coach Anthony Mantanona says that it takes the whole team to achieve success.

“Even if it’s an individual sport, you need help you need training partners you need people to sharpen you. We have just been lucky to keep this group together. You know, through the offseason and stuff. Everybody just stays around and keeps practicing”

Tom Bravo Classic Champions! We had 11 finalists and 10 Champions! 4 placers and 3 MVP’s! pic.twitter.com/Sfg0u49bbL

Beau Mantanona, who is currently ranked 2nd (138 lbs.) in the state, explains how wrestling with the same group since he was a kid has helped him achieve success.

“We are a really tight group, we’ve grown up through the same club and we just practice with each other every day since elementary school. They know what I do, so I gotta keep doing different things to say doing good.”

“Just friendly competition helps you get better,” says female wrestler Tegan Nguyen, “it pushes you to do a little more and to work a little harder. Working together helps everyone improve especially when it’s you’re not as good and you’re working with someone better than you. You learn from them.”

Dedication to each other is paying off for the Aztecs, right now they’re wrestling program is ranked fourth in the state of California with most of the wrestlers ranked top five in their respective week classes, according to Michael Cho of The California Wrestler Newsletter.

Palm Desert’s wrestling recognition goes beyond the state, even as far as representing the country. Recently, Beau Mantanona competed for Team USA at the Cadet World Championships in Hungary.

“Great experience, you know, I didn’t get the results I hoped for but I learned a lot. I think I got better.”

Coach Mantanona says that the Aztecs’ recipe for success is simple; put in the work not only for yourself but for your teammates.

“Just working hard, trying to score a lot of points being aggressive and offensive. Sometimes it’s intense when we need to push hard and the guys are feeling good. Well, push a little bit harder.”

“I just trust in my training.” Beau says, “I know I work hard so I’m not gonna lose to someone because I don’t work as hard. No pressure, just having fun.”

As Nguyen says, the best part about wrestling is the satisfaction of a hard day’s work on the mat.

“I mean, the payoff is nice like I feel good about myself and I feel confident.”