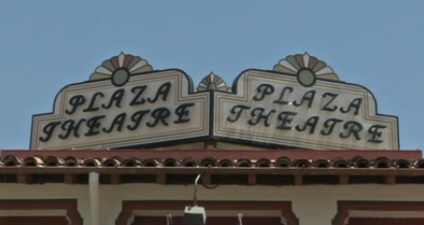 Jan. 28, 2022 – After recently receiving a $5 million donation from well known television producer and local resident David C. Lee, the City of Palm Springs is now reaffirming its commitment to restoring the historic Plaza Theatre as a community asset.

On Thursday night, the City Council approved an agreement with the Palm Springs Plaza Theatre Foundation, created by Chairman and former Councilmember J.R. Roberts, that will support a fundraising effort with funds and staff support to maintain not only the theatre itself, but the ongoing fundraising efforts.

The Plaza Theatre is one of the city’s most iconic structures. Built in 1936, the theatre has been the location for film premieres, national radio broadcasts, the Palm Springs International Film Festival, and the Fabulous Palm Springs Follies, bringing national attention to Palm Springs. Despite its use, over the last few decades, the building fell into disrepair. In 2019, the City of Palm Springs, led by Roberts, launched a campaign to restore the grand dame Plaza Theatre to its former glory.

The restoration plan calls for significant infrastructure repairs, installation of new theatrical equipment, and other improvements to ensure the building meets current fire prevention and American Disabilities Act mandates. With the most recent donation from Mr. Lee, the Foundation is halfway to its goal of $10 million dollars. $2 million of the donation is matching funds.

“The historic Plaza Theatre is an iconic building in Palm Springs and a true architectural treasure,” said Roberts. “The Foundation is counting on those who love Palm Springs and this jewel of a theatre to step up and help us restore it to its former glory.”

All funds received now will be matched up to $2 million dollars by Mr. Lee. Visit SaveThePlazaTheatrePS.Com for more information or contact J.R. Roberts directly for naming opportunities via email at JR66@mac.com.