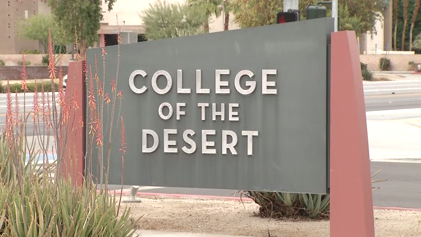 “We remain committed to having an opportunity for the city council to meet with Dr. Garcia and chairman Perez and all of the leadership at the College of the Desert,” Mayor Lisa Middleton said.

That’s what became very clear in Thursday night’s Palm Springs City Council meeting after the council pulled the college’s presentation from the agenda.

City Manager Justin Clifton explained how council got to that point, detailing how city and college staff have been meeting every other month to discuss the projects since November.

After both parties scheduled the presentation on January 24th for Thursday night’s meeting, Clifton said he told the college that their presentation would be scheduled for 6:30 p.m. but could be later than anticipated since other agenda items might take longer.

Superintendent Dr. Martha Garcia replied saying she had a previous commitment at 7:15 p.m. but her staff could sit in their place.

Clifton said they attempted to rearrange the agenda but ended up not being able to work out an appropriate time.

“We did explore options of rearranging the agenda quite aggressively to get to this item,” Clifton explained. “We know that there were numerous members of the public, residents and business stakeholders that hoped to participate. We did exhaust those efforts but were unsuccessful and we didn’t see a way that we could have a complete conversation given the constraints.”

The council explained they wanted all members of the team there to have a thorough discussion of the matter.

Rubén AríAztlán Pérez, the Chair of the college’s Board of Trustees, addressed the situation during public comment saying he wanted city council to know that he and his board are committed to making this project happen.

“We want to work with you to get this project done,” he said. “I mean, who really wouldn’t want to make this happen? It’s such a great concept for students, for the region and will be a project we can all be proud of. I know that we will get it done together.”

Pérez said he was disappointed to hear that the city canceled his presentation, saying it was unnecessary since he planned to give the presentation himself.

He concluded, “I myself and the board are committed to making this project happen. You have my word.”