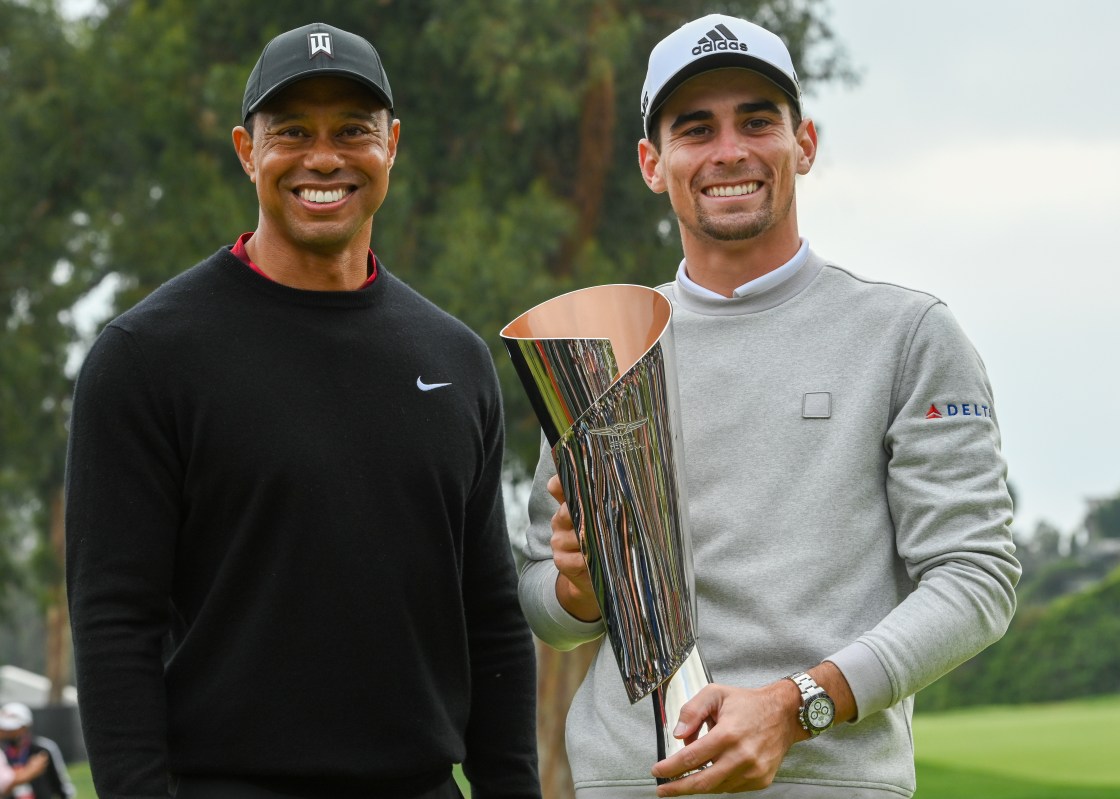 All eyes were on Chile’s Joaquin Neimann from day one. He’s not only the youngest winner in the 96-year history of the Genesis Invitational, but Neimann is the first to win the tournament in wire-to-wire fashion since Charlie Sifford in 1969. A difficult task to do. In fact, since 2011, only 3 players have wire-to-wire victories under their belts; Rory Mcilroy at the 2011 U.S. Open, Jordan Speith at the 2015 Masters.

And now, roughly seven years later, Niemann can now add himself to that short list. All players also 23-years-old or younger when they did so.

But, despite the windy conditions at Rivera, Niemann never faltered. He sat at the top of the leaderboard after coming out the gates — with back to back 63’s.

And to top it all off– the man handing him the trophy on 18, none other than one of the greatest golfers, and one of his idols.

Neimann says that was the icing on the cake.

“It was awesome having Tiger there. I haven’t seen him since probably a year. Everybody knew what happened here one year ago, which was pretty sad.  Being able to see him doing as well as he’s doing is awesome. It talks pretty well how good he is in any aspect of golf and life, said the new two-time Tour champion.  Neimann went on to say, “He’s awesome, he’s one of my idols. I always watched him on TV and I still do. Having Tiger on site receiving the trophy is something special.”

But the field was full of great golfers this weekend, who were all chasing him down, despite Niemann’s foot remaining on the gas into the weekend, which included a handful of Southern Californian locals would have to settle for a near the top finish.

Collin Morikawa had a strong finish by sinking some picture perfect chips on Sunday to get the crowd rowdy, something he said he truly missed.

After the round, Collin said, “It’s so nice. I miss it. I obviously I haven’t played on the PGA TOUR, I guess this is my first full-field event of the entire season. Feels nice to be back. It’s so good to hear the fans. I wish we had more events in L.A. because I definitely felt the energy from them.

Now to the rookie, that dazzled fans with his incredible length and ability to finish, Cameron Young. After firing a 62 on Friday, the 24-year-old still found himself two-back of Niemann.

Riviera known as a good gold course to those that can manage it. But it always comes down to certain decision making, something that Young highlighted.

He says, ” I think it’s kind of just — I think it’s in a lot of our blood to keep the pedal down a little bit. Came out today taking a couple conservative lines early not because I was trying to hang onto second, but just because I knew the longer I hung around, you just never know what happens. Yeah, I think it’s just something that a lot of us will do. I don’t think anyone would say no, I’m just trying to finish second. I was out there trying to win.”

The defending champion, Max Homa, finished in tied for 10th, in a field with the world’s top ten golfers, that can be highly respected, as there’s a lot left in the tank with a bright future ahead. Other Southern Californian favorites: San Diego State alum, Xander Schauffele (T-13), Pepperdine alum, Sahith Theegala (T-48) and the Murrieta native Rickie Fowler (T-55).