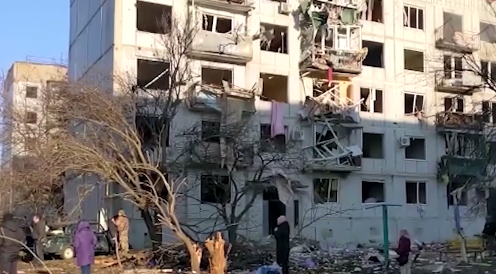 The effects of the Russian invasion are being felt within the valley.

In 2018, Iryna Pyle moved from her home in Eastern Ukraine to Palm Springs and has since become the owner of Haus of Pizza in Palm Desert.

On Thursday, she shared her story, saying how worried she is about her home country and how scared she is for her family in Ukraine.

But, this violence and destruction in her home isn’t new to her.

“Eight years ago, my hometown Lugansk, which is Eastern Ukraine, was taken over by Russians, Russian separatists, the Russians military guys, Russian everything. Trust me. There was blood, dead bodies on the floors. Think about it. Civilians. We don’t have a voice. We don’t want to be under Russian flags. You know what I mean?”

Pyle continued, “I remember calling my mom and asking how’s everything and she said, ‘We don’t have water. We didn’t have electricity. And there is steam and smoke everywhere. There’s a bomb. The schools are bombed and everything. It’s a war. It’s a real, real war. What’s in today’s news is nothing new to me. It has been eight years and that happened to my home city.”

Now, Pyle and her family are anxiously waiting for what is to come.

“Everybody hopes nothing will happen,” she said. “But it has happened to Ukrainian Crimea. It has happened to two large cities in eastern Ukraine. We don’t know what’s gonna happen tomorrow. Today, they started the full invasion.”

She continued, “The whole Ukraine has been shaped and hurt by the explosions of bombs. In one Ukrainian city, they already have a curfew. Nobody is allowed to go outside from 8 p.m. till 6 a.m. They are taking it really seriously. Right now, Ukraine has its own army but 10 years ago, we didn’t have our army.”

Pyle hopes Ukraine can stand strong against Russia, but worries that if they take over, it won’t be the end.

“I keep my fingers crossed that the Russians will not take over Ukraine. Because if they invade Ukraine, Putin will not stop.”

If you’d like to support Haus of Pizza, they have an Eastern European food week the first week of every month where you can enjoy all different kinds of Ukrainian dishes.