Peace In Europe Is “Shattered” As Russia Invades Ukraine 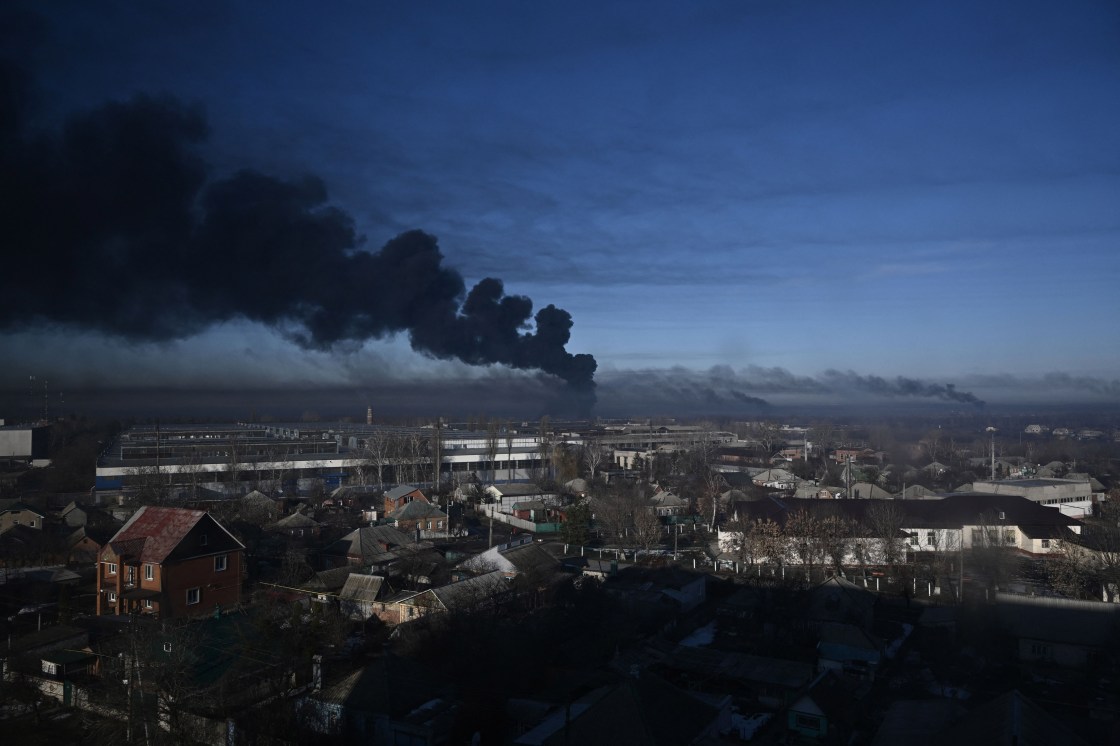 (CNN) — Russia has launched an unprecedented military assault on Ukraine by land, air and sea that has already left dozens dead, prompting Western leaders to condemn Moscow and vow unity with Kyiv.

Ukrainian ministers said the Kremlin had begun a “full-scale invasion” of their country, and the fighting appears to be some of the worst conventional warfare Europe has seen since World War II and the conflicts in the Balkans in the 1990s. Markets across the globe plunged.

Attacks and explosions have been reported throughout Ukraine, including in the capital, Kyiv, where air sirens rang out Thursday morning and afternoon. Russian forces appeared to be encircling the city and looked poised to invade, Ukraine’s deputy interior minister told CNN.

Officials in the country believe Russia’s plan is to overthrow the Ukrainian leadership and install a pro-Russian government.

Ukraine’s democratically elected government remains intact, but has declared state of emergency that will begin Friday.

In an emotional speech Thursday afternoon, President Volodymyr Zelensky called on world leaders for support, warning that if Ukraine doesn’t get help now, “war will come knocking at your door tomorrow.”

At least 57 people have died and 169 people have been injured — including both combat and non-combat injuries, Ukraine’s health minister said Thursday.

Western leaders were united in their swift and strong condemnation of Russia’s military action.

US President Joe Biden said Thursday that Russian President Vladimir Putin had “committed an assault on the very principles that uphold the global peace.”

“Now the entire world sees clearly what Putin and his Kremlin allies are really all about,” Biden said

Biden announced a raft of new sanctions to punish Moscow, some of which limit Russia’s ability to do business using important global currencies such as the dollar and the euro and target Russian banks that together hold around $1 trillion in assets.

“Putin chose this war. And now he and his country will bear the consequences,” said Biden.

“Peace on our continent has been shattered. We now have war in Europe, on the scale and of the type we thought belonged to history,” he said. “NATO allies condemn Russia’s invasion of Ukraine in the strongest possible terms. It is a blatant violation of international law, an act of aggression against a sovereign independent and peaceful country.”

NATO will increase land, sea and air forces on its eastern flank, the security alliance said in a statement.

Russians give their rationale for invasion

Putin had kept the international community on a knife’s edge for months, as the world watched and waited to see what exactly the Kremlin planned to do with the estimated 150,000 troops it deployed on Ukraine’s borders.

After repeatedly denying any plans to invade Ukraine, Putin said in a televised address early Thursday that Russia would be conducting a military operation in the Donbas region of eastern Ukraine, which contains Donetsk and Luhansk, the separatist-held regions that Moscow recognized as independent on Monday — in violation of international law.

Putin said earlier this week he was ordering troops to the breakaway enclaves to act as “peacekeepers.”

Kremlin spokesman Dmitry Peskov told foreign journalists that the “demilitarization and denazification” of Ukraine are among the objectives of Russia’s military action in the country.

“Ideally, Ukraine should be liberated, cleansed of Nazis, of pro-Nazi people and ideology,” Peskov said, though he refused to say if that meant regime change in Kyiv. The Russian claim of a need to “denazify” Ukraine is one Putin has touted repeatedly over the years and is baseless. Zelensky, the Ukrainian President, is Jewish.

The Russian strongman urged Ukrainian forces to lay down their arms and go home, saying all responsibility for possible bloodshed would be entirely on the conscience of the Ukrainian government.

“Our plans are not to occupy Ukraine, we do not plan to impose ourselves on anyone,” he said, but threatened “those who may be tempted to intervene” on Ukraine’s behalf.

“Whoever tries to interfere with us, and even more so to create threats to our country, to our people, should know that Russia’s response will be immediate and will lead you to such consequences as you have never experienced in your history,” he said.

The first blasts were heard at around 5 a.m. local time Thursday, and it quickly became clear that Moscow’s military assault was not limited to eastern Ukraine.

CNN teams on the ground heard explosions in and near multiple Ukrainian cities, including Kyiv; the second-largest city, Kharkiv; Odessa; and distant firing from Zaporizhzhiya.

Ukrainian officials said on social media that Russia was staging attacks far and wide, shelling control centers such as airfields and military headquarters in Kyiv and Kharkiv. The Russian military has, according to a senior US defense official, been targeting “military and air defense” targets, meaning “barracks, ammunition warehouses, nearly 10 airfields,” the official said.

Images released by Zelensky’s office showed large explosions to the east of Kyiv with huge columns of smoke rising into the air. At least seven people were killed and 17 were wounded in a missile attack on a military area northeast of the capital, Ukrainian authorities said.

Zelensky said Ukrainian forces were doing “exceptionally” in the Donbas region, and while Russian troops were slowly advancing in the Chernihiv region in Ukraine’s north, Ukrainian defenses were holding elsewhere. Russian forces did seize the Chernobyl nuclear power plant, the scene of Europe’s worst nuclear disaster.

Ukraine’s borders were reportedly under attack from Russian forces to the north in Belarus and the south from Crimea, according to the Ukrainian State Border Service. The Russian military claimed Ukraine’s border service “did not provide any resistance” and claimed to have “suppressed” Ukraine’s air defenses. CNN was not able to immediately verify either of those claims.

Three military facilities in the western Lviv region were attacked, according to the regional governor.

Ukrainian Deputy Interior Minister Evgeny Yenin told CNN that Ukrainian troops had retreated from “fierce fighting” with Russian forces for control of the strategic Antonov air base on the outskirts of the Kyiv but were staging a counterattack. Earlier Thursday, large numbers of helicopters dropped Russian troops at the air base to secure it, he said.

A CNN team spoke with Russian airborne troops on the perimeter of the air base, only about 20 miles from the heart of the capital, and heard exchanges of fire with Ukrainian forces.

The violence near the capital forced families to crowd into subway stations, as city authorities issued an air raid warning and urged residents to seek shelter underground. Across the country, Ukraine’s subway stations are doubling as bomb shelters, as the assault continues and fears of strikes grow.

Heavy traffic could be seen clogging roads heading west out of the capital as dawn broke, while further east, near the Russian border, the mayor of Kharkiv urged citizens not to leave their homes.

Ukrainians have largely remained divided about the possibility of a Russian invasion, hoping that the military buildup was just the latest in Moscow’s mind games. After months of ratcheting up tensions, the wide-scale military assault still came as a shock — especially in Kyiv, where residents had, until Wednesday, continued to go about their daily lives as foreign governments withdrew their diplomatic staff from the capital.

“You wake up at 5 a.m. to a totally new reality, and you find out the world is no longer the safe place you imagined,” one woman in Kharkiv told CNN.

While major details about the incursion — including total casualties — remain shrouded in the fog of war, UK military intelligence earlier said more than 80 strikes had been carried out against Ukrainian targets, while a senior US defense official said the Russians had launched more than 160 missiles.

Russia also deployed 75 fixed-wing heavy and medium bombers in the initial attack and initiated “some ground incursions” into Ukraine from Belarus, northwest of Kyiv, the US official added.

The Russian military released a statement Thursday claiming it was not targeting Ukrainian cities, saying “the civilian population is not at risk.” Still, many Ukrainians chose to leave the capital, while others hunkered down in shelters.