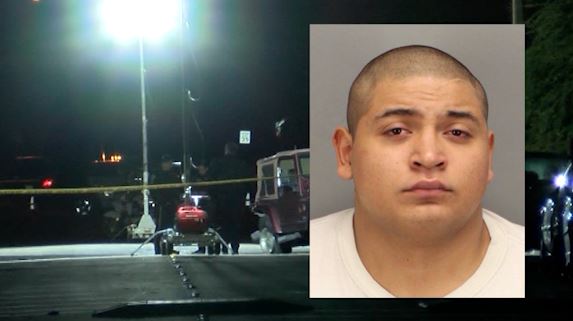 Over the course of seven days, jurors deliberated in the trial of Jose Vladimir Larin-Garcia who is accused of gunning down four people in Palm Springs.

After continuing deliberations one last time, the jury reported no progress and were “hopelessly deadlocked.”

Judge Villalobos thanked jurors for their service and a mistrial was declared, leaving four families without clarity on what happened to their loved ones.

“As much as I would like to start off this press conference with a good afternoon, I can’t in good conscience actually say that. I’m here to deliver some pretty disturbing news,” former Palm Springs Police Chief Bryan Reyes said.

On February 3, 2019, four people were found dead in Palm Springs.

Three of them were teenagers.

The three teenage victims were found inside a crashed Toyota Corolla, while the fourth victim was found thirty minutes later lying on the street about a half-mile away.

All were left with gunshot wounds.

According to the prosecution, the teens were planning to make a drug deal when Larin-Garcia fatally shot each one of the victims.

Over the course of the trial, disagreements on whether or not more people were involved in the killings pursued.

Now that a mistrial was declared, Riverside County District Attorney’s Office says they intend to retry the case.

The judge has since scheduled a trial readiness conference for June 17th and Larin-Garcia remains held without bail.