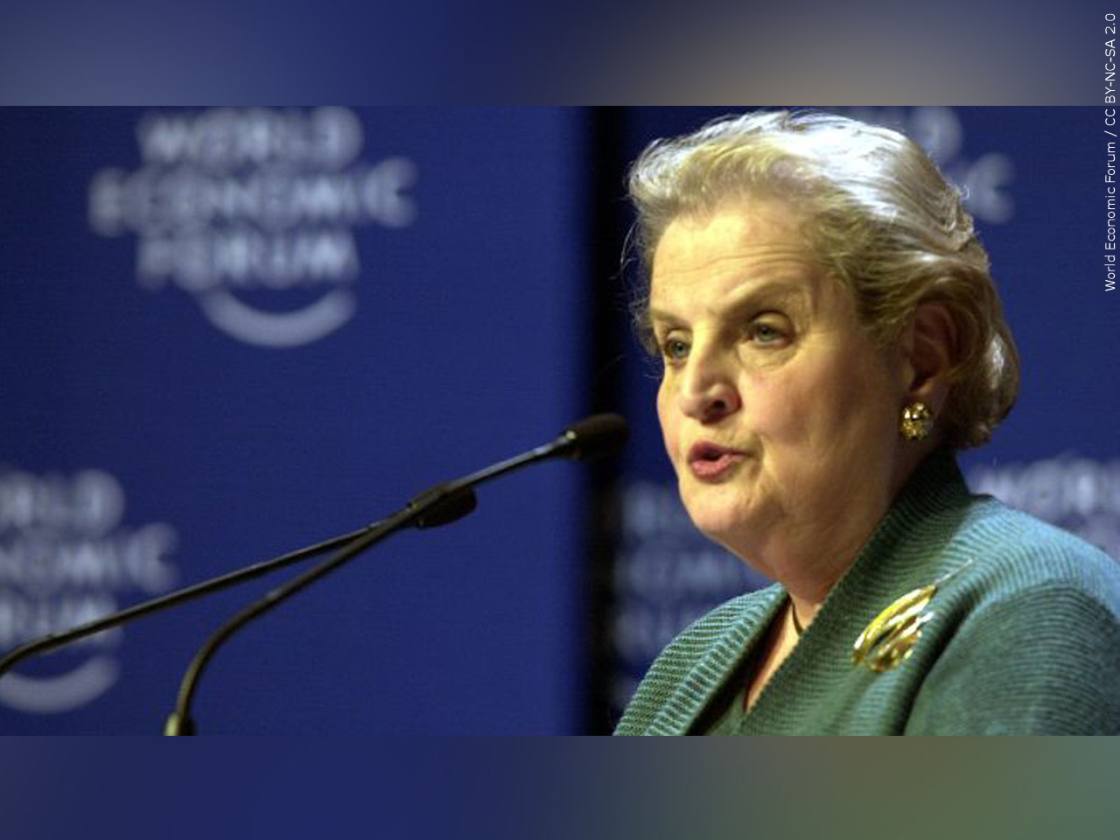 (CNN) — Madeleine Albright, the first woman US secretary of state, who helped steer Western foreign policy in the aftermath of the Cold War, has died of cancer. She was 84 years old.

Albright’s family announced her death in a statement Wednesday.

Albright was a central figure in President Bill Clinton’s administration, first serving as US ambassador to the United Nations before becoming the nation’s top diplomat in his second term. She championed the expansion of NATO, pushed for the alliance to intervene in the Balkans to stop genocide and ethnic cleansing, sought to reduce the spread of nuclear weapons, and championed human rights and democracy across the globe.

In a New York Times op-ed written last month just before Russia’s invasion of Ukraine, Albright argued that Russian leader Vladimir Putin would be making “a historic error” in invading Ukraine and warned of devastating costs to his country.

She was a face of US foreign policy in the decade between the end of the Cold War and the war on terror triggered by the September 11, 2001, attacks, an era heralded by President George H.W. Bush as a “new world order.” The US, particularly in Iraq and the Balkans, built international coalitions and occasionally intervened militarily to roll back autocratic regimes, and Albright — a self-identified “pragmatic idealist” who coined the term “assertive multilateralism” to describe the Clinton administration’s foreign policy — drew from her experience growing up in a family that fled the Nazis and communists in mid-20th century Europe to shape her worldview.

She saw the US as the “indispensable nation” when it came to using diplomacy backed by the use of force to defend democratic values around the world.

“We stand tall and we see further than other countries into the future, and we see the danger here to all of us,” she told NBC in 1998. “I know that the American men and women in uniform are always prepared to sacrifice for freedom, democracy and the American way of life.”

Perhaps most notable were her efforts to bring about an end to violence in the Balkans, and she was crucial in pushing Clinton to intervene in Kosovo in 1999 to prevent a genocide against ethnic Muslims by former Serbian leader Slobodan Milosevic. She was haunted by the earlier failure of the Clinton administration to end the genocide in Bosnia.

The breakup of communist Yugoslavia into several independent states, including Serbia and Montenegro, Slovenia, Croatia, Bosnia-Herzegovina and Macedonia, in the 1990s generated savage bloodshed unseen on the continent since World War II. The term “ethnic cleansing” became synonymous with Bosnia, where Serb forces loyal to Milosevic tried to carve out a separate state by forcing out the non-Serb civilian population.

The Clinton administration did not intervene until the massacre at Srebrenica in 1995, when Serbs killed 8,000 Muslim men and boys, which led to the US-brokered Dayton Peace Plan. But when Milosevic then tried to move his ethno-nationalist plan to Kosovo, the Clinton administration gathered a coalition to stop him doing there what he had gotten away with in Bosnia.

Albright accused Milosevic of creating “a horror of biblical proportions” in his “desire to exterminate a group of people” — Kosovo’s Muslim majority. She came under heated criticism in Washington at the time, with some calling the NATO airstrikes “Albright’s War” while others accused her of misjudging Milosevic’s resolve. To that end, Albright said in 1999, “I take full responsibility along with my colleagues for believing that it was essential for us not to stand by and watch what Milosevic was planning to do,” adding that “we cannot watch crimes against humanity.”

Ultimately, the US-led coalition did stop Serbian aggression, and Kosovo declared independence in 2008.

The effort contrasted with the Clinton administration’s opposition to international action to stop the 1994 genocide in Rwanda. At the time that Albright was representing the US at the United Nations, the Clinton administration, haunted by the military fiasco in Somalia a year earlier, argued for withdrawing the majority of UN troops from the country in the early days of the genocide. The ensuing planned slaughter of primarily ethnic Tutsis, as well as some moderate Hutus by Hutu extremists, would leave at least 800,000 dead.

Years later, Albright would call it her “greatest regret from that time.”

Late in Clinton’s second term, Albright also participated in unsuccessful talks to foster peace between the Israelis and Palestinians, which were followed by a second explosion of violence in the region. She was also part of the effort to coax North Korea to abandon its nuclear program by engaging with Kim Jong Il, an effort that was abandoned by George W. Bush.

Albright’s tenure as secretary of state also saw the al-Qaeda bombings of US embassies in Kenya and Tanzania, which killed 224 people. She called the attack the “toughest day” of her tenure but would reject criticism that it should have prompted tougher US action against the terror group that would later carry out the 9/11 terror attacks.

“It would have been very hard, pre-9/11, to have persuaded anybody that an invasion of Afghanistan was appropriate,” Albright told the 9/11 Commission in 2004. “I think it did take the megashock, unfortunately, of 9/11, to make people understand the considerable threat.”

When pressed by the commission about the argument that the Clinton administration lacked actionable intelligence, Albright said “we used every single tool we had in terms of trying to figure out what the right targets would be and how to go about dealing with what we knew.”

But she also expressed frustration about the reluctance to push ahead with military force against al Qaeda and Osama bin Laden.

“From my perspective, the Pentagon did not come forward with viable options in response to what the president was asking for,” Albright said.

Albright was aware of her role as a trailblazer and often spoke of the challenges of being the first woman to lead the State Department.

“I think that there were real questions as to … whether a woman could be secretary of state. And not just in terms of dealing with the issues, but in terms of dealing with the people, especially in hierarchical societies. … I found, actually, that I could do that,” she told CNN in 2005. “And people, I think, now can understand that is perfectly possible for a woman to be secretary of state, and I am delighted that there is second one,” a reference to then-Secretary of State Condoleezza Rice.

Throughout her career, Albright was known for wearing brooches or decorative pins to convey her foreign policy messages. When she found out that the Russians had bugged the State Department, she wore a large bug pin when she next met with them. When Saddam Hussein referred to Albright as a snake, she took to wearing a gold snake pin; when she was called a witch, she proudly brandished a miniature broom. When she slammed as “completely un-American” acting Director of US Citizenship and Immigration Services Ken Cuccinelli’s suggestion that only immigrants who can “stand on their own two feet” are welcome in the United States, Albright wore a Statue of Liberty pin.

Born Marie Jana Korbelova, the daughter of a Czechoslovakian diplomat, in Prague in 1937, Albright escaped then-Czechoslovakia with her family 10 days after the Nazi invasion. Her experience growing up in communist Yugoslavia and then fleeing to the US made her a lifelong opponent of totalitarianism and fascism. She was raised Roman Catholic, though she later converted to Episcopalian, and learned later in life about her family’s Jewish heritage.

Albright graduated from Wellesley College in 1959 and was married to Joseph Albright from 1959 until 1983, when they divorced. They had three children, twins Anne and Alice in 1961 and Katharine in 1967. She attended Columbia University for her master’s degree and Ph.D., which she completed in 1976 before launching on a decades-long career in government service and foreign affairs work under different Democratic politicians and causes.

Following her tenure as secretary of state, Albright served as chairwoman of the National Democratic Institute for International Affairs in Washington from 2001 to her death, and she taught at Georgetown University. She was also a prolific author, penning several books, including a memoir in 2003 entitled “Madam Secretary.” She also worked in the private sector for a time.

In 2012, Albright received the Presidential Medal of Freedom from President Barack Obama, who said her “toughness helped bring peace to the Balkans and paved the way for progress in some of the most unstable corners of the world.”

Throughout her retirement, Albright continued working for democracy around the world and speaking about US policy, leveling particularly harsh criticism toward President Donald Trump, whom she called “the most undemocratic president in modern American history.”

Asked by USA Today in August 2020 how she defined courage, Albright replied, “it’s when you stand up for what you believe in when it’s not always easy and you get criticized for it.”

“It took me a long time to find my voice. But having found it, I’m not going to shut up,” Albright said. “I’m going to use it to the best of my ability in terms of making sure that democracy is our form of government and that those around the world that want to live in a democracy have a possibility to do so.”

This story has been updated with additional information.