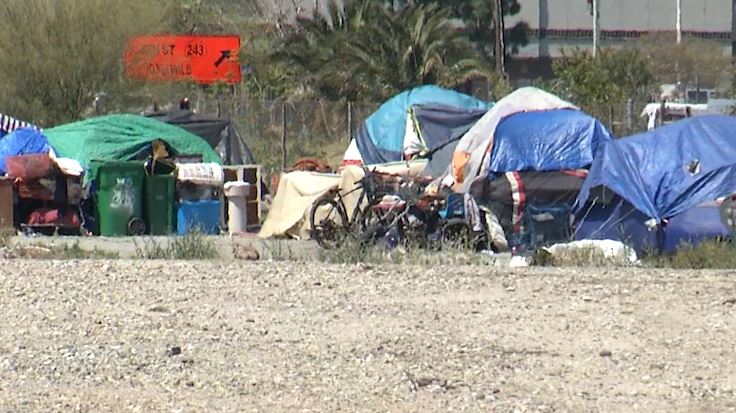 “They are still humans, you know? They have to survive too.”

Trianna Price used to be homeless.

Now, she and Christian Torres-Arias are helping people they know who are still living on the street.

The city allowed the unhoused to stay next to I-10 going eastbound, but on Monday, the people there got a notice from CalTrans saying they have three days to move all of their personal belongings, or else they could get a citation or be arrested.

This is making the people who live there unsure of where they will end up next.

“Now that the city knows about it, they think we’ll be okay,” Price continued. “And then to let them get situated over there and put all their tents up, just to tell them they have to vacate, that’s tough. Don’t just leave them out here like dogs.”

“I just can’t imagine this heat for them inside a tent,” Torres-Arias added. “That’s brutal.”

So, where are they supposed to go?

“No one is being asked to leave the site at this point,” Banning City Manager Doug Schulze explained.

“CalTrans has an easement that allows them to preserve 20 feet away from their fence lines,” he said. “So, basically all we are doing is moving their shelters and tents from the fence line into the street that’s been vacated about 20 feet.”

And the city does have a plan for the people who live there.

Schulze continued, “We are planning to establish what we are calling Opportunity Village. It will be a temporary emergency shelter. They are 64 square foot shelters that have two cot fold down beds inside, heaters, AC, two trailers that will have showers, restrooms, and laundry facilities. We will also have an on-site coordinator and security. We are basically trying to provide shelter for the homeless people and try to help get, those that want it, off the street.”

The city of Banning currently doesn’t have a homeless shelter.

Doug Schulze said that not only will this site help service providers, but he hopes it will also help the homeless population support one another.

The city hopes by June, they will start doing intake and assigning units to the population.