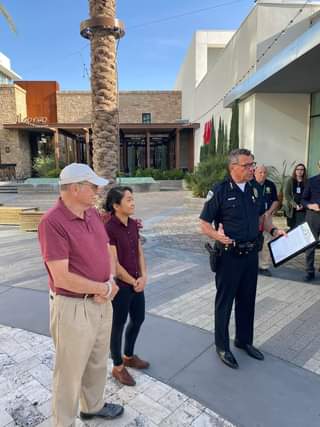 PALM SPRINGS (CNS) – A retired Palm Springs police officer received a
commendation from the department today for disarming a man who was waving what
turned out to be a BB gun in front of a Starbucks coffee shop in December.

According to Palm Springs police, a man later identified as a parolee
suffering from mental health issues pulled out what looked like a handgun
around 7:30 a.m. Dec. 13 in front of the Starbucks on Palm Canyon Drive and
began waving the weapon around.

The manager of the Starbucks quickly locked the door, but one of the
customers — Pete Rode — approached the man from behind and managed to knock
the gun from his hand.

Rode jostled with the suspect briefly before Palm Springs police
arrived on the scene and wrestled the man to the ground.

The weapon turned out to be a BB gun, although police noted it looked
like an authentic handgun, and Rode had no idea what type of gun it was when he
confronted the man.

He received a commendation for bravery and valor at a ceremony Monday
at police headquarters.