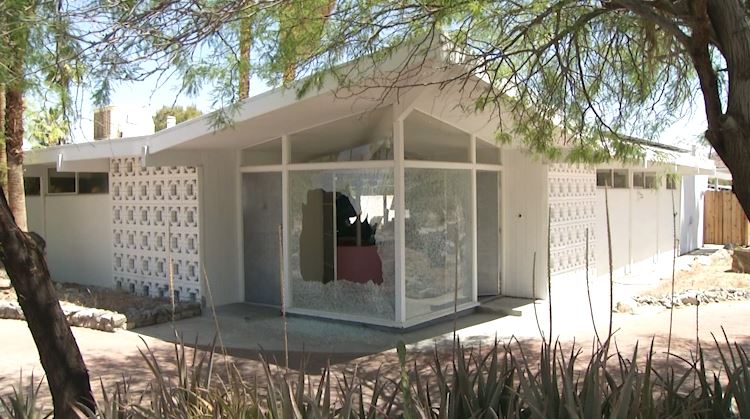 What started as making fun videos on YouTube, turned local group “The Old Gays” viral once they joined TikTok.

Reaching nearly 7-million followers and over 112-million likes, you may have seen them cruising in Palm Springs or making videos at their house in Cathedral City.

But after a day of filming in the front yard, sounds of shattered glass filled the home early Tuesday morning.

“For the first half hour to hour, I just kind of walked around, came outside and I just stared at it,” “The Old Gays” member Robert Reeves shared. “The question ‘Why?’ just keeps going through my mind.”

Robert Reeves and his roommate/fellow “The Old Gays” member Mick Peterson were home when a white car slowly drove past their home at 2 a.m. and shot what seemed to be pellets through their front windows, shattering the glass.

“It sounded to me like we were in a hail storm,” Peterson explained. “So, I checked out back and I saw there was no hail storm. I walked back out and it was obvious to me that the windows had been shot at.”

But, this isn’t the first time this has happened.

“I had one of my male, nude sculptures on display in the window and both of these windows plus one of the top windows were broken by rocks,” Reeves continued. “It’s reliving that experience that also makes it kind of hard.”

This has caused concern for Reeves and the rest of the group, wondering if they were targeted or if this will happen again.

But, this won’t stop them from making more videos and taking a stand.

“How do you get at the mind and the heart of people who harbor these kinds of thoughts? We are going to try and figure out ways to use our voice,” Reeves said.

The group has filed a police report, but the department told them it could be another 14 days until they could start seeing progress on the case.