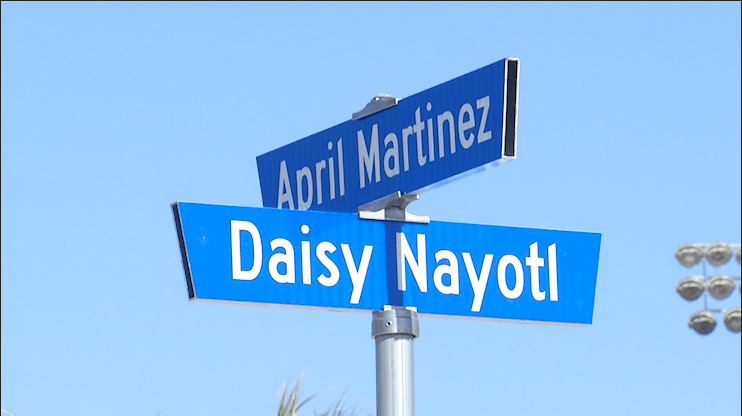 DESERT HOT SPRINGS (CNS) – Two street signs will be renamed tomorrow
and will remain so named for one year to honor the co-valedictorians of Desert
Hot Springs High School, who are also lifelong friends.

18-year-old April Martinez and Daisy Nayotl, 17, will have their names
unveiled by city, district and school officials on the corner of Pierson
Boulevard and Cholla Drive Tuesday in Desert Hot Springs at 8:30 a.m.

“We’ve always just been really academically involved,” April told
City News Service. “…We weren’t like, `’Oh yeah, let’s be the top of our
class and all these things,’ no, it just came to us.”

April and Daisy have been friends since kindergarten and have helped
each other academically through the years. They didn’t aim to be the highest in
their classes, but April told City News Service that their friendship got them
there.

Both girls plan to attend the University of California, Los Angeles in
the fall semester. They said they’ll be rooming together and will continue
supporting each other through their college years.

“I think it’s really nice to have accomplished something so big with
her by my side,” said Daisy. “…I think it’s going to be nice to still have
that connection with her and watch her grow over the next four years.”

A Palm Springs Unified School District spokesperson says that Board of
Education members, the Desert Hot Springs High School principal, united
student body members and others will attend the unveiling of the street signs
that will display April and Daisy’s name for the next year.

Shortly after, at 9 a.m., the girls will join graduating seniors for
their last rehearsal at the high school before they walk the stage in the
evening.

The co-valedictorians will deliver a three-part speech with
salutatorian Elisa Rosario about the importance of building relationships in
school and in their community.

The graduation ceremony for seniors at Desert Hot Springs High School
will begin at 7 p.m. Tuesday.