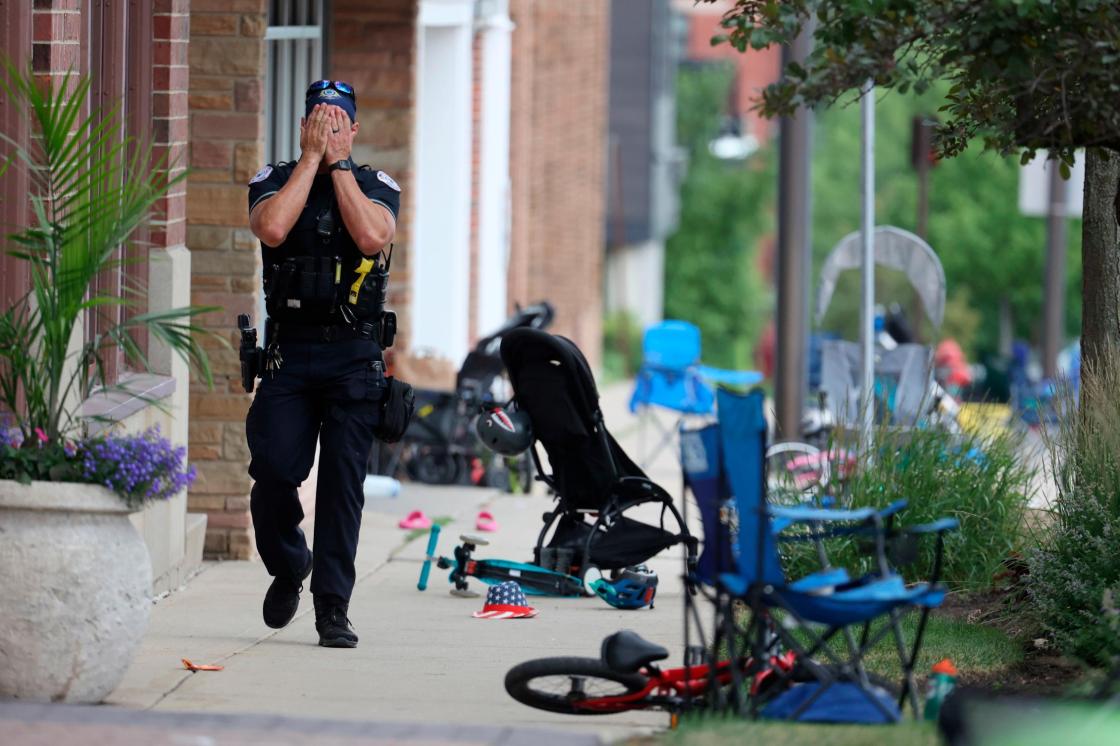 (CNN) — A mass shooting at an Independence Day parade Monday in a suburb outside Chicago left at least six people dead, wounded about two dozen others and has sparked an extensive manhunt for a gunman who fired on unsuspecting attendees from a rooftop, authorities said.

The shooting in Highland Park, about 25 miles north of Chicago, began shortly after 10 a.m. CT as parade-goers enjoyed a sunny Fourth of July parade along Central Avenue.

Highland Park Police Lou Jogmen on Monday evening identified 22-year-old Robert E. Crimo III as a person of interest in connection with the shooting. He has not been named as a suspect.

Authorities did not specify why Crimo is a person of interest but did say he was armed and dangerous.

He is believed to be driving a 2010 silver Honda Fit with Illinois license plate DM80653.

Firearm evidence was found on the rooftop of a nearby business, police commander Chris O’Neill said. The shooter used a ladder attached to the building on a wall in an alley to access the roof, said Christopher Covelli, spokesperson for the Lake County Major Crime Task Force.

The gun was a “high-powered rifle” and the attack appeared to be “random” and “intentional,” Covelli said.

Authorities are working to trace the firearm to find out who purchased it and its origins, according to Bureau of Alcohol, Tobacco, Firearms and Explosives spokesperson Kim Nerheim.

The suspect was described as a white man between 18-20 years old with a small build, long black hair and wearing a T-shirt. He was described as “armed and dangerous” and officials advised people to shelter in place.

Covelli told reporters that SWAT members and other officers have been evacuating people from buildings within a certain radius of the shooting.

Lake County Coroner Jennifer Banek said the five people who died at the scene were adults. One person died at a hospital, she said, but she didn’t have more information about that victim.

A total of 26 patients were received at Highland Park Hospital, according to Dr. Brigham Temple, the medical director of the NorthShore University Health System. The patients ranged in age from 8 years old to 85 years old — four or five were children, according to Temple.

He said 19 of the 25 gunshot victims were treated and have been discharged. There were gunshot wounds to extremities as well as more central parts of bodies, he added.

The shooting caused hundreds of parade attendees to flee and triggered a large police response of local, state and federal officers, including the FBI. Heavily armed officers patrolled the streets of Highland Park on Monday afternoon, and others were positioned on rooftops with sniper rifles.

Zoe Pawelczak, who attended the Independence Day parade with her father, said parade-goers initially thought the array of pops were fireworks given the occasion.

“And I was like, something’s wrong. I grabbed my dad and started running. All of a sudden everyone behind us started running,” she said. “I looked back probably 20 feet away from me. I saw a girl shot and killed.”

They hid behind a dumpster for about an hour until police moved them into a sporting goods store and then eventually escorted them back to their car, she said. She saw one person who had been shot in the ear and had blood all over his face and another girl who was shot in the leg, she said.

“It looked like a battle zone, and it’s disgusting. It’s really disgusting,” she said.

The incident marks at least the 308th mass shooting in the US this year, according to data compiled by the Gun Violence Archive, a nonprofit tracking such incidents. The organization defines a mass shooting as involving four or more people shot, not including the shooter.

There have been 11 mass shootings in the first four days of July, including three on July 4 alone, in Richmond, Virginia; Chicago and Highland Park, according to the Gun Violence Archive.

The carnage punctuates an already bloody American spring and summer, including an 18-year-old’s racist attack at a New York supermarket that killed 10 and another 18-year-old’s shooting at a Texas school that left 19 students and two teachers dead.

In the wake of those massacres, President Joe Biden just nine days ago signed into law the first major federal gun safety legislation in decades, marking a significant bipartisan breakthrough on one of the most contentious policy issues in Washington.

Witnesses at the scene who spoke to CNN described a peaceful parade pierced by the sudden ring of gunfire and ensuing chaos.

Miles Zaremski said he heard what he believed to be about 20 to 30 gunshots, in two consecutive spurts of gunfire, at about 10:20 a.m. CT, shortly after the start of the parade. He told CNN he saw a number of people bloodied and on the ground and described the scene as chaotic.

Video taken by a witness, Hugo Aguilera, shows an ambulance turning around on the parade route and a police car with sirens on, as people gathered on the grassy sidewalk. Aerial video from CNN affiliate WLS shows abandoned lawn chairs up and down the parade route amid a heavy police presence.

Warren Fried, who attended the parade with his wife and 7-year-old twins, said he watched the police and ambulance pass by him at the parade and afterward heard an array of gunshots. People began yelling “shooter” and “run” and he and his family fled toward their car for safety.

“People were hiding, kids were on the streets looking for their parents, just in a state of shock,” he said.

US Rep. Brad Schneider, a Democrat who represents the area, told CNN he was just arriving to Highland Park when the shots were fired and he was told to detour.

“Everyone scattered and ran. As I was going around I came across a group of young kids who were trying to call their parents to say they were OK,” he said. “So I stopped and offered them to use my phone. There were a lot of cars moving, so I helped to direct traffic for a bit.”

Jeff Leon, 57, told CNN the shots sounded like “firecrackers in a garbage can,” and it wasn’t until he saw police officers reacting, that he knew anything had happened.

“The police started reacting, and I saw some people falling,” Leon said. “We just took off. And, you know, we, we were hiding behind cars, folding into the next car and making our way.”

Jose Alamar, an employee at a nearby gas station, said about 20 people ran into the gas station and took shelter after the shooting started.

The suburb of Highland Park has a population of about 30,000 people and has a per capita income of about $90,000, nearly triple the US average, according to US Census data.

The July 4th parade was expected to feature floats, marching bands, novelty groups, community entries and other special entertainment, the city said on its website. It was scheduled to begin at 10 a.m. CT at the intersection of Laurel and St. Johns Avenues, and was set to head north on St. Johns Avenue and then west on Central Avenue and continue to Sunset Park, the city said.

Nearby suburbs, including Deerfield and Evanston, canceled their July 4th parades in the wake of the shooting. Events in other nearby communities were canceled.

The Chicago White Sox will hold a moment of silence before their home game but have called off their postgame fireworks.