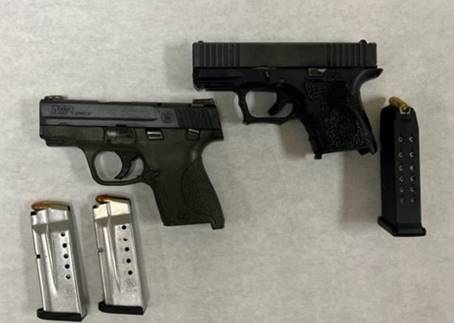 COACHELLA (CNS) – A 33-year-old woman was being held on $100,000 today
for allegedly overstaying in an Airbnb with two handguns.

Jamie Marie Dellinger of Coachella was charged with four felony counts
— of embezzlement, being a convicted felon and narcotic addict in
possession of a firearm, possessing an undetectable firearm and possessing
ammunition. She was also charged with a misdemeanor count for receiving stolen
property.

She pleaded not guilty to all charges on Wednesday at the Larson
Justice Center in Indio.

According to the Riverside County Sheriff’s Department, at about 3:30
p.m. Monday, the Coachella Community Action Team and patrol deputies responded
to the 86-100 block of Sonoma Creek in Coachella to a report of someone staying
past their paid time at an Airbnb.

Airbnb’s policy on overstaying states that the host retains the right
to re-enter the home and can make the guest leave in a manner consistent with
applicable law.

Dellinger was contacted and found to be on active county probation,
according to authorities. Deputies allegedly found in her possession a “ghost
gun” and a handgun that was reported as stolen.

Dellinger was arrested Monday and booked into the Robert Presley
Detention Center in Riverside, according to inmate records.

According to court records, Dellinger was on supervised released after
pleading guilty to two counts of vehicle theft in 2017.