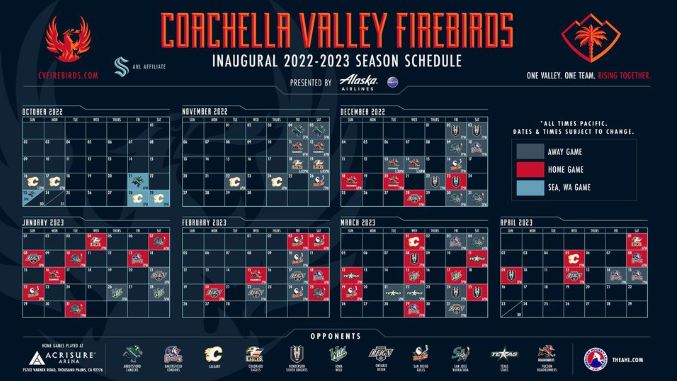 The Coachella Valley Firebirds have announced the schedule for the team’s first season in the desert. On Wednesday, the team released the home opener on Sunday, December 18, at 6:00 p.m. PT.

Prior to the home opener, the Firebirds will kick off its 72-game season on Sunday, October 16, at 12 p.m. PT with a two game series in Calgary. From Calgary, the team will head to the Seattle area as the home team to play the next four games against the Abbotsford Canucks followed by two games against the Calgary Flames’ new AHL affiliate (October 21 & 23) and (October 28 & 29).

The Firebirds will see two teams outside of their division when the puck drops against the Iowa Wild (Minnesota Wild) and Texas Stars (Dallas Stars). The Stars will be the only non-divisional team to visit Acrisure Arena on March 11 & 12. 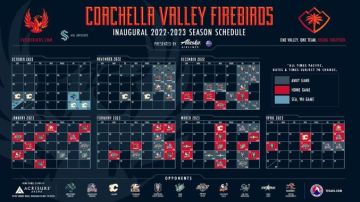 For more information and to purchase season tickets for the inaugural season, visit http://www.CVFirebirds.com or call 760-835-8778.