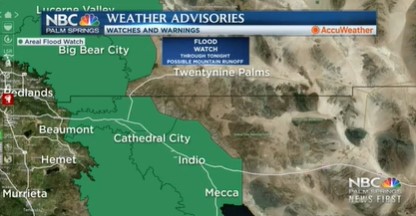 IDYLLWILD (CNS) – Thunderstorms were building in the mountains around
Idyllwild and parts of the Coachella Valley today as monsoonal moisture drifted
through the region.

The National Weather Service issued a Flash Flood Watch due to the
instability. The watch is in effect from 2 p.m. into the overnight hours and
encompasses the Anza Valley, Coachella, Idyllwild-Pine Cove, Palm Springs, the
San Gorgonio Pass and surrounding locations.

As of 1:30 p.m., radar images showed bands of convective activity
south of Anza and northwest of Desert Hot Springs. Most of the rain appeared to
be along mountain slopes and ridges.

Precipitation amounts were not expected to be significant, but heavy
downpours in short periods of time could trigger flash floods, according to the
Weather Service.

The agency said that a “giant blob of air mass” emanating from a
trough of low pressure stalled at the Arizona state line was churning up
scattered storms.

“It looks pretty ominous on radar and satellite, but they should
weaken,” according to an NWS statement.

Prognostication charts published by the Weather Service indicated that
thunderstorms may linger into the weekend, but they will be concentrated in
mountainous regions and the High Desert on Friday.

Another fetch of monsoonal moisture is forecast to arrive Sunday
afternoon, generating convective instability into Tuesday. However, any
potential rainfall will be east of the San Bernardino Mountains early next
week, according to the charts.

High temperatures in the Coachella Valley were expected to exceed 100
degrees Thursday and Friday, with 105 possible through the weekend. Lows will
generally hover in the mid-80s. In the Idyllwild-Pine Cove area, the highs will
top out in the low 80s Thursday to Sunday, with lows in the upper 60s. In the
San Gorgonio Pass, the mercury will push into the mid-90s Thursday to Sunday,
with lows in the low 70s.