‘Do not drink the water’: Mississippi National Guard will hand out water as Jackson’s main water facility fails 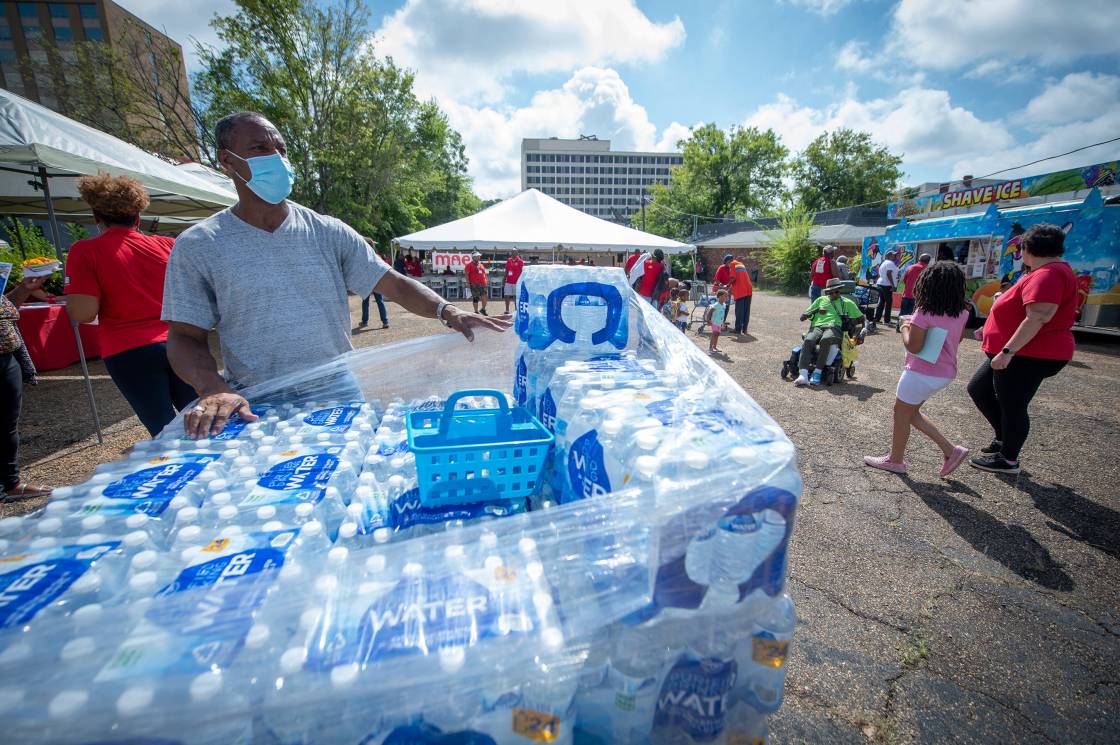 The state is declaring an emergency for Jackson as it scrambles to begin distributing drinking and non-drinking water to up to 180,000 city residents, Gov. Tate Reeves said Monday evening. The National Guard is being called to help distribute the water as crews work to get the water treatment plant back online, state officials said.

Explanations for the failing system are complicated: Damage this summer to pumps at the main water treatment facility made failure increasingly likely as the summer progressed, the governor says; and flooding of the Pearl River after heavy rains last week affected treatment processes and therefore the amount of running water the system can provide, Jackson’s mayor said.

This week’s troubles come as Jackson’s water system has been plagued with problems for years and with the city already under a boil water notice since late July for what the state called a water-quality issue.

Because of Monday’s failure, officials announced all Jackson public schools will shift to virtual learning Tuesday.

“Please stay safe. Do not drink the water. In too many cases, it is raw water from the reservoir being pushed through the pipes,” Reeves told Jackson residents Monday. “Be smart, protect yourself, protect your family.”

Residents are being told to conserve the water resources they do have and boil any water they use for three minutes.

The state is “surging our resources to the city’s water treatment facility and beginning emergency maintenance, repairs and improvements,” Reeves said, adding, “We will do everything in our power to restore water pressure and get water flowing back to the people of Jackson.”

President Joe Biden has been briefed on the water crisis in Jackson and the White House has been “in regular contact with state and local officials, including Mayor Lumumba, and made clear that the Federal Government stands ready to offer assistance,” press secretary Karine Jean-Pierre said Tuesday afternoon.

“FEMA is working closely with the state officials to identify needs, and the EPA is coordinating with industry partners to expedite delivery of critical treatment equipment for emergency repairs at the City of Jackson water treatment facilities,” she said.

In an emailed statement Tuesday, the Environmental Protection Agency said “ensuring all people have access to healthy and safe water is a top priority.”

“We are in communication with officials in Mississippi and stand ready to provide support should the State request federal assistance,” the EPA statement read. “In the interim, we are available to provide technical support and information to Mississippi officials as they navigate their plan to address the immediate concerns at the O.B. Curtis Water Plant.”

Officials announced numerous bottled-water distribution sites. Besides preparing to distribute water to residents, the state is setting up a tanker system to provide water for fire trucks as Jackson loses the ability to take water from fire hydrants, officials said.

Water for those in the state’s most populous city would have to be provided “for an unknown period of time,” Reeves said. The water shortage is expected to last “the next couple of days,” the office of Jackson Mayor Chokwe Antar Lumumba said.

Outside a Jackson store late Monday, shoppers told CNN affiliate WAPT that water there had sold out.

“It’s really hard. After work, I get off late, and you come in the store and it’s empty,” a woman told WAPT. Store shelves sat empty in a photo another woman showed the station on her cell phone.

“(At) the kitchen sink, the pressure is low. In terms of like taking a shower (or) the toilet, no, I haven’t noticed it,” Martinez told CNN of the situation in his home.

“I’ve just seen a lot of people buying water, so before the water runs out, (I) just decided to buy some water.”

Difficulties with pumps and flooding

The problem this week stems from one of two water treatment facilities in the city, the O.B. Curtis plant, which is run by the city of Jackson, according to the governor.

The main pumps at O.B. Curtis recently were severely damaged, and the facility began operating on smaller backup pumps about a month ago, around the time the latest boil water notice began in July, the governor said, without elaborating about the damage.

The governor said he was told Friday that “it was a near-certainty that Jackson would fail to produce running water sometime in the next several weeks or months if something did not materially improve,” the governor said.

Over the weekend, state officials started developing water distribution plans and “preparing for a scenario where Jackson would be without running water for an extended period.”

“All of this was with the prayer that we would have more time before their system ran to failure,” Reeves said. “Unfortunately, that failure appears to have begun today (Monday).”

Jackson’s mayor — while also emphasizing longstanding problems in the water system — pointed to recent flooding from the Pearl River as an event that triggered the latest water pressure issues.

Because O.B. Curtis received additional water from the reservoir during the flooding from last week to this week, the facility had to change the way it treats the water, which has led to the reduction of water being put out into the system and reduced tank levels. This is affecting the water pressure at residents’ homes, he said.

“As one crisis may be diverted, another one rears its head,” Lumumba said Monday during a news conference after addressing the flooding in the city.

O.B. Curtis is meant to provide about 50 million gallons for the city daily. The other plant, which usually provides about 20 million gallons daily, has been approved to ramp up its output amid the shortage, authorities said.

Jackson’s water system has been faced serious issues for years.

In early 2020, the water system failed an Environmental Protection Agency inspection. The agency wrote the drinking water had the potential to be host to harmful bacteria or parasites, based on observations of the water’s turbidity, or cloudiness, as well as “disinfection treatment concerns, and/or the condition of the distribution system.”

In March 2020, the EPA issued an order requiring the system to develop a plan to replace and repair monitoring and treatment equipment; to “address dosing processes for disinfection and pH control; and to take more coliform bacteria samples, among other things.

In February 2021, a winter storm shut down Jackson’s entire water system, leaving tens of thousands of residents without water for a month amid the Covid-19 pandemic. Residents have been under some sort of boil water notice or advisory several times since that winter storm, including the state-ordered notice posted in July.

In July 2021, the EPA and the city entered into an agreement to address “long-term challenges and make needed improvements to the drinking water system.” The EPA recently announced $74.9 million in federal water and sewer infrastructure funds for Mississippi, mentioning Jackson without naming specific projects.

However, Lumumba has said it would take $2 billion to fully repair and replace the dated system, which city, state and federal officials say also has too much lead in its water in some places.

The system’s challenges include “an aged system with deferred maintenance over three decades or more,” he told CNN Tuesday.

The city doesn’t “have the funds in order to deal with 30 years of neglect” to the water system,” Lumumba said.

“We have been actually lifting up our persistent water challenges for the better part of two years, crying out for any assistance that we could get,” he said. “Our primary focus is going after every available state dollar, every available federal dollar, in order to make these long overdue improvements to our system.”

As for restoring water pressure and flow and performing emergency maintenance and repairs, the state would split the cost with the city, Reeves said Tuesday.

“We will cash flow the operation, and the city will be responsible for half the cost of the emergency improvements that we make,” the governor said in a statement released on Twitter.

This month’s Pearl River flooding led to standing water on some streets and prompted Lumumba days ago to urge residents to evacuate flood-prone areas.

Though the Jackson area has seen little rain in the past few days after downpours last week, the Pearl River crested Monday morning just below major flood stage, according to the National Weather Service.

Lumumba previously told CNN a lack of political will and years of neglect on a national level has prevented Jackson from getting the help it needs to fix its water and sewer crisis. Besides the infrastructure issues, the plant has also been faced with staffing issues, according to the mayor and governor.

“A far too small number of heroic frontline workers were trying their hardest to hold the system together, but that it was a near impossibility,” the governor said Monday.