Canadian authorities are hunting for two suspects in mass stabbing that left 10 dead and 15 injured. Here’s what we know 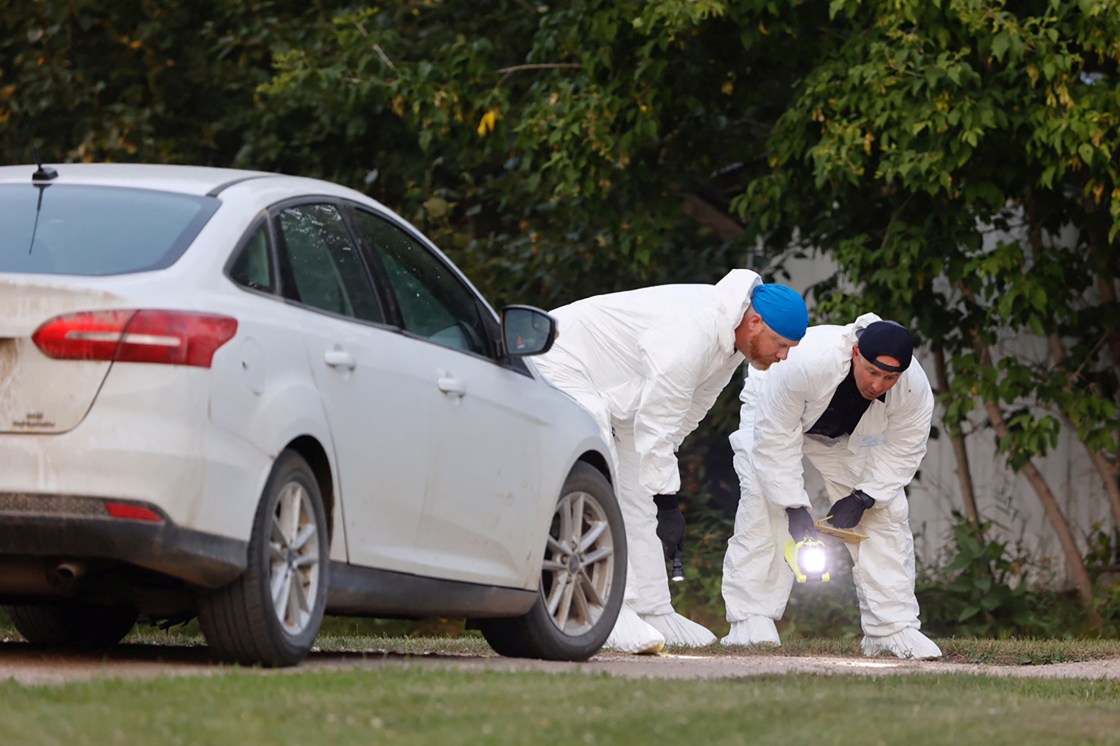 (CNN) — A manhunt is underway in Canada for two “armed and dangerous” men who are suspects in a mass stabbing Sunday that left at least 10 dead and 15 injured at multiple scenes in an Indigenous community and the surrounding area in Saskatchewan, authorities say.

The suspects, identified by police as Damien Sanderson and Myles Sanderson, are believed to have been traveling in a black Nissan Rogue with Saskatchewan license plate 119 MPI, the Royal Canadian Mounted Police said, noting it’s unclear whether the pair may have changed vehicles.

Leaders of the James Smith Cree Nation declared a state of emergency Sunday in response to “numerous murders and assaults” on members of the community, according to a news release. At least one attack also occurred in the neighboring community of Weldon, police said.

“It is certainly a very significant event if not the largest we’ve seen in the last number of years,” Assistant Commissioner of the Royal Canadian Mounted Police Rhonda Blackmore said.

Some victims appear to have been targeted, while others are believed to have been attacked randomly, police said.

Authorities are urging residents in the area to be vigilant and take precautions, including sheltering in place in some communities, as the suspects are still at large. The police issued a “civil emergency” alert warning those in the Regina area to be especially careful after police received a report the suspects may have been traveling there.

“Relentless” overnight attempts to find the two men were unsuccessful, the Regina police chief said in a Monday update.

“The two suspects are still at large, despite efforts through the night by @reginapolice and @RCMPSK,” Chief Evan Bray said in a tweet. “If anyone has information that would assist in locating and safely taking Myles and Damien Sanderson into custody, we urge you to call police.”

Canadian Prime Minister Justin Trudeau said he is “shocked and devastated” by the attacks.

“As Canadians, we mourn with everyone affected by this tragic violence, and with the people of Saskatchewan. We also wish a full and quick recovery to those injured,” Trudeau said in a statement Sunday evening.

As the manhunt continues, here’s what we know.

How did the attacks unfold?

Police received the first report of a stabbing on the James Smith Cree Nation at 5:40 a.m., and within minutes several more calls came in reporting other stabbings throughout the community, police said.

Within hours, the situation developed into a mass stabbing event with at least 25 victims, 10 of whom died, police said.

Three helicopters from STARS Air Ambulance were dispatched to James Smith Cree Nation during the attack, company spokesperson Mark Oddan told CNN. The first crew to arrive jumped into triage the victims and the second aircraft brought a physician to help with triage and lead the emergency response, he said.

The helicopter crews took some victims to the Royal University Hospital in Saskatoon and several other patients were brought to local hospitals by ground ambulances, Oddan said. He was not able to provide details on the patients or their conditions.

Multiple dangerous persons alerts were issued by police over the course of the morning, expanding across the Saskatchewan province and into neighboring Manitoba and Alberta.

“To everyone in Saskatchewan, especially those in proximity to the James Smith Cree First Nation area, please shelter in place and stay safe,” he tweeted.

Authorities have identified 13 separate scenes where the attacks took place. There may be additional victims who were injured and transported themselves to the hospital, police said, urging possible victims to contact law enforcement.

“Our thoughts are with the many victims deceased and injured, their family, friends and community. It is horrific what has occurred in our province today,” Blackmore said.

Who are the suspects?

Less than three hours after the first attack was reported, police identified Damian Sanderson and Myles Sanderson as suspects in the stabbing spree.

Officials haven’t said whether the pair are related.

The vehicle they were believed to be driving was reportedly spotted around 11:45 a.m. in Regina, police said. Regina is more than 300 kilometers (186 miles) south of the James Smith Cree Nation.

“This is why we need everyone in the province to stay vigilant and report any suspicious activity by calling 911 immediately,” Blackmore said in a statement Sunday. “If you see the suspects and/or their vehicle, do not approach them or their vehicle, immediately leave the area, and call 911.”

In a message to the two suspects, Blackmore said, “If Damien and Myles are listening or receive this information, I would ask that they turn themselves into police immediately.”

What has been the response by officials?

The attacks have shaken Canadian residents and officials.

Saskatchewan Premier Scott Moe offered his condolences to the people of the province in a tweet.

“There are no words to adequately describe the pain and loss caused by this senseless violence. All of Saskatchewan grieves with the victims and their families,” Moe wrote.

The Royal Canadian Mounted Police in Saskatchewan, Alberta and Manitoba are jointly investigating the stabbings.

“We are dedicating a maximum number of resources to this investigation,” Blackmore said.

Two emergency centers were set up to “provide health support” to the impacted communities, the leaders of the James Smith Cree Nation said in a statement.

In response to the stabbings, the Canadian Football League’s Saskatchewan Roughriders announced increased security personnel at their game against the Winnipeg Blue Bombers Sunday. The Roughriders play at the Mosaic Stadium in Regina.

“The Club operates a centralized command (center) on game day that allows immediate connection to local emergency services and the ability to receive up to the minute information when any sort of emergency occurs,” the team said in a statement on Twitter.