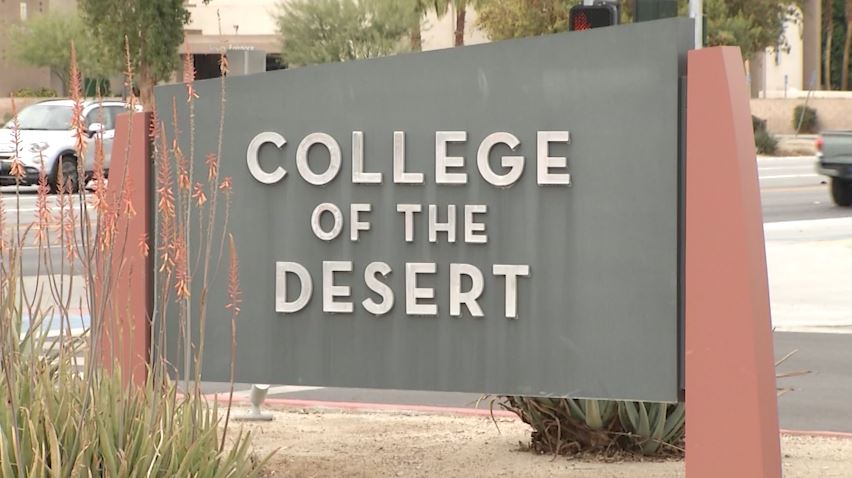 A clear message from the city of Palm Springs to College of the Desert in the form of a public records lawsuit.

“What we announced today is that we have filed a public records lawsuit, seeking to have the intervention of the court to help us recover documents that we believe are public documents that should be released and available to everyone in the public,” Palm Springs Mayor Lisa Middleton shared. “COD unfortunately has not produced in spite of repeated requests from our attorneys for the information.”

This all stems from December 8, 2021 when the city sent the college a request for public records related to campus planning for eight different locations.

Nine months later, well past the 24-day legal deadline, the city says the college has failed to produce those records for the mall site.

“Now it is time for the city to take this one step further and to sue College of the Desert in order to ensure these documents are provided,” Attorney Andrew Jared said at the press conference.

Even after all this time, remnants of the old Palm Springs mall still remain.

All this only fueling the frustration.

“These records are important to document,” Mayor Middleton continued. “How is it that COD has progressed from a campus that originally was envisioned at 650,000 square feet, and now is envisioned at 114? We don’t believe that the campus as being designed currently meets the needs of our community. It certainly does not meet the promises that were made to voters when they voted not once but twice to approve bond measures for COD, totaling nearly $1 billion.”

Now, the city hopes this lawsuit will compel the college to make those public records available sooner rather than later.

“College of the Desert has enjoyed incredibly broad support,” Mayor Middleton said. “That confidence in COD has been lost and is going to have repercussions. If COD was to come forward with the bond measure today,  broad public support in the past will not be present. That’s alarming. Hopefully as COD meets on Thursday, they will have an opportunity to reflect upon what was originally promised to not only Palm Springs, but all of the western part of the Coachella Valley, all of the valley, and reflect on whether or not the campus as is presented in August actually meets the needs of the community and meets the promises that were made to the people of the Coachella Valley. We need to restore that confidence in one of the most critical institutions in our balance.”

According to the city, 97%  of students in the west valley are economically disadvantaged, making this campus at that old mall all the more important for the community.

College of the Desert has since released a statement in response to the lawsuit:

Earlier today, College of the Desert received a copy of the complaint filed by the city of Palm Springs. COD is committed to openness and transparency in its daily operations. COD takes its obligations under the California Public Records Act seriously and responds within the time frame set by statute.  Through its lawsuit, the City suggests that the College has “delayed” responses to the City.  This is simply not the case.  The College has received several separate letters seeking different documents.  Just one of the City’s requests, for example, includes sixty-seven categories of documents, and therefore requires the College to search multiple locations for potential documents, review the documents to determine if they are responsive, assess whether they should be released pursuant to the California Government Code, and then prepare them for production.  The College has provided multiple responses documents already.  Therefore, the College has, and will continue to operate in good faith to respond to the City’s inquiries. However, the College has limited staff and several sources of documents it must carefully review and assess whenever it receives a Public Records Act request, including requests from the City. COD attorneys and the Board of Trustees will be discussing the lawsuit at a future meeting date.