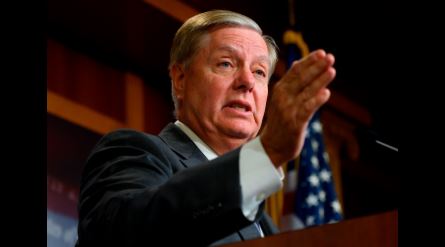 (CNN) — Sen. Lindsey Graham introduced on Tuesday a bill that would ban abortions after 15 weeks of pregnancy, the most significant proposal by Republicans in Congress to curtail the procedure since the Supreme Court overturned Roe v. Wade three months ago.

Senate Democratic candidates immediately tried to link their Republican opponents to Graham’s bill, but the South Carolina Republican defended his legislation as a bulwark against late-term abortions.

“I think the Democrats made a huge mistake in introducing legislation in Washington that would basically allow abortion up to the moment of birth,” Graham told CNN. “Now we have an alternative to that.”

The court’s decision in June set off a nationwide scramble to define the legal rights to an abortion, after it found nearly 50 years ago a constitutional right to it.

In May, the Senate failed to advance a Democratic bill establishing a federal right to terminate a pregnancy until fetal viability, or later if there’s “a risk to the pregnant patient’s life or health.” (Fetal viability occurs around 22 to 24 weeks into a pregnancy.) Graham’s bill, which has no chance of passing in a Democratic-controlled Senate, provides exceptions for abortions required to protect the life of the mother, and if the woman becomes pregnant through rape or incest.

Senate Republicans were slow on Tuesday to embrace Graham’s plan.

Wisconsin Sen. Ron Johnson, who is in a tough reelection race, would not directly answer when asked if he backs Graham’s bill. Johnson said abortion laws should be decided by “we the people” in the 50 states. The Supreme Court’s decision resurrected Wisconsin’s abortion ban, which was passed in 1849.

South Dakota Sen. John Thune, the GOP Whip, defended the new legislation, saying it will give GOP candidates a “place to land” as they get hammered by Democrats on the issue. He said most Republicans favor abortion restrictions, not an outright ban. Thune told CNN he supported the 15-week ban.

“I would expect there would be pretty good support for that among, you know, pro-life Republicans and maybe some pro-life Democrats,” Thune said.

“I also think that because the Democrats have tried to convert this into a one-sided argument that represents their singular view of the world, which is all Republicans are for an outright ban,” Thune added. “I think this changes that narrative and gives candidates a place to be for something that reflects their views and doesn’t fit the Democrats’ narrative.”

But Texas Sen. John Cornyn, a member of GOP leadership, had a different view of Graham’s bill.

“I think there are going to be some differences of opinion,” said Cornyn. “My preference is to have each state handle those issues.”

North Carolina Sen. Thom Tillis said he wanted to “focus on” inflation — the Consumer Price Index jumped 8.3% from August 2021 to last month even as gas prices decreased — and a potential strike by railroad workers.

“That’s what we ought to be focusing on,” Tillis added.

And Wyoming Sen. John Barrasso, a third GOP member of leadership, said he supported Graham’s previous anti-abortion proposals, but would not answer directly when asked if it was politically advantageous for the GOP to be introducing such a bill before the midterm elections.

The division within the Senate Republican conference in Washington extended to the campaign trail. Herschel Walker, Georgia’s GOP Senate nominee, said he supports a 15-week abortion ban, writing in a statement, “the issue should be decided at the state level, but I WOULD support this policy.” When asked to clarify whether Walker would vote for a federal bill like Graham’s despite saying the issue should be decided by the states, a spokesman for Walker responded, “Seems clear to me, that’s why it says ‘support.'”

But Joe O’Dea, the Colorado Senate Republican nominee, said that he opposed the legislation, calling for Congress to “pass a bill protecting a woman’s right to choose early in pregnancy,” while providing for “sensible limits on non-medically necessary, late-term abortion.”

“Republicans’ national abortion ban will be on the ballot, in every Senate race,” said Michigan Sen. Gary Peters, the Democratic Senatorial Campaign Committee chairman. “The GOP has shown, once again, the threat they pose to a woman’s right to make her own health care decisions — and voters will make their voices heard by standing with Senate Democrats in November.”

It’s unclear if Republicans would put the Graham bill on the Senate floor if they win back the chamber this fall.

“I don’t know the answer to that,” Thune told CNN. “My expectation, as I said before, is that anything we put on the floor would be at 60 votes, and there aren’t 60 votes, probably for anything at the moment on either side.”

House Republicans also plan on introducing a 15-week abortion ban bill. House GOP leaders have not committed to putting the measure on the floor if they recapture the majority, but House Minority Leader Kevin McCarthy has previously told CNN he supports banning abortions at 15 weeks.

McCarthy’s “Commitment to America” — a policy and messaging document that he is formally rolling out next week — only makes one passing reference to abortion, according to a source familiar with the document.

The document says Republicans will “protect the lives of unborn children and mothers,” the source said.

This story has been updated with additional developments.