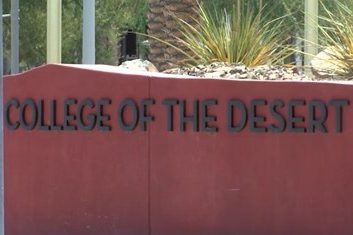 “COD needs to sit down and work with us and work with the community to make sure that we are building the facilities, again, that were promised to the voters,” Palm Springs Mayor Lisa Middleton said.

Monday, College of the Desert released its highly anticipated feasibility study for the West Valley campus.

Among those, yet another change in how large Phase 1 of construction will be, nearly a third of the original size back when Joel Kinnamon was superintendent.

A figure not seen or discussed before.

The college also admitted to potential challenges in funding operation costs of the campus, as well as no Learning Hotel for Phase 1 of construction.

Instead, they proposed mock training hotel rooms, a lobby and more.

“They called for a mock lobby so that individuals have a chance to practice in a safe environment before they or somewhere else. I applaud the group for what they recommended,” Mayor Middleton shared. “Part of why we have been so insistent on getting the records is that we’re trying to understand what was it that happened that caused COD leadership to believe they needed to shelve years of work and start all over?”

The mayor added she understands construction projects are never smooth, but just wants to know the reasoning behind these changes.

Mayor Middleton continued, “People are open to those conversations. When we don’t have conversation about why a change is needed, that’s when folks begin to wonder what’s really going on here. We want to make sure that we’re doing everything we can to give the students in our community the chance to truly prosper.”

The COD Board of Trustees will review the study in their meeting this Thursday morning.

That meeting and agenda can be found here.

Make sure to tune in tomorrow where we speak with the college to hear about these changes from their point of view.