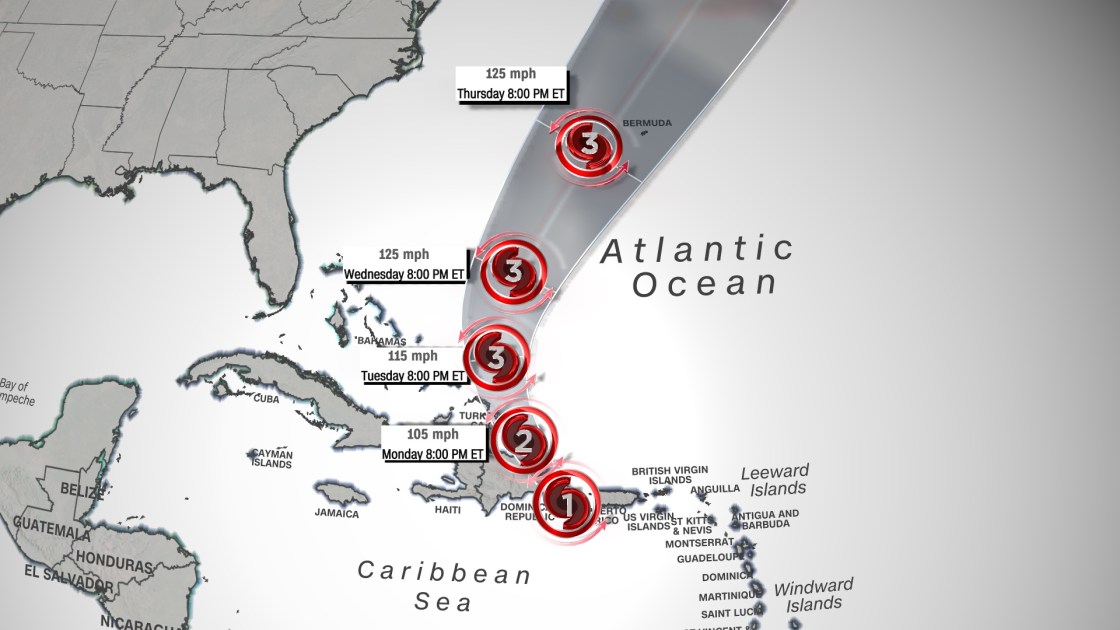 (CNN) — Rescuers are scrambling to save flooding victims in Puerto Rico after Hurricane Fiona wiped out power to most of the island before crashing into the Dominican Republic.

Even Puerto Ricans who remember the wrath of Hurricane Maria in 2017 say Fiona might be more destructive.

“A lot of people — more than (during) Maria — lost their houses now … lost everything in their houses because of the flooding,” Gonzalez told CNN’s Leyla Santiago.

“Maria was tough winds. But this one, with all the rain, it just destroyed everything in the house.”

One hundred first responders from New York will head to the US territory to help as soon as weather allows, Puerto Rico Gov. Pedro Pierluisi said, adding governors of New Jersey and California have also pledged to send help.

Fiona made landfall Monday morning in the Dominican Republic after crossing onto land a day earlier in southwestern Puerto Rico.

One area north of the city of Ponce reported over 2 feet of rain in 24 hours.

Rescues were underway Monday in the western Puerto Rican municipalities of Mayaguez and Hormigueros, officials said. The Guanajibo River in Hormigueros surpassed its previous record height set during Maria.

Meanwhile, southern Puerto Rico can expect another 4 to 6 inches of rain or more early this week — meaning Fiona will leave the island deluged with 12 to 30 inches of rain, the Miami-based National Hurricane Center said.

“These rainfall amounts will continue to produce life-threatening and catastrophic flooding along with mudslides and landslides across Puerto Rico,” the hurricane center said.

Fiona has already turned deadly in the Caribbean. At least one death was reported in the heavily-damaged city of Basse-Terre, the capitol of the French territory of Guadeloupe, the vice president of the territory’s environmental agency said.

And Fiona could become a major hurricane by Wednesday, with winds reaching 111 mph. That would make Fiona the first major hurricane of the year in the Atlantic, the National Hurricane Center said.

More than 1.4 million Puerto Rico power customers — such as homes and businesses — have lost electricity, officials said. The entire island was in the dark early Monday, PowerOutage.us reported.

And it could be days before power is restored, the main power utility in Puerto Rico said Sunday, as daily high temperatures after Monday are forecast to reach the mid-80s to 90s.

By late Monday morning, a bit of good news from island’s capital: The power system came back up for hospitals in San Juan’s medical complex, Puerto Rico Health Secretary Dr. Carlos Mellado López said. The complex is the island’s most important and stretches across 227 acres, according to the Health Administration of Puerto Rico.

“The power system at all the hospitals in the Medical Center Complex has been restored,” Mellado tweeted Sunday night. “Our patients are safe and receiving the medical care they need.”

The storm knocked 59 aqueducts out of service, leaving more than 1 million people in the Dominican Republic without running water, according to Jose Luis German Mejia, an emergency management official. At least 54 homes have been reported damaged so far, said Juan Manuel Mendez, the country’s emergency management director of operations.

Emergency officials have transported 789 people to safety, Mendez said at a storm briefing Monday. More than 500 people are housed in 29 shelters, he said.

Ten electric circuits are offline currently, but officials did not have an exact number of how many customers were without power.

“This is still an emergency event,” and the storm is still affecting the country, said Mejia.

Life-threatening flash flooding and urban flooding is forecast for eastern portions of the Dominican Republic through early Tuesday, the hurricane center said.

Fiona could also dump 12 inches of rain in eastern and northern parts of the country.

As Fiona moves away from the Dominican Republic’s northern coast, it’s expected to intensify as it moves north over warm water.

Tropical storm conditions are expected in the southeastern Bahamas by late Monday or early Tuesday, and Fiona is expected to impact the eastern Turks and Caicos on Tuesday morning.

“Fiona will continue turning northward and then northeastward this week, nearing Bermuda on Friday as a major hurricane,” CNN meteorologist Brandon Miller said.

Yet another widespread calamity

Power outages have become a familiar crisis for many who live in Puerto Rico. Just five months ago, residents suffered another islandwide blackout after a fire broke out in a power plant.

Some parts of the island still bear the scars of Maria, which inflicted catastrophic infrastructure damage; it took almost a year for power to be restored across the island.

Samuel Rivera and his mother Lourdes Rodriguez lived without power for about a year after Maria, Rivera told CNN. On Sunday morning, they lost power once again, conjuring up similar fears to those they had five years ago.

They were also concerned a nearby river might overflow and trees surrounding their home could be felled by the powerful winds, they said.

Rushing waters easily wiped away a bridge, carrying its structure downstream, one video of the dangerous flooding shows. Elsewhere in the city of Arecibo, quickly moving waters overtook large construction vehicles and entire trees as rain fell in sheets, another video by Samuel De Jesús shows.

Many rivers on the eastern side of the island were at moderate to major flood stages Sunday afternoon, including one southeastern river which rose over 12 feet in less than seven hours.

More than 300 FEMA emergency workers were on the ground to respond to the crisis, said Anne Bink, FEMA’s associate administrator for Response and Recovery.

“Our heart goes out to the residents that again are going through another catastrophic event five years later,” Bink said, nodding to Maria. This time, she said, FEMA plans to implement lessons learned from the 2017 crisis.

“We were much more prepared. We have four warehouses now strategically located throughout the island, which includes commodities, exponentially larger supplies than in the past,” Bink said.

“We’re proactively there — and well ahead of any storm hitting — to make sure that we are coordinating. And all of the planning efforts we undertake during those blue skies days can be brought to bear when the rain falls.”