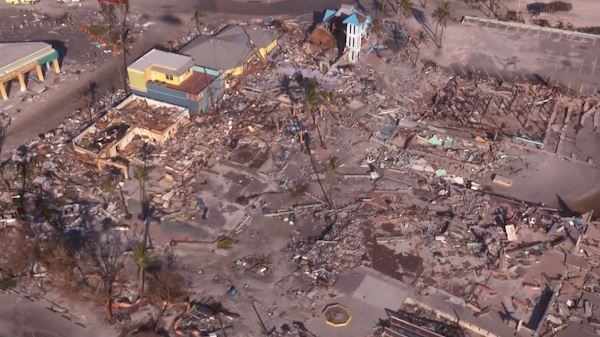 (CNN) — The number of people killed in Florida by Hurricane Ian rose to at least 100 on Monday, days after the storm made landfall at Category 4 strength, decimating coastal towns and leaving rescue crews searching for survivors while communities face the daunting task of rebuilding.

At least 54 people died in Lee County alone, Sheriff Carmine Marceno said Monday — up from the county’s previously announced death toll of 42 — and officials there are facing questions about whether evacuation orders should have been issued earlier. Twenty-four deaths were recorded in Charlotte County — up from 12.

Hurricane Ian also contributed to the deaths of eight people in Collier County, five in Volusia County, three in Sarasota County, two in Manatee County, and one each in Polk, Lake, Hendry and Hillsborough counties, officials said. Four other people died in storm-related incidents as Ian churned into North Carolina.

More than 1,600 people have been rescued from Hurricane Ian’s path in parts of southwest and central Florida since last week, Gov. Ron DeSantis’ office said Sunday.

Now, as blue skies return, Floridians who took shelter while the hurricane raged have emerged — many of them still without power or clean drinking water — to find their communities unrecognizable.

Almost 530,000 homes, businesses and other customers in Florida still did not have power as of Monday evening, according to PowerOutage.us. Power may not be restored on Fort Myers Beach for 30 days due its electrical infrastructure being destroyed, Lee County Manager Roger Desjarlais said.

The National Guard will be flying power crews to Sanibel and Pine islands to assess the damage and start working on restoring power, DeSantis said.

Many residents are without clean tap water, with well over 100 boil-water advisories in places around the state, according to Florida Health Department data.

In Naples, Hank DeWolf’s 4,000-pound boat dock was carried through a condo complex by the powerful hurricane, landing in his neighbor’s yard. And the water brought someone’s car into his own backyard. He doesn’t know who it belongs to or how to remove it.

As crews in Naples comb through the wreckage to make sure no one is still trapped, residents face the enormous task ahead of cleaning up and restoring the city, Jay Boodheshwar, city manager of Naples, told CNN.

“People need to take care of their emotional and mental health, because we’re really going to need to work together on this,” Boodheshwar said.

Naples received record-high storm surge, when the hurricane sent rising ocean water flooding into the city’s streets and tearing through its infrastructure.

“The amount of water that we received and the height of the surge affected a lot of the infrastructure,” Boodheshwar said. “So there are transformers that are fried. It is not simply rehanging lines. There are things that may need to be replaced.”

In Lee County, Desjarlais said officials cannot stop residents from coming home, but with no water or electricity and with extensive damage, it’s not safe.

Similar scenes are playing out in other communities. Hurricane Ian — expected to be the most expensive storm in Florida’s history — devastated neighborhoods from the state’s western coast to inland cities like Orlando.

In some cases, emergency workers out searching for signs of life are at the same time contending with losing their own homes.

“Some of the guys on Pine Island, they lost everything, but they’re doing what they can,” said emergency physician Dr. Ben Abo, who was preparing to join first responders on a rescue mission Sunday near decimated Sanibel Island and Pine Island.

And the flooding isn’t over yet.

Seminole County continues to experience significant flooding in certain neighborhoods, with families being rescued from waist-high waters over the weekend.

FEMA alone cannot rebuild and provide assistance to all the communities impacted by Hurricane Ian, former FEMA Administrator Craig Fugate told CNN on Sunday. The US Department of Housing and Urban Development can provide grants to communities impacted by hurricanes and other natural disasters to help people get back on their feet, Fugate added.

“It’s just not the coast of Florida that’s been impacted. We’ve got impacts all the way through Orlando, up to the East Coast. Places like St. Augustine had devastating flooding,” Fugate stressed.

Questions over timing of evacuation orders as deaths mount

Lee County officials have faced criticism about why the first mandatory evacuations weren’t ordered until a day before Ian’s landfall, despite an emergency plan which suggests evacuations should have happened earlier.

DeSantis has said Lee County officials acted appropriately when they issued their first mandatory evacuations on Tuesday, less than 24 hours before Hurricane Ian made landfall on the barrier island Cayo Costa, and a day after several neighboring counties issued their orders.

Desjarlais said the county made the decision to evacuate at the earliest time possible.

“It’s unfortunate that so many people chose not to evacuate,” he said. “You know, I think I told you the other day we had room for 40,000 people in our shelters, but only 4,000 showed up, which means that people made the conscious choice not to evacuate, and it is regretful and you know, no one feels worse than we do about all that.”

But people are “used to longer evacuation orders,” Shawn Critser, a pastor in Fort Myers Beach, told CNN Monday. “But we got it the day before.”

In the days leading up to the storm, Critser believed — like many others — that the heaviest impacts would be felt farther to the north, near Tampa Bay. But then the forecast was revised, showing the storm’s track shifting to the south.

“When that evacuation order came, we’re like, ’24 hours, that’s not a lot. But we’ll still kind of make it,'” Critser said. “And it wasn’t until Wednesday morning when we woke up and saw that it had made another adjustment. And at that point, it’s just too late.”

Sheriff Marceno stood by the handling of the evacuation orders Monday, saying he was “confident in our county manager, our leaders, our governor, all of us in law enforcement that we got that message out at the right time.”

“We were not in the cone,” he said, noting the storm was tracking north towards Tampa before shifting south.

“Mother Nature taught us a lesson,” he added. “It’s unpredictable. But I’m confident in the decisions that were made. And like I said yesterday, stand by them, and I wouldn’t change anything.”

Hard-hit Sanibel Island will be ‘out of commission’

Hurricane Ian wiped away parts of the Sanibel Causeway, which connects Sanibel Island to the mainland, stranding residents as their only link became impassable.

Search and rescue personnel have been going door-to-door searching properties for anyone who may need to be evacuated, and nearly 100 members of Miami-Dade Fire Rescue continue to conduct rescue efforts along Southwest Florida’s Barrier Islands like Sanibel, Captiva and Pine Island.

“People aren’t getting a whole lot of information right now. So whatever we can offer, that’s what we’re here for,” Steele said.

Officials said food is being dropped at fire stations on Pine Island.

About 400 people evacuated from Sanibel Island over the weekend, City Manager Dana Souza reported Sunday evening, adding authorities will begin turning their attention to providing medical services to the people who are choosing to stay on the island, rather than evacuations.

Abo “wouldn’t be surprised” if the death toll significantly increases, he told CNN, as rescue and recovery efforts continue on Sanibel Island.

US Coast Guard Commander Rear Admiral Brendan McPherson offered a stark assessment of the damage to Sanibel Island, saying the “area is going to be out of commission for some time.”

“It was hit very hard,” he said. “It does not have water. It doesn’t have the basic infrastructure.”

Amy Lynn was at her friend’s home on Sanibel Island when Ian hit, forcing her to hide in a closet with seven dogs, praying and holding the door shut as the hurricane roared outside.

When she came out, the home had been badly damaged, with walls blown off, video showed.

“I prayed for 6 solid hours and came to peace that it may be my time to go. It wasn’t. God is good. We made it out alive,” Lynn wrote on Facebook. “We lost everything. My car is gone. I haven’t seen my home on Sanibel. I’ve been told it’s destroyed.”

Lynn was thankful to be alive, but, she wrote, “This is so much more than devastating. The heart of the (Southwest Florida) coast is forever changed.”

Power could be out for weeks

Some residents and businesses in storm-damaged counties may not be back on the grid for “weeks or months” because of the structural damage caused by the hurricane, said Eric Silagy, president and CEO of Florida Power & Light Company.

FPL expects to have power restored by Sunday to 95 percent of its 126,700 customers in Charlotte County, which includes Punta Gorda, Patrick Fuller, the county emergency management director said Monday. About 45% of its customers have had power restored already.

In the meantime, much of the county remains under a boil water advisory, and Punta Gorda, the county seat, will be operating under the notice for at least three days, the city said on Facebook.

Florida is also working with SpaceX CEO Elon Musk to use his company’s Starlink satellite Internet service to help restore communication in the state, according to DeSantis. “They’re positioning those Starlink satellites to provide good coverage in Southwest Florida and other affected areas,” DeSantis said.