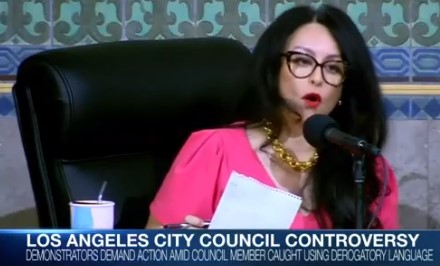 (CNS) – Nearly half of the Los Angeles City Council signed onto a motion Tuesday calling for council members Nury Martinez, Kevin de León and Gil Cedillo to resign for taking part in a conversation with a top county labor official that included racist comments aimed at Councilman Mike Bonin’s 2-year-old Black adopted son, and at other ethnic groups.

The motion, signed by Bonin, Marqueece Harris-Dawson, Nithya Raman, Bob Blumenfield, Paul Koretz, Heather Hutt and Mitch O’Farrell, states that the comments made in the recording “exposed layers of contempt for the people of Los Angeles and a cynical, ugly desire to divide the city rather than unite and serve it.”

The motion describes the conversation as “vile, abhorrent, disgraceful and demonstrates a culture of corruption in our Council Chambers. It is unbefitting of any public office.”

Separately, seven council members also called for their colleagues to be censured.

According to the city charter, council members can be censured with a two-thirds vote if they conduct actions that “constitute a gross failure to meet such high standards, even if the action does not constitute a ground for removal from office under the Charter.”

Martinez, de León and Cedillo are facing mounting calls to resign their seats completely, both from some of their colleagues, public officials around the state, local civil rights and faith leaders and members of the public who spoke at the council chamber on Tuesday.

Martinez announced a leave of absence Tuesday, but has defied calls to resign, as have de León and Cedillo. Los Angeles County Federation of Labor President Ron Herrera, the fourth official who took part in the conversation, resigned Monday.

With full attendance, the council would need 10 members to vote to censure Martinez, de León and Cedillo.