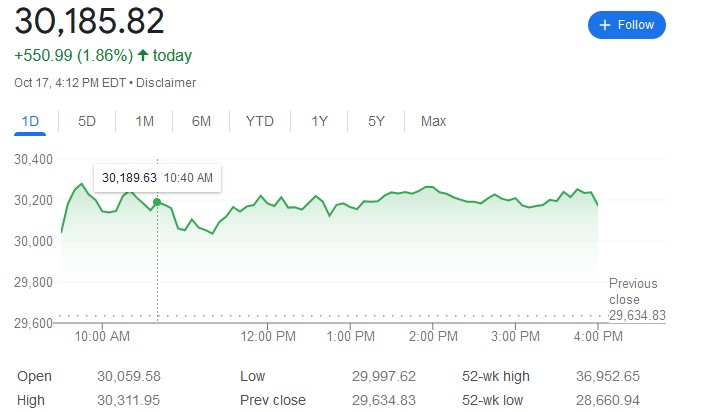 (CNN) — Stocks rallied sharply Monday, thanks to more strong earnings from big banks and a sigh of relief about new plans by the United Kingdom to scrap a controversial tax cut plan.

The Dow gained more than 550 points, or 1.9%, and moved back above 30,000. Solid results from Bank of America, BNY Mellon and Charles Schwab, helped lift market sentiment.

The S&P 500 surged 2.7%, and the tech heavy Nasdaq rose 3.4%. It was a broad-based rally, with every stock in the Dow finishing higher except for Walgreens. All eleven market sectors ended the day with gains. The three major market indexes are now up for the month of October as well.

Investors will be focusing on tech earnings that are on tap later this week, with Netflix, Tesla and IBM due in the upcoming days. Tech stocks got a boost Monday after gaming giant Roblox reported better-than-expected September bookings figures, a measure of sales for its virtual Robux currency. Roblox soared 20% on that news.

Investors are keeping a close eye on third-quarter earnings for signs of a potential recession in the United States. Traders are also watching developments abroad, most notably in the United Kingdom.

The markets were rattled last week after the British pound plunged following plans from the new Liz Truss government to cut taxes on the wealthy and businesses while also spending more on energy subsidies to help consumers dealing with surging energy costs.

But UK’s new finance minister Jeremy Hunt rolled back much of the tax cuts in a stunning reversal Monday. The pound rebounded on that news, helping to lift stocks in the process.