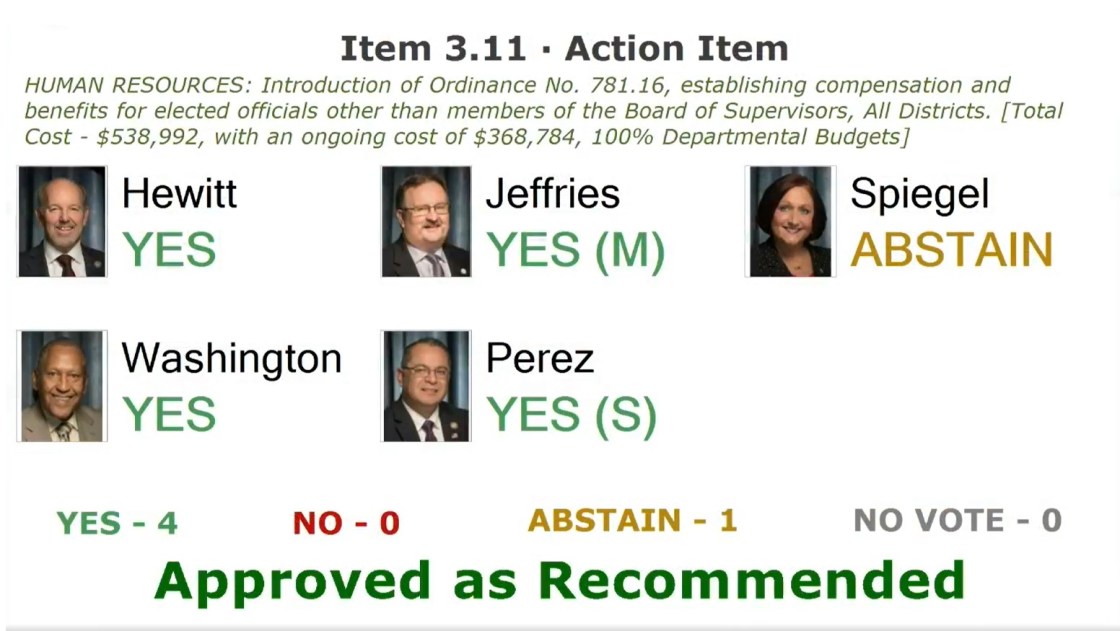 (CNS) – In a 4-0 vote, the Board of Supervisors Tuesday rejected proposed double-digit percentage salary increases for five Riverside County elected officials, whom one supervisor said he respected but did not believe were entitled to enlarged paychecks.

“Please, if you like, you can spend time explaining why these poor elected officials (are) being starved to death, but don’t waste your time on me,” Supervisor Kevin Jeffries said ahead of the vote.

Joining the supervisor in his opposition were board Chairman Jeff Hewitt and Supervisors Manuel Perez and Chuck Washington. Supervisor Karen Spiegel abstained.

“I really don’t see any reason right now to propose higher salaries,” Perez said. “If folks want to study this further, they can. But right now, I’m not supporting this.”

Spiegel signaled a willingness to entertain the proposed hikes but requested additional time so the Executive Office could produce a more thorough report justifying the timing, process and necessity of the requested raises. Her motion to delay the vote to January was opposed 3-2.

“These are fine individuals, but they ran knowing what their salaries were going to be,” Moreno Valley resident Roy Bleckert, a frequent commentator on board actions, said before the vote. “Passing this right after an election is sticking it to the people who pay those salaries. Why is this even on the agenda with no staff report? There’s nothing. We have a problem here.”

Jeffries complained that the “optics” were bad, given the board’s recent denial of pay adjustments for In-Home Supportive Services caregivers.

“We have a new auditor-controller who, without ever even stepping into the building, is alleged today to be entitled to a $61,000 pay raise,” the supervisor said. “A month ago, the in-home workers came asking for a $1.50 per hour raise. We said, sorry we cannot give you an additional buck-fifty. But now we’re going to give the new auditor-controller $61,000?”

According to the Department of Human Resources, the proposed pay hikes were intended to bring the officials’ salaries up to levels that ensure they’re not making less than some of their executive-level underlings, who are receiving hefty salaries thanks to collective bargaining agreements and other factors.

In government speak, when the boss makes less than a subordinate, the disparity is known as “compaction.”

The last round of raises for all five positions was in 2014. However, Hestrin, individually, received a raise in 2018.

The 2014 hikes were approved on a 3-2 vote of the board, with then- Supervisor Jeff Stone joining Jeffries in opposing the increases, arguing that the effects of the Great Recession were an ongoing drag on the county’s finances, and there was no justification for boosting officials’ base pay.

Jeffries, now the most senior board member, has declined all proposed salary increases for himself in the last decade.

The salary hikes would have increased annual base compensation for the assessor-clerk-recorder, auditor-controller and treasurer-tax collector by 32%, from $195,192 to $256,814.

The Department of Human Resources said “external market surveys” were conducted to gauge the appropriate compensation levels for the five elected officials going forward. The surveys weren’t included on the board’s policy agenda.

Salary schedules analyzed by City News Service showed that, had the increases been approved, both the sheriff and D.A. would have received annual base compensation rivaling the earnings of counterparts in surrounding counties.

Data on 2021 compensation formulas for government officials statewide is available at http://www.publicpay.ca.gov.