81st Anniversary of `Day of Infamy’ to be Remembered in Norco 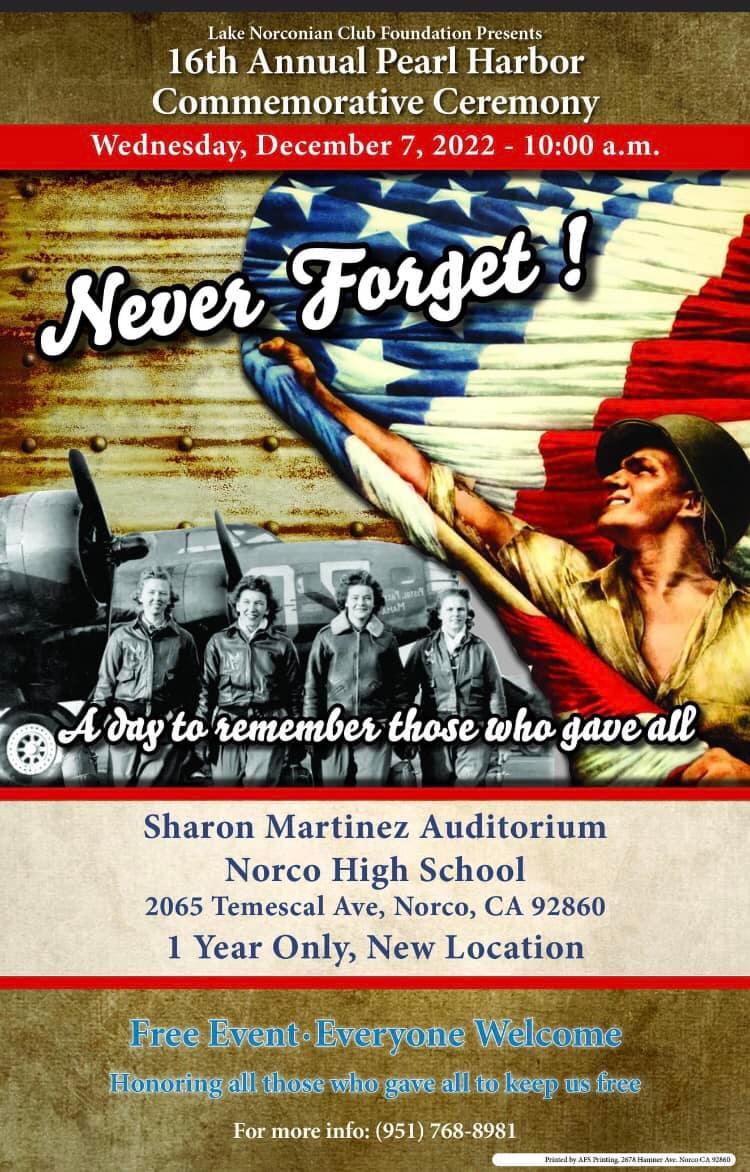 (CNS) – The 81st anniversary of the attack on Pearl Harbor will be commemorated Wednesday during a ceremony in Norco, featuring patriotic music and recollections from that “Day of Infamy,” which propelled the United States from neutral to Allied leader in World War II.

The Lake Norconian Club Foundation is hosting the commemoration, officially themed, “Never Forget: A Day to Remember Those Who Gave All.” The free public ceremony will begin at 10 a.m. in Norco High School’s Martinez Auditorium, 2065 Temescal Ave.

The event is intended to honor all service branches, not only the U.S. Navy, which will have a large presence, with representatives from the nearby Corona Naval Surface Warfare Center, part of U.S. Naval Sea Systems Command, on hand.

There will be several speakers who will impart a brief history of Dec. 7, 1941, as well as pay homage to those who made the ultimate sacrifice that day.

There will be a Color Guard presentation during the commemoration, followed by reflections and patriotic music.

The ceremony was relocated away from the Navy base this year — in what organizers described as a one-time change of venue — due to renovations on the grounds of the installation.

More than 2,400 U.S. soldiers, sailors and Marines died defending the Hawaiian naval base from Japanese attackers in a two-hour air assault. The following day, Dec. 8, 1941, the United States declared war on Japan, which led to the Axis powers uniformly declaring war on the U.S., marking the nation’s official entry into World War II.

Just before 8 a.m. on Sunday, Dec. 7, 1941, Japanese torpedo bombers, dive bombers and fighters — altogether numbering more than 350 aircraft — arrived in two waves, permanently sinking two battleships, the USS Arizona and Utah at Pearl Harbor. The Arizona’s losses totaled 1,177 — the highest of any ship in the harbor.

Most of the military vessels that went down in the surprise attack were resurrected and deployed to fight again.

Bellows, Hickam and Wheeler airfields were also bombed, as well as the installations at Ewa, Ford Island and Kaneohe Bay, inflicting major damage.

Imperial Japan carried out the attack in an attempt to cripple the U.S. Pacific Fleet as it sought domination over much of Asia.