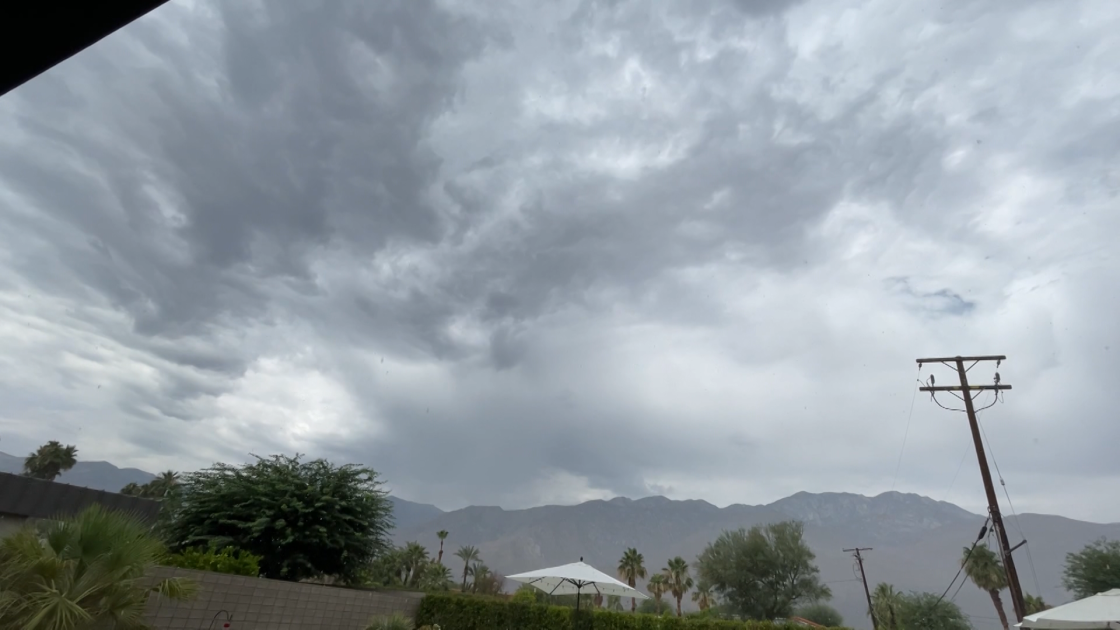 I spoke with some sun-seeking visitors on how they feel about the gloomy weather.

Even with the slightest rain we get here in the Coachella Valley, locals and tourists can all feel the effects.

“A little bit of a bummer because we’re leaving today. So we were kind of expecting it to be cold but not that cold because yesterday it was actually really sunny and we went to the zoo and so that was the best time to go but today’s a little gloomy here.” says Sophie Uehara, visiting from Arizona.

With the holiday season, many travelers hit the skies or the road for sunny weather.

Many of them flock to the Coachella Valley, but this time it wasn’t what they were expecting and some even called it quite surprising.

“I mean we were not expecting this at all… I mean we had been planning this for at least a month, and it just, the rain surprised us all.” says Frances Muro, visiting from Grand Terrace.

“Being able to just walk around and check out the shops is really difficult.” Uehara emphasizes.

Other visitors said, although it’s different from what they’re used to… it’s nice to have change every once in a while.

And for some just stopping by to pump gas, the rain is the last thing they hope to endure on their traveling journey.

“We work in Yuma for six months out of a year, so it’s been tough. I think my drive right now has been six hours, out of the six hours, five hours have rained.” Jesus Martinez, a visitor passing through says.

But the rain isn’t putting a damper on everyone’s plans.

“As of right now, it’s really snowing, it’s the perfect day to go sledding if people want to come out and bring their sleds and really enjoy the snow. It’s actually snowing so a lot of people don’t get to experience it.” Madison Morgan, the Public Relations Manager for the Palm Springs Aerial Tramway says.

They’re hoping for even more.

“As of this morning, we got about two inches right now, but I do know the forecast shows that we could get up to a foot of snow.”

The Palm Springs Aerial Tramway continued its decades-long tradition of hosting a choir performance from local high schools around the valley in honor of the holiday season.