Board Chair Presides over Final Meeting Before Exiting County Service 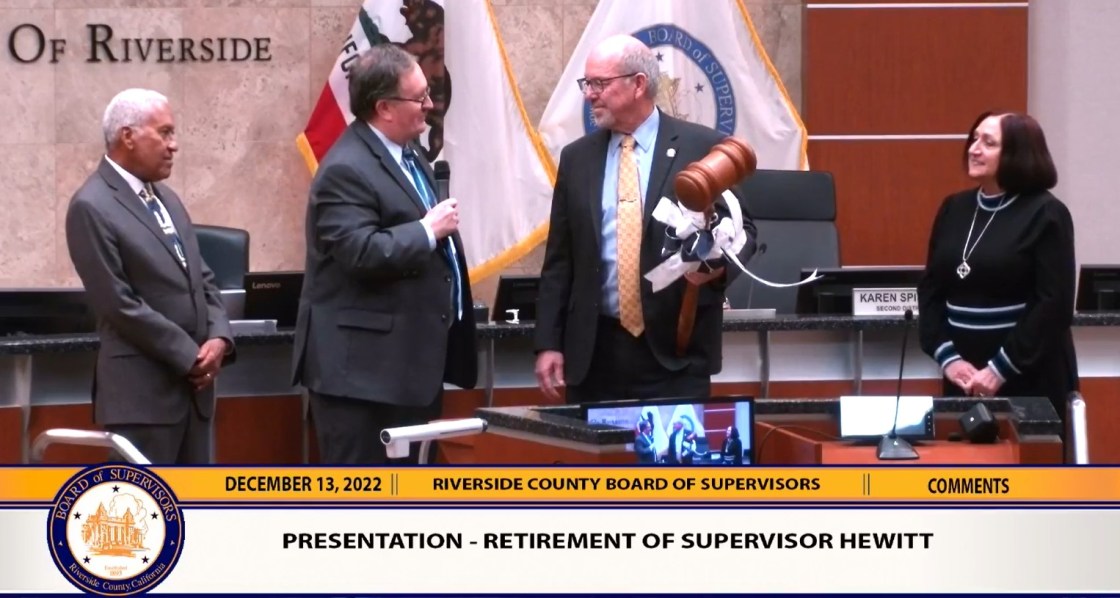 (CNS) – Riverside County Board of Supervisors Chairman Jeff Hewitt presided over his last meeting Tuesday, ahead of his exit from county service following his defeat for re-election, telling his colleagues it was an “honor to work with a lot of very capable and special people.”

“Thank you to all my colleagues,” Hewitt said, standing at the head of the dais in the board chamber at the end of Tuesday’s meeting.

“There are so many instances over the last four years that I’ve been honored to be part of,” he said. “Some things we did extremely well. Some things we didn’t get right the first time. But every time I’ve come into this room, I’ve always felt it was a great privilege to have the trust of the people of this county, especially the Fifth District.”

Supervisors Kevin Jeffries and Karen Spiegel presented the chair with an oversize, all-wood gavel — with nearly the same dimensions as a sledgehammer — as a parting gift, eliciting laughs from Hewitt, who thanked them and quipped, “Nancy Pelosi, eat your heart out!”

“This fits real well with your personality, trying to get things done here,” said Jeffries, who will be rotating into the chairmanship at the start of next year. “We wanted to thank you. I’ve enjoyed my service with you. It’s been fun — most of the time.”

“We didn’t always agree, but most of the time, we did,” she said. “We picked the battles. You and I built our relationships at the city level and each brought something different to the table. We all have something different to offer, and you brought a different look at things. It’s important to make the engine go and the team run. I appreciate your time here. You did a great job.”

Both Hewitt and Spiegel were first elected to the board in November 2018.

“I’ll never consider my constituents anything less than the best in the world,” he said.

Hewitt’s chairmanship did not muster unanimous support when his turn came in January to rotate into the seat — a first in the current century for Riverside County.

Supervisors Manuel Perez and Chuck Washington abstained from voting for the chair, leaving it to Hewitt, Jeffries and Spiegel to affirm the Fifth District supervisor as the chairman.

Perez and Washington did not state their reasons at the time, though both publicly endorsed Hewitt’s opponent — Moreno Valley Mayor Yxstian Gutierrez, a fellow Democrat — in the June primary and November general elections.

“You and I disagreed on many things,” Washington said. “I know you wanted to do the best for your constituents.”

Perez also noted the men’s divergent positions, saying “we could agree to disagree. I appreciate the work you did.”

He was elected to the board following a stint as mayor of Calimesa.

Hewitt counted among his accomplishments during the last four years as Fifth District supervisor efforts to expand the Moreno Valley (60) Freeway through the Badlands, construct “safe routes to school” and secure improvements on the Ramona Expressway.

The incumbent was among candidates for governor in the unsuccessful recall election of September 2021. He was also an outspoken opponent of the coronavirus public health lockdowns, and after hearing from impacted residents and business owners about the hardships created by the mandates, he was the lone voice in favor of the county outright rejecting them.

He later modified his position and instead advocated for a piecemeal approach to removing the county from the state’s controlling measures, resulting in a proposal in September 2020 for the county to establish an independent “Reopening Plan.” Under the concept, the Executive Office would have established criteria different from the governor’s color-coded tier system then in place — all aimed at expediting a return to normal commerce.

The plan was adopted, but in a significantly watered-down form that Hewitt opposed and resulted in virtually no change from the status quo.