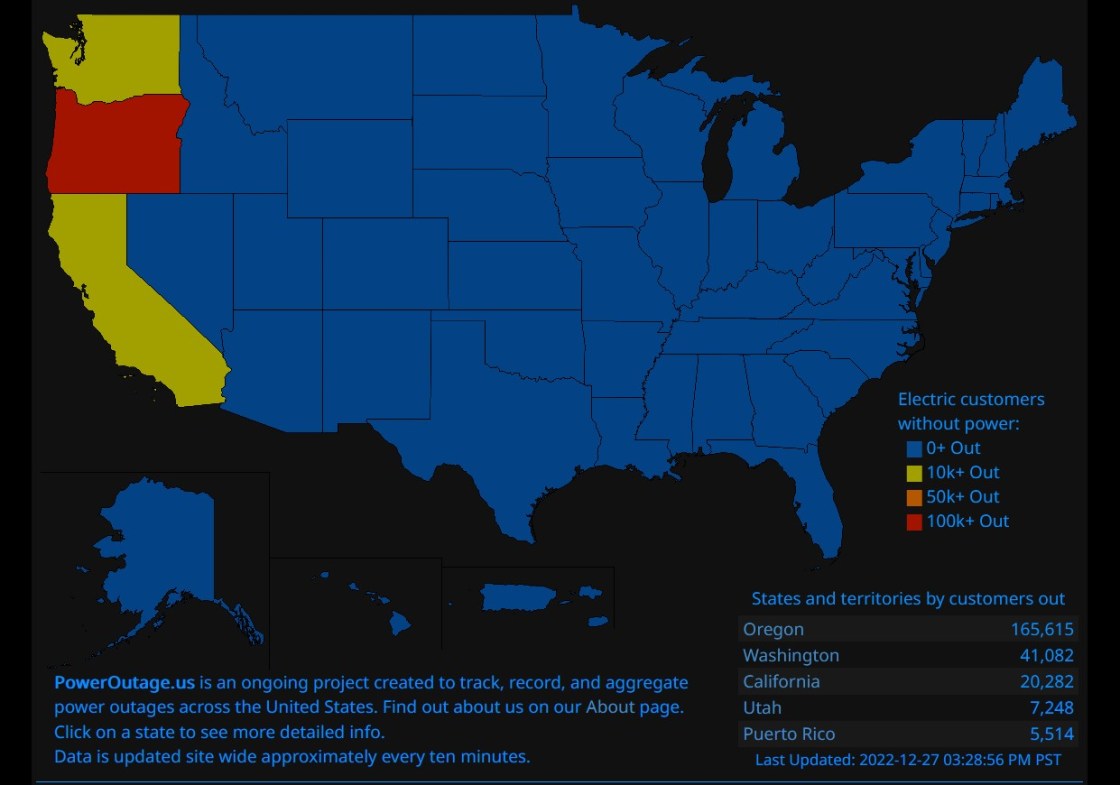 (CNN) — Heavy coastal rain and mountain snow from a potent atmospheric river are falling across the western United States, with more to come later this week.

All 11 Western states are expecting rain or snow, with the heaviest impacts predicted for California. By mid-afternoon Tuesday, the rain, snow and wind have already knocked out power to about 126,000 customers in Oregon, 28,000 in Washington state and 22,000 in California, according to poweroutage.us.

The atmospheric river — a long, narrow region in the atmosphere that can transport moisture thousands of miles — is the reason flood watches were issued for more than 5.4 million people across much of the West Coast, including Seattle and San Francisco.

More than 16 million people in the West are under wind alerts from the National Weather Service through at least Tuesday evening as the storm system pushes inland.

A high-wind warning is in effect for much of the Pacific Northwest, where widespread winds of 35 to 45 mph with wind gusts up to 70 mph are forecast or already occurring. In addition, wind advisories are also posted both in the Pacific Northwest as well as many other Western states.

“Strong, possibly damaging, winds…with gusts as high as 60 mph” are forecast for the Portland metro & Willamette Valley through at least 3 pm PST, according to the NWS in Portland. Along the coast gusts are forecast 50 to 70 mph.”

Some areas are already seeing wind gusts of 76 mph, equivalent to a Category 1 hurricane.

Some of the top wind gusts included 90 mph in Walker, California; 84 mph in Cambridge, Idaho; and 82 mph in Wagontire, Oregon.

Strong winds in Portland could knock down trees that have been weakened by weather extremes in recent years, arborist Colin Bourgeois told CNN affiliate KATU.

“The consecutive dry summers that we’ve had, especially the heat events like the heat dome, that really damages trees and it takes up so much of their energy to fuel their immune systems to fight off pathogens,” Bourgeois said.

Areas to the west of Portland have seen up to 6 inches of precipitation in the past 24 hours, and the city on Monday broke a record for the date.

Portland recorded 2.12 inches of rain, topping the record of 1.08 inches set on December 26, 1996. Monday was the third-rainiest December day on record in Portland.

The greatest flash-flooding concerns are for the western foothills of the Sierra Nevadas, as well as the coastal portions of southern Oregon down through the Bay Area and to Los Angeles County.

Moderate to heavy rain has been falling across portions of the Bay Area since Monday night and is expected to keep falling for several days.

The storm will bring a temperature drop of 15-20 degrees to Southern California.

“Say goodbye to the warmth,” the National Weather Service in Los Angeles tweeted Monday. “Big drop in temperatures on track between today and tomorrow (Tuesday). Expect 15-20 degrees of cooling thanks to the approaching storm system.”

Temperatures could get as low as 49 on Wednesday night in Los Angeles, the weather service predicted.

“Seas have built to between 16 and 22 feet along the Northwest California coast,” the office in Eureka said on Twitter. “This is causing dangerous marine conditions, but also bringing large surf to the coastline. Please stay far back from the surf and off of rocks/jetties.”

In terms of snowfall, winter storm alerts have been issued for 11 Western states.

Over the next five days, lower elevation areas could see between 2-10 inches of snowfall with isolated areas getting 12-24 inches.

Snowfall in higher elevations could be between 1-3 feet with isolated areas seeing over 3 feet.

California is off to a fast start with snowpack, a critical source of water and good news for some improvement in drought conditions. As of late last week, the state’s snowpack was running more than 150% of normal, according to the California Department of Water Resources.