Governor Newsom Issues State of Emergency Ahead of “Bomb Cyclone” 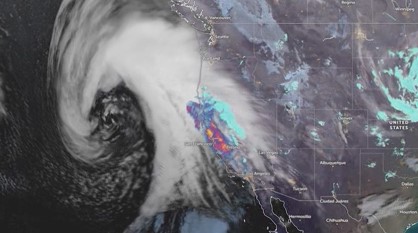 “We are in the middle of a flood emergency and also in the middle of a drought emergency,” California Department of Water Resources Director Karla Nemeth said. “This is an extreme weather event and we’re moving from extreme drought to extreme flood.”

They call it a “bomb cyclone.”

Millions of Californians brace for yet another extreme winter storm, keeping much of the state locked indoors.

In Northern California, last week’s storm turned deadly and many are still recovering from heavy flooding which blocked Highway 99.

“This river obviously created a major flooding challenge in the closure of Highway 99,” California Natural Resources Secretary Wade Crowfoot explained. “Sacramento County is out in that area today working to close that breach and protect the local area from the coming storms.”

San Francisco is bracing for what could be one of the worst storms in the city’s history and Mother Nature has the upper hand.

“The water went straight into my building the other day so I’m hoping to prevent that this time around,” San Francisco Merchant Tom Griffing shared.

But the state is prepared.

In the meantime, the state says stay dry, stay safe and stay indoors.

“During the height of these storms, the safest place to be is off the road and at home,” Secretary Crowfoot said. “Be prepared particularly for power outages given the high winds and saturated soils. Thirdly, check up on your neighbors, particularly your vulnerable neighbors, your elderly neighbors, your folks that may be bound in home. Really important that we help each other stay safe during this drought.”

CAL FIRE says a limited number of unfilled sandbags are available at nearby fire stations to help locals prepare now.

You can find the closest station here.