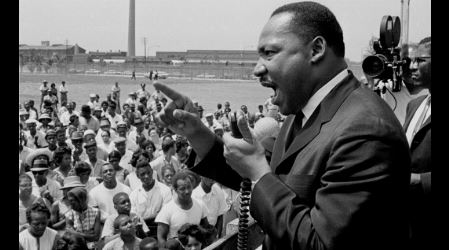 This afternoon, one local committee commemorated Martin Luther King Jr. on what would have been his 94th birthday.

“It’s important that we continue to honor and teach the legacy of Martin Luther King for generations to come. So we don’t forget our history, how far we’ve come and how far we need to go.” says Waymond Fermon, a Councilmember for the City of Indio.

Every year, the event is hosted in a different city. This year’s celebration resided in Indio.

Residents from all over the valley were in attendance, including local officials from almost every city.

“For the Coachella Valley, a very important event. We live in a very diverse valley. However, we still have a ways to go and one of my goals here in the city of Indio is to bring Dr. Martin Luther King street to the city.” Fermon says.

This street would be the second to honor Dr. Martin Luther King, Jr. in all of Riverside County, making it the first in the Coachella Valley.

One new feature that guest speaker and city of Indio Councilmember Waymond Fermon added, was to choose one person in the community for their Lifetime Achievement Award.

This year’s winner was 94-year-old Mary Alice Hearne, who Ferman added is a grandmother to the entire community.

For the committee, today was about honoring MLK’s work for the entire American population.

Even with multiple guest speakers, those in attendance made today even more special.

“The highlight of today’s event were the people that came out to participate, it’s the folks that come to participate that make it a highlight.” Crawford says.