A teenage mother and her 10-month-old baby were gunned down while running from a ‘cartel-style execution’ in central California that left 6 dead, police say 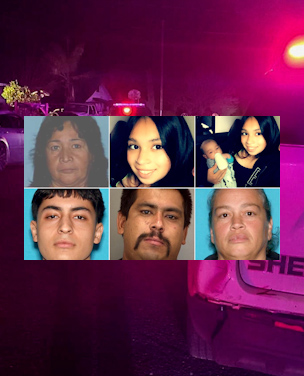 (CNN) — A young mother was clutching her 10-month-old son and running for safety when they were both gunned down during a horrific attack that left six dead in a small central California community, the sheriff said.

Forensic evidence shows a shooter stood over 16-year-old Alissa Parraz and her son Nycholas and shot both of them in the head, Tulare County Sheriff Mike Boudreaux said during a news conference Tuesday.

“I know for a fact that this young lady was running for her life,” Boudreaux said.

The teen was fleeing a home where at least two suspects had opened fire in what the sheriff described as a “cartel-like execution.”

The four other victims in Monday’s attack were identified as Marcos Parraz, 19; Eladio Parraz, 52; Alissa’s grandmother, Rosa Parraz, 72; and Jennifer Analla, 49, a close friend of a family member who survived the shooting.

The victims were targeted just before 3:40 a.m. at home in Goshen, California, a small farming community about 30 miles southeast of Fresno, the sheriff said.

“These people were clearly shot in the head, and they were also shot in places that the shooter would know that quick death would occur,” Boudreaux said Tuesday.

The home was known to law enforcement for illegal activity, Boudreaux said.

Three people survived the shooting by hiding, and they have been speaking to law enforcement, Boudreaux said.

The killings have shocked the Goshen community, the sheriff said, but he assured residents, “This was not a random act of violence. This was a very specific targeted act of violence. So, I don’t want the community to be scared or worried.”

Authorities in California are searching for at least two suspects and have offered a $10,000 reward for information that could lead to their arrest.

Boudreaux asked local businesses and homes to share any surveillance footage their cameras may have caught between 3 a.m. and 5 a.m. Monday.

3 survivors hid as they heard shots ring out

Investigators have already collected hundreds of pieces of evidence from the crime scene, Boudreaux said during Tuesday’s news conference, adding that detectives are working around the clock on forensics.

The three people who survived the shooting are relaying key details to authorities, he said.

One survivor described hearing shots ring out in the home as he lied flat inside a room, pushing his feet against the door to keep it closed, Boudreaux said. He heard at least one of the shooters rattling the doorknob before they walked away.

“He was in such a state of fear that all he could do was hold the door, hoping that he was not the next victim,” Boudreaux said.

The two other survivors hid in a nearby trailer, where one of the victims was shot in the threshold of the trailer door, Boudreaux added.

“Fortunately, the two suspects in this case never entered that trailer. … So we have three surviving victims, who are providing a great deal of information,” Boudreaux said.

As authorities are gathering evidence they aren’t able to release everything they know because the suspects may be watching, the sheriff said.

“We will be slow, methodical, accurate, precise … we will make sure that when we make these arrests that this investigation for the victims — these people will be held to justice,” Boudreaux added.

Roughly two weeks before the shooting, deputies with the Tulare County Sheriff’s Office found shell casings outside the home on January 3 when they were attempting to conduct a parole compliance check, the office said in a news release emailed to CNN.

Compliance checks are done by law enforcement on people who are on felony parole to ensure they’re following the law, Boudreaux explained.

At the time, deputies asked to go inside the home but people at the house refused. Deputies returned with a warrant and found marijuana, methamphetamine, guns and body armor, according to the news release.

Eladio Parraz, one of the shooting victims, was arrested for being a felon in possession of ammunition, firearms and a controlled substance, the sheriff’s office said. He was released on bail four days later, the release said.