Second Vigil For Slain Deputy To Be Held in Murrieta 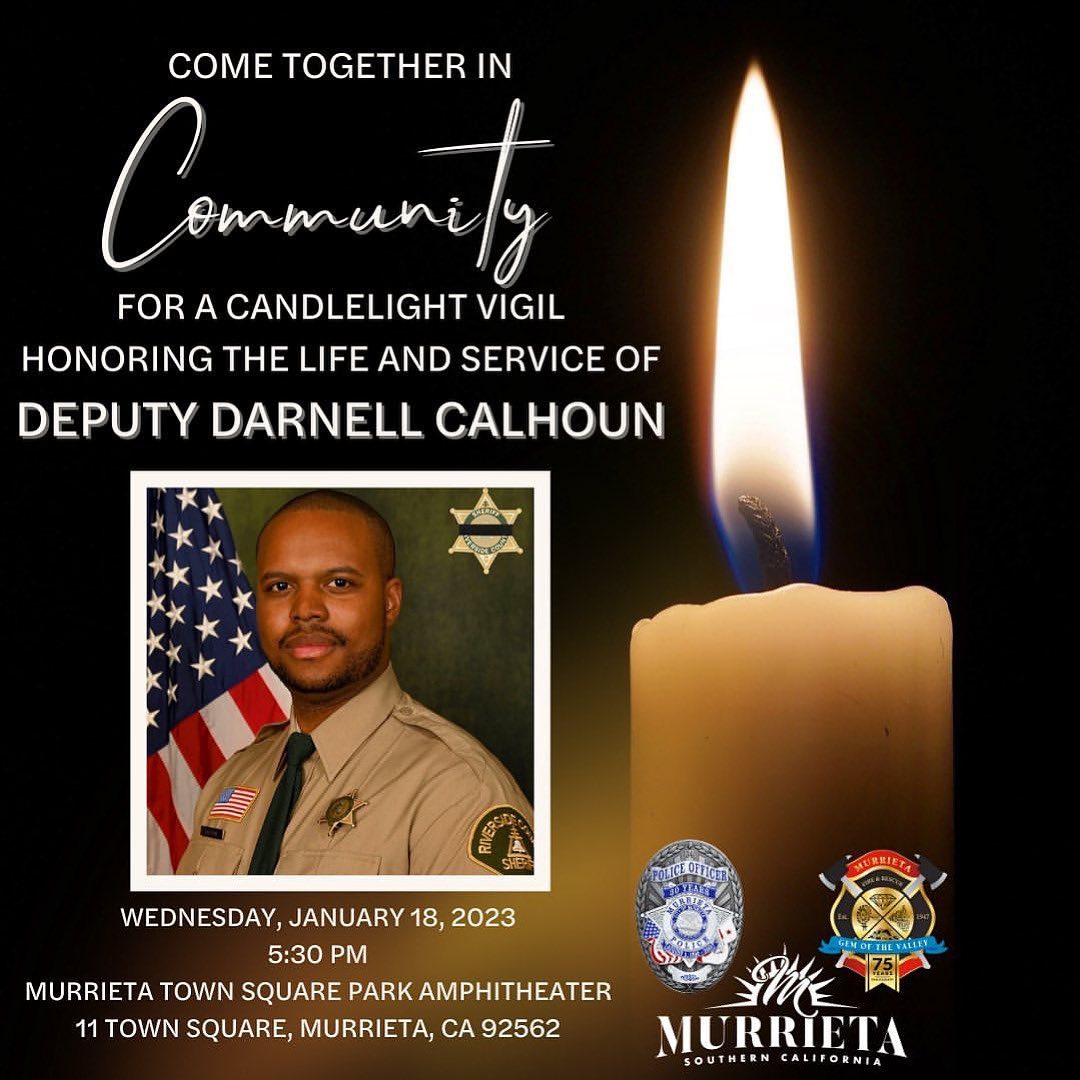 (CNS) – A vigil will be held in Murrieta Wednesday in memory of slain Riverside County Sheriff’s Department Deputy Darnell Calhoun, who was raised in the city and whose parents own Calhoun’s Texas Family Barbeque.

The vigil is set to begin at 5:30 p.m. at Town Square Park Amphitheater at 11 Town Square. Limited candles will be provided. The department is encouraging attendees to bring their own candles, with battery- powered flameless candles a safe option.

At least 150 people crowded the front of the Riverside County Sheriff’s Department’s Lake Elsinore station Tuesday night for a vigil for Calhoun, who was fatally shot Friday when responding to a domestic disturbance call in Lake Elsinore.

Savage then led a prayer, which was followed by inspirational music, as spectators clad in jackets listened on the chilly night, according to the newspaper.

The vigil included a song, “Hymn of Heaven,” with acoustic guitar accompaniment.

“It takes a special kind of person to be able to come to work everyday knowing that you could sacrifice your life for someone else and leave your family behind,” Sheriff Chad Bianco said. “Darnell was that kind of man who came to work to protect people.”

Riverside County Supervisor Karen Spiegel said she would never say the name of suspect Jesse Navarro “because any murderer who takes the life of law enforcement — or an attempt on that life — should never be given the dignity of having his name said out loud.”

“We all need to continue to rally together, rally around his (Calhoun’s) family as a community and wrap our arms around this very special, grieving family,” Spiegel said.

Lake Elsinore Mayor Natasha Johnson said Calhoun’s “sacrifice reminds us of the ultimate price our law enforcement officers are willing to pay to keep our families, and our communities safe.”

“His service and dedication will never be forgotten,” Johnson said. “And we will always remember the sacrifices he and his family have made.”

David Warnick told The Press-Enterprise he knew Calhoun since he was 5 years old and called him “well behaved” and “mature” as a child.

“It breaks your heart,” Warnick told The Press-Enterprise. “It definitely hits.”

Calhoun was assigned to the Lake Elsinore station after he laterally transferred from the San Diego Police Department nearly one year ago.

A “Help A Hero” fundraiser for Calhoun’s family has been established. As of Wednesday morning, $206,924 in donations have been made. Donations can be made at helpahero.com/campaign/deputy-darnell-calhoun.

Funeral plans have not been announced.