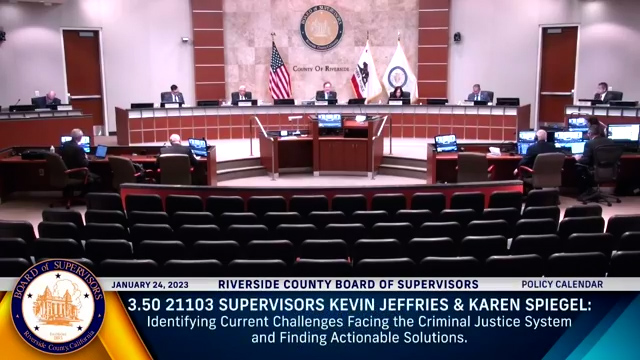 (CNS) – The Board of Supervisors Tuesday directed the Executive Office to identify possible solutions to the cascade of court dismissals in Riverside County and request that California’s chief justice meet with local officials for a reality check on the impact resulting from the county’s deficit of judicial resources.

“Our system of government does not work without a functioning court system,” Supervisor Karen Spiegel said. “This board needs to engage on the issues and find solutions. We’ve been talking about it. Now we have to do something about it.”

Spiegel joined with board Chairman Kevin Jeffries in bringing forward the proposal to stop mass dismissals by way of policy changes and increased state appropriations.

“This is a state-level issue that we’re going to have to press the flesh on,” Jeffries said.

The board voted 5-0 to direct the Executive Office to join with the District Attorney’s Office, the Office of the Public Defender, the Department of Probation, the Sheriff’s Department and the Superior Court Executive Office to compose a report underscoring the shortcomings that have precipitated the avalanche of case dismissals and what near- and long-term measures might be applied to fix the conundrum.

D.A. Mike Hestrin has characterized the dismissals as a significant public safety threat that “is going to cause extreme harm to victims of crime and our community at-large,”

The Association of Riverside County Chiefs of Police and Sheriff — ARCCOPS — has called for an immediate end to the practice.

In their proposal, Jeffries and Spiegel wrote that “case dismissals deny victims of crime their right to be heard, fail to hold the guilty accountable or exonerate the innocent.”

“These dismissals are simply the latest evidence of a criminal justice system that has exceeded its capacity,” the supervisors said.

The board ordered the Executive Office to report back in 45 days on the results of its meetings and research. Jeffries will additionally send a letter requesting that California Supreme Court Chief Justice Patricia Guerrero visit the county as soon as possible to discuss options for resolving the crisis.

Lastly, the board will co-sponsor legislation advanced by Sen. Richard Roth, D-Riverside, to increase the number of judicial positions under a revised assignment formula that captures the reality of the county’s population growth and public safety needs.

Roth’s proposal is Senate Bill 75. It replicates measures that he’s introduced in the past.

As of last week, 1,371 criminal cases had been booted by judges countywide since the second week of October, according to the D.A.’s office.

Figures indicated 93% of vacated cases have been misdemeanor filings. DUIs accounted for the highest number of dismissals at 36%, followed by domestic violence complaints at 26%. Assault filings made up about 5%, and sex crimes were near the bottom at 2%, according to data.

The dismissal binge began on Oct. 10. Most of the cases were added to dockets during the public health lockdowns, when courts suspended many operations under emergency orders from the California Office of the Chief Justice.

Judges have been generally citing lack of available courtroom space for trials as the main reason for the dismissals.

At the time, the Superior Court virtually halted civil jury trials for months while judges focused on reducing the strain. An empty elementary school was even converted into a makeshift courthouse.